“We’re in a good spot as far as where the program stands,” D’Amour told Tech Sideline. “We feel like we’ll be able to compete with anybody in the upcoming years. Of course we have big shoes to fill with the graduates we lost this year, but that’s college athletics. We have a good nucleus coming back and I’m excited about our incoming players.”

That returning core includes nine of the top 10 hitters from a team that finished third in the ACC in batting average last season (.314). 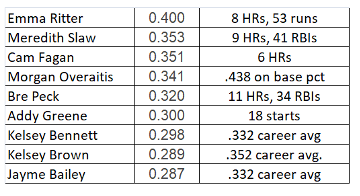 But the Hokies will have to fill a leadership void left by departing fifth-year seniors Mackenzie Lawter (170 starts) and Darby Trull (189 starts, .324 career average). During her last four seasons, Lawter started 161 out of a possible 165 games and was once described by D’Amour “as good as they come behind the plate.”

Junior Emma Yates is a possibility at catcher as are two incoming freshmen, Kylie Aldridge and Megan Furr. Tech Sideline featured the 2022 class, which will be on campus in Blacksburg come fall, on July 7.

However, the biggest concern for next year’s team will be in the circle. Two-time All American pitcher Keely Rochard, who won 97 games for the Hokies and struck out 1,120 batters during her five-year career, has graduated. On top of that, both Ivy Rosenberry (5.16 ERA in 19 innings) and Mackenzie Osborne (4.88 ERA in 14.1 innings) entered the transfer portal.

However, ACC Freshman of the Year Emma Lemley (2.12 ERA and 212 Ks in 139 innings) returns and will move in the role of the VT ace. Lemley, who just helped Team USA win the Canada Cup, recently told WDBJ7 that she is already ready for that role.

Grein, from Mokena, Ill., was named the Southwest Suburban Red Conference Player of the Year. She finished her high school career with an overall record of 45-6, striking out 546 batters in 374 innings with an ERA of 0.99.

From Beaver, Pa., List was a three-time player of the year in her area and compiled a two-year record of 38-1 with 504 strikeouts in 254 innings.

Although D’Amour keeps a watchful eye on the transfer portal, the VT staff is not going to make it a habit of depending on transfers to shore up the program.

“The transfer portal seems to be a hot topic these days,” D’Amour said. “We are aware of all of the players that are transferring around the country. We have had quite a few kids join our program in the past, and they’ve all been great people and players. But two major components of our program are recruiting at a high level and player development. We knew that our center fielder, catcher and starting pitcher were graduating this year, so we recruited based on filling those spots.

“If we have to rely on filling our roster with three, four or five transfers a year, I need to fire my recruiting coordinator or fire myself because we aren’t doing a good job recruiting, making kids better on the field, or treating them well off the field. The portal is great for players looking for playing time, pursuing a different degree, or just looking for change or scenery. If we have mutual interest with a player in the portal, we’ll pursue them, but I feel confident in our ability to recruit (and develop) high-end high school players to Virginia Tech.”

Despite being eliminated in the NCAA Super Regionals, Virginia Tech ended last season ranked No. 2 in the NCAA RPI — in no small part because of a strength of schedule that was No. 7, a 14-8 record against teams in the top 25 of RPI and a 7-1 mark against teams ranked 26-50.

D’Amour plans to continue scheduling aggressively, and ESPN announced that Virginia Tech has been invited to participate in the prestigious TaxAct Clearwater Invitational on February 16-19. Of the 16 teams invited, 15 qualified for the NCAA Championship in 2022. Three programs — Arizona, Oklahoma State and UCLA — advanced to the Women’s College World Series.

“We also play Duke, Notre Dame, Clemson and Florida State in-conference this year,” D’Amour said. “We’ll have plenty of RPI games when you add in Clearwater, as well as some other games we’re working to schedule.”