Virginia Tech was in a familiar position on Wednesday night in College Park. It struggled to shoot the ball, yet hung around thanks to stifling defense that kept it a two-possession game.

Then the Hokies found their rhythm. Trailing by seven with 11:58 to play at Maryland in the Big Ten/ACC Challenge, they tucked their shirt into their shorts and went to work.

Coming out of a Mike Young timeout, the Hokies were just one-of-10 from the floor in the second half. Over the remaining 12 minutes, they hit ten of their 18 field goal attempts while holding the Terrapins to three-of-17 shooting. That included a period of 5:36 where Tech was a perfect eight-for-eight and Maryland was just one-for-seven.

Thanks to that stretch and making nine of its last ten field goals, Virginia Tech (6-2) bounced back from a poor second half start to knock off Maryland (5-3) 62-58 in the XFINITY Center.

“We weren’t very good, but something turned on,” Young said to Jon Laaser and Mike Burnop on the Virginia Tech Sports Network afterwards. “We haven’t found our legs here offensively, but this bunch’ll grind on ya, and they’ll defend time and time and time again.”

That defense kept the Hokies in the game. Though Terrapins center Qudus Wahab had 18 points and was seven-for-eight, the rest of Maryland was just 17-47 (36%). The Terps turned the rock over 15 times, only had six assists on 23 made shots and made just one of their 13 three-point attempts.

Tech entered Wednesday night’s clash of former ACC rivals with a solid three-point defense rating, and that prowess was on display once again. Even when the Hokies struggled to shoot the ball, which was most of the game – VT was 12-32 (37.5%) in the first, 11-28 (39.3%) in the second – they frustrated Maryland on its home floor.

Foul trouble for Wahab was huge. He finished with seven rebounds to complement his scoring, but he barely played in the second half due to foul trouble. Though he had just one at halftime, he picked up two in five minutes (his first one in less than 90 seconds), sat from 15:02 until 10:00, and picked up his fourth with 8:52 to play.

Most of the Terrapins’ offense ran through Wahab in the first half, but his absence from the court for a large portion of the game allowed Virginia Tech to find its rhythm. Though he disrupted Tech inside for the majority of the first 20 minutes, Keve Aluma, Justyn Mutts and David N’Guessan found ways to answer with him on the bench down the stretch.

Aluma posted his second double-double of the season with 17 points and 12 boards, and Mutts was effective in every facet of the game. He finished with 16 points (6-12 FG, 2-3 3FG, 2-4 FT), four rebounds, two assists and two steals. Most importantly, he made plays that didn’t show up in the stat sheet, particularly defensively.

One specific instance that stood out was his steal with 6:17 remaining. Tech poked the ball away from Maryland’s Eric Ayala and Mutts scooped it up with a chance to speed up the game and drive to the rim at the other end.

Instead, he helped Tech take a deep breath. The veteran, who is an important leader on this Hokies team, slowed it down and kept his dribble in front of the Hokies’ bench, allowing his team play its style of basketball.

That possession handed Virginia Tech the keys to the game. The ball found Hunter Cattoor on the right wing, who swung it up top to point guard Storm Murphy.

After a few difficult games against tough competition, the Wofford transfer grew into the game in Maryland. He finished with four assists, two rebounds and just one turnover, and he seemed to find his flow after struggling early.

“He played the position tonight,” Young said of Murphy. “He was a point guard tonight.”

With the ball in his hands at the top of the arc, Murphy drew three – not one, but three – Terrapin defenders and hit Nahiem Alleyne with a bounce pass on the left wing. His three gave the Hokies the lead and they never trailed again.

Tech hit eight straight field goals, expanding the lead to seven, before missing and opening up the game to a 6-0 Terps run that cut it to one with :52 to play.

It was all Hokies, though. They almost lost the ball in the corner after being trapped with :28 to go, but Cattoor called timeout, and Mutts scored off an inbound play. Maryland missed a three at the other end, Mutts hit a free throw to extend the lead to four, and Virginia Tech walked out of the XFINITY Center with a four-point win, the program’s first in College Park since 2011.

“You’ve heard me say it many times: ‘I have a really good basketball team,’ Young said. “Will we be better? Yes, we will, but a really good win for our team.”

Up Next: Wake Forest

The Hokies host the Demon Deacons (7-1) on Saturday at 2 p.m. from Cassell Coliseum. Wake Forest was one of six ACC teams to win their game in this week’s challenge, holding on for an 80-77 overtime win over Northwestern on Wednesday in Winston-Salem.

Transfers Jake LaRavia and Alondes Williams each posted 21 points and combined for 15 field goals on 25 attempts, while the Demon Deacons shot 46% from the floor and shut the Wildcats down in overtime.

For more on Wake Forest and Steve Forbes, an old friend of Mike Young, check out our preview of this week’s games. 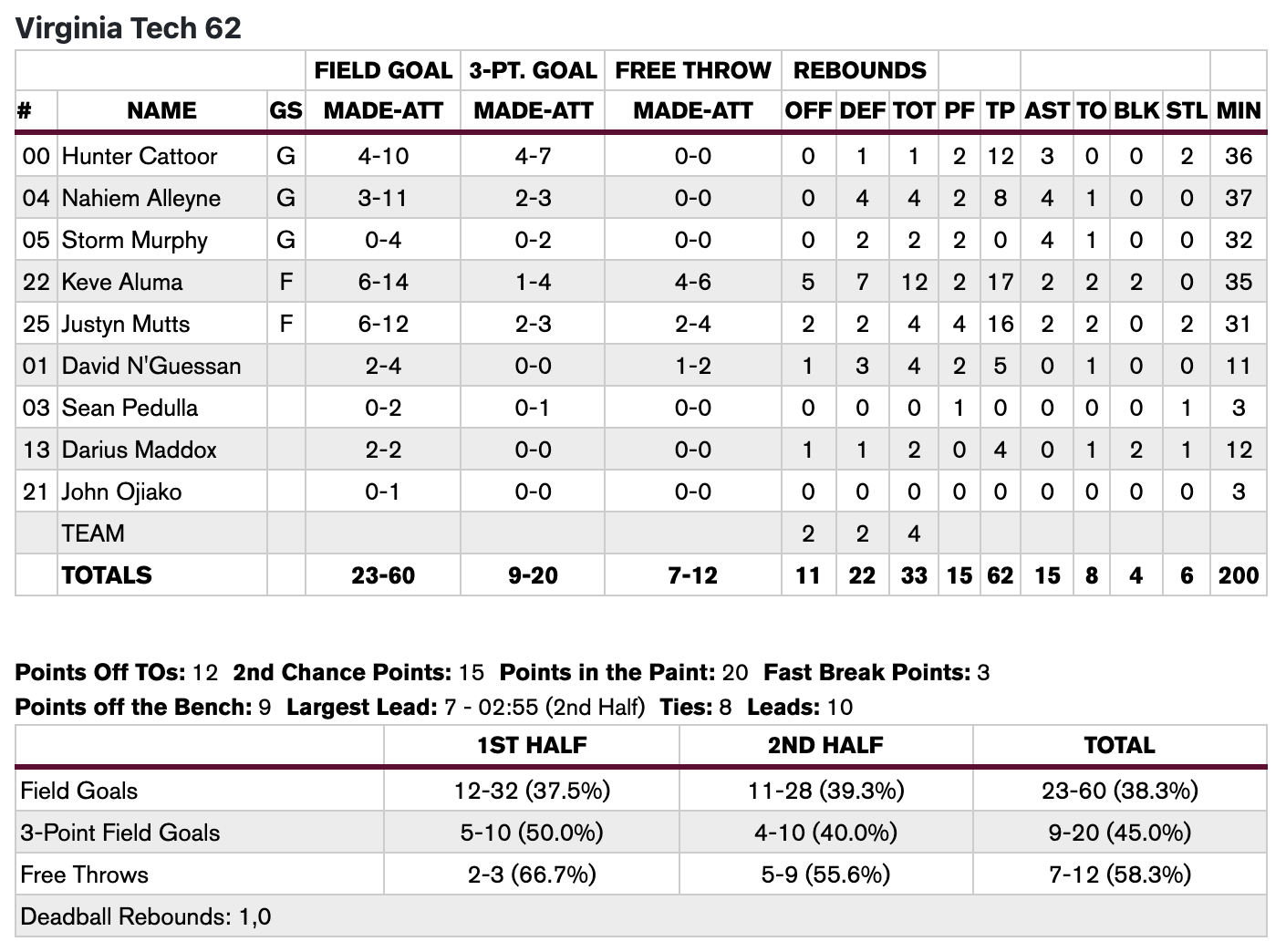 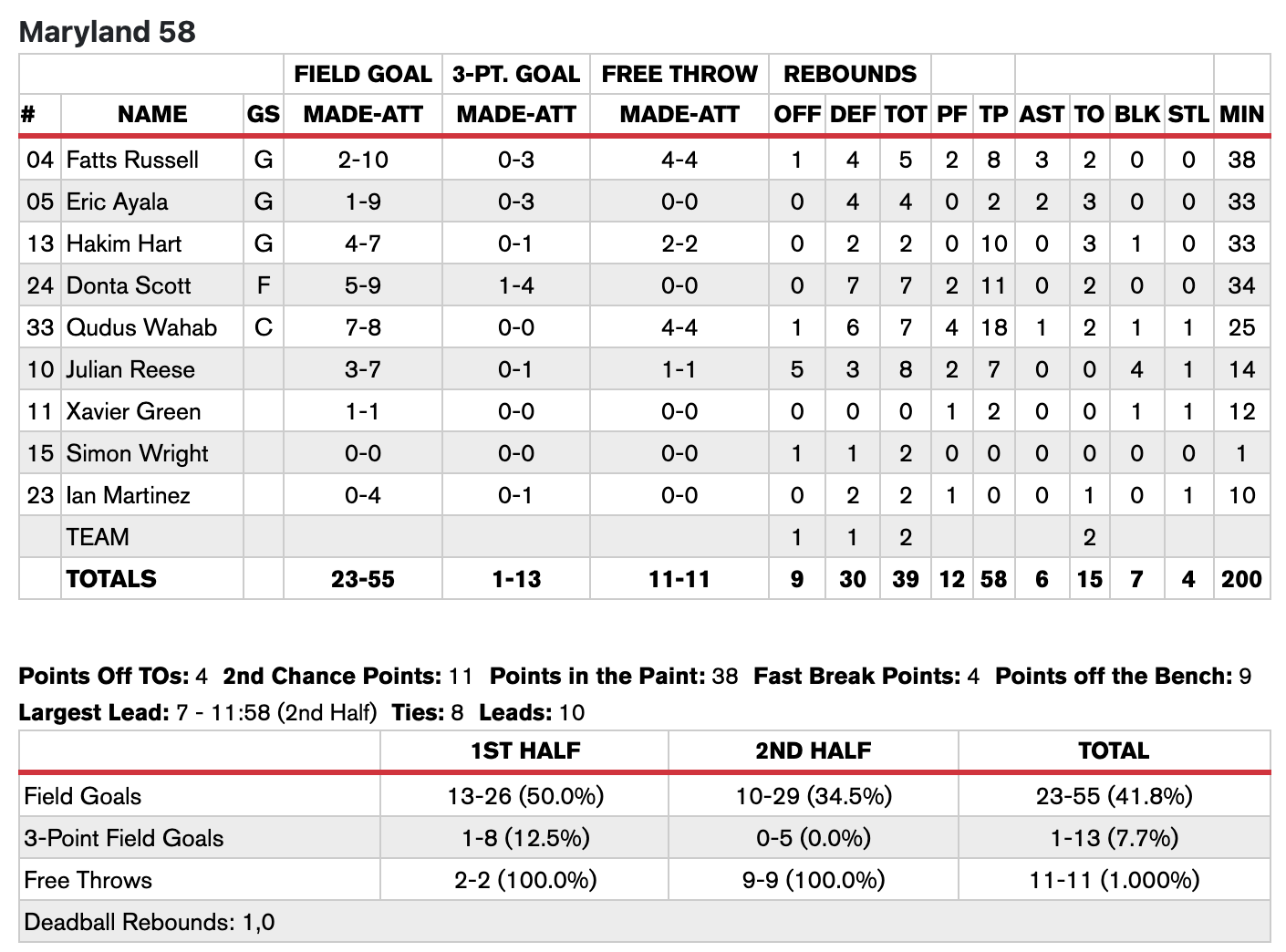