Virginia Tech came up emptyhanded in Brooklyn last week in losses to Memphis (69-61) and Xavier (59-58). The Hokies (5-2) were really challenged for the first time this season and it showed, particularly against the Tigers’ physicality.

Now, Mike Young & Co. turn their attention to two interesting benchmarks: Maryland in the Big Ten/ACC Challenge on Wednesday and Wake Forest to open conference play on Saturday. Let’s preview both of those games.

Has it really been over seven years since Maryland left the ACC and officially joined the Big Ten? Wow.

The Hokies and Terrapins have met 42 times previously, and it’s the first matchup since March 4, 2014, a game the Terps won 64-47 in College Park. They’ve won the last five games in the series, too, dating back to January 2012. Tech’s last win came in February of 2011, when all five starters – Malcolm Delaney, Erick Green, Terrell Bell, Jeff Allen and Victor Davila – scored in double figures in a 91-83 rout of Maryland in Cassell Coliseum. 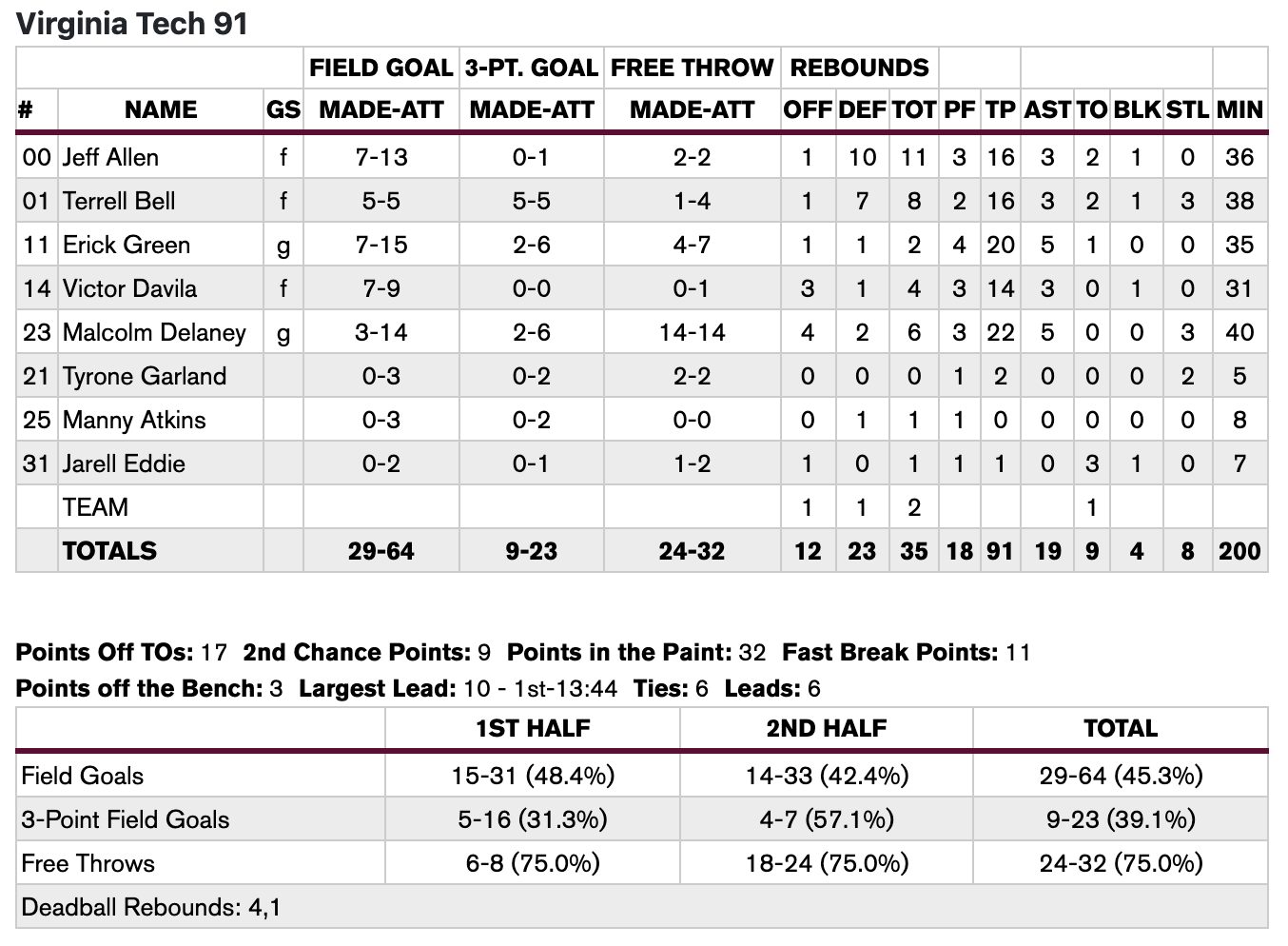 Speaking of which, remind me how that Virginia Tech team (21-11, 9-7 ACC at the end of the regular season) didn’t make the NCAA Tournament? If I remember correctly, I think it had something to do with going 9-4 with a poor non-conference schedule, plus losing to a poor Georgia Tech team and Boston College twice.

Spoiler alert: That “poor non-conference schedule” isn’t happening this year. The Hokies have a loaded slate between now and New Year’s with five top-100 KenPom teams in seven games. Note that Dayton at 107 is just outside of that range. Cornell (225) is the one outlier. Tech already played Memphis (28) and Xavier (33), too.

But back to the series history. Virginia Tech and Maryland used to have some elite games. I remember listening to Bill Roth and Mike Burnop call Tech’s 104-100 loss in double overtime in the car with my mom on the way back from the store in 2010. Greivis Vasquez dropped 41 (13-33 FG) in that game.

Usually I’d dive into his history, some of his philosophies, the team’s past performances and its roster, but since we’re previewing Wake Forest too, I’ll condense everything into one section here.

Mark Turgeon has been around the block, and he’s won everywhere he’s gone. Wichita State, Texas A&M, Maryland, you name it. He’s been in College Park since 2011, and he’s brought back the Maryland culture that many came to know under Gary Williams. His bio on Maryland’s website is very impressive.

After a really good 2019-20 season, in which the Terps won the Big Ten and then the world shut down due to COVID-19, Maryland went 17-14 last year. Turgeon has never won fewer than 17 games in each of his previous ten seasons, and his squad looks to be talented in 2020-21. Maryland’s schedule is killer, however, with a brutal non-conference stretch and a gauntlet in the Big Ten.

The Terps have already played Richmond (86-80, W) and Louisville (63-55, L), two top-75 teams, per KenPom, and all but four games on their schedule between now and March are top-100 teams. For comparison, Tech has all but seven (Pitt x 2, Boston College, Miami x 2, Cornell and Dayton).

Maryland has started the same five players in all seven games so far this year, just like Virginia Tech. It’s a very experienced bunch:

Here’s a good video to watch if you want to get a quick snippet of how Maryland plays in about five minutes. It’s a clip from the Terps’ game vs. George Mason, which they lost 71-66.

A few things that stand out:

Last season, the Hokies were blown up by Penn State in a 20-point loss in the Big Ten/ACC Challenge. It was the first time they had faced a team that was physical and athletic. This season, that’s not the case, especially after Tech’s test with Memphis. Young & Co. are much more prepared for this game than they were against the Nittany Lions last year.

“They [Maryland] haven’t shot the ball very well,” Young said on Tech Talk Live on Monday. “[Eric] Ayala is a knockout shooter. Even Ayala, as good as he is, his numbers are paltry right now, he’s down around 28, 29, maybe 30%. Fatts Russell, transfer from Rhode Island, is really dynamic and fast as he can be in the open floor, is only 4-17 from three. No. 13 [Hakim Hart], their small forward, is a kid that can get going, but he’s struggled here a bit late.

“[Qudus] Wahab is a load in the post. I think that’s a favorable matchup. As good as he is, he’s a Georgetown transfer. As good as he is, we think he’ll have as much trouble guarding Keve [Aluma] as we’ll have guarding him. I think No. 24 [Donta Scott], Mutts is a good matchup for us. It’s Maryland, it’s the Big Ten, very well coached. We’ll have our hands full, but we feel good about it going up there.”

Mike Young and Steve Forbes go back about five years to when Forbes started coaching at East Tennessee State. At the time, Young was at Wofford, so the two SoCon rivals squared off frequently. Now, both of them are in the ACC.

Forbes didn’t have as easy of a first season in Winston-Salem as Young did in Blacksburg, but there is clear improvement with the Demon Deacons. They’re a better offensive team in year two, and combining Alondes Williams and Jake LaRavia from the transfer portal with Daivien Williamson and Isaiah Mucius has worked well thus far.

Wake Forest is 6-1 through seven games this season, though only two opponents have been in the top 115 of KenPom: Oregon State (80-77, W – OT) and LSU (75-61, L). It was a good showing against the Beavers, but the Tigers were just too talented. It’ll be intriguing to see how this edition of Forbes’s group matches up with Young’s team in the first conference game of the season this Saturday.

Something to keep in mind: Due to ACC scheduling, this is the only time these two programs will meet this season. Once on December 4. That’s it.

Tech’s won the last six matchups in this series dating back to March 2017. The Hokies lead the all-time series 38-31 and are 15-7 in the ACC. Young is 3-0 against Wake Forest, too, and last year’s margin of victory (38 points) was crazy. It will be closer this season.

The Demon Deacons’ starting five has been the same through seven games this year:

Some quick takeaways from Wake Forest:

Similar to the Maryland game, staying out of foul trouble is important, and if Tech can get hot from three, it’ll help them pull away. Rebounding is going to be an important factor, but if the Hokies can be disciplined and force some turnovers, it’ll play right into their hands.

“Wake Forest has improved,” Young said. “I haven’t seen them at all yet. I know they have a couple of new pieces that have made them a more difficult out. They had LSU last night, maybe Saturday night, in a tournament. Old friend down there that’s a whale of a coach.”