In the offseason, Young added an assistant to his coaching staff, which has impacted recruiting. He and his players discussed how having a veteran-laden team with tons of experience in Blacksburg is so crucial, and Young notes that this might be the best shooting group he’s ever coached.

Mike Young might say he’s been lucky, but he knows how to pick out his assistants. When he hired Mike Jones away from DeMatha back in May, he added a coach with experience with USA Basketball and great ties to high schools.

Jones had been at DeMatha Catholic High School for 19 years. A former player at Old Dominion under coach Oliver Purnell, who Young worked for at Radford in 1988, Jones had zero college coaching experience. So far, he’s been a great addition to Virginia Tech’s coaching staff, which includes assistants Christian Webster and Kevin Giltner.

“He has been nothing short of exceptional, and I had a gut feeling,” Young said. “I think everything that I had hoped to have from Mike, I’ve gotten that and more. … I know he’s not going to be around here very long. He’ll be a head coach because he’s that good, and I am delighted to have him in Blacksburg.”

“He’s definitely added a lot,” Keve Aluma said. “He’s a great guy and he knows the game super well, so to be able to learn some things from him and talk with him has helped me a lot.”

Jones has added a lot on the recruiting trail, too. On Sunday, the Hokies earned a commitment from Rodney Rice, a 4-star, 6-4 wing in the Class of 2022 from DeMatha. Jones’ relationships with high school prospects have clearly benefited Virginia Tech, which is on the rise in the recruiting world.

“This is an easy sell,” Young said. “This is a piece of cake. Recruiting is hard, I don’t care where you are. But you’re recruiting to a world class university, an unbelievable college community, the Atlantic Coast Conference, the opportunity to play… I think our staff has done a great job, from Chester [Frazier], Antwon [Jackson], now with Christian [Webster], Kevin [Giltner] and Mike [Jones].

“I feel really good about the people that we’ve brought here and what they’ve contributed to our program. We’ve got three committed now [in the 2022 class]. I’d like to have another one or two, but I think that part of it has been pretty damn good to this point.”

Keve Aluma, Justyn Mutts and Storm Murphy are all veterans, while it’s crazy to think Nahiem Alleyne and Hunter Cattoor are entering their third season in Blacksburg. Young has a starting squad that has a lot of minutes under its belt – 10,602 to be exact.

How much will the experience help the Hokies this season?

“Tremendously,” Mike Young said. “I don’t know that this is how it’s going to play out, but if we started tomorrow, we would start three fifth-year seniors: Storm Murphy, Justyn Mutts, Keve Aluma, and two juniors: [Hunter] Cattoor and [Nahiem] Alleyne. Those guys have seen a lot of plays and have been a part of a lot of winning, and it beats the alternative. I can tell you that those young ones can turn your hair white.”

In Young’s first season, the oldest players on the team that got consistent minutes were Wabissa Bede and P.J. Horne, two juniors. Multiple freshmen and sophomores came off the bench. In 2021-22, it’s a completely different story.

David N’Guessan received a lot of praise from Young on Monday – “he has arguably been our best person through our first five practices” – and he’s a sophomore. Darius Maddox and Clemson transfer Lynn Kidd have come along nicely and are also in their second season.

Even John Ojiako, who Young said is “healthy and is as fit as he’s been,” is a junior. Sean Pedulla and Jalen Haynes are freshmen, but the majority of the team is older. That’s going to pay off down the road.

Below is a table of Virginia Tech’s 2021-22 roster, color-coded by class, with the staff, a state breakdown and a class breakdown included, as well as a key on the right. 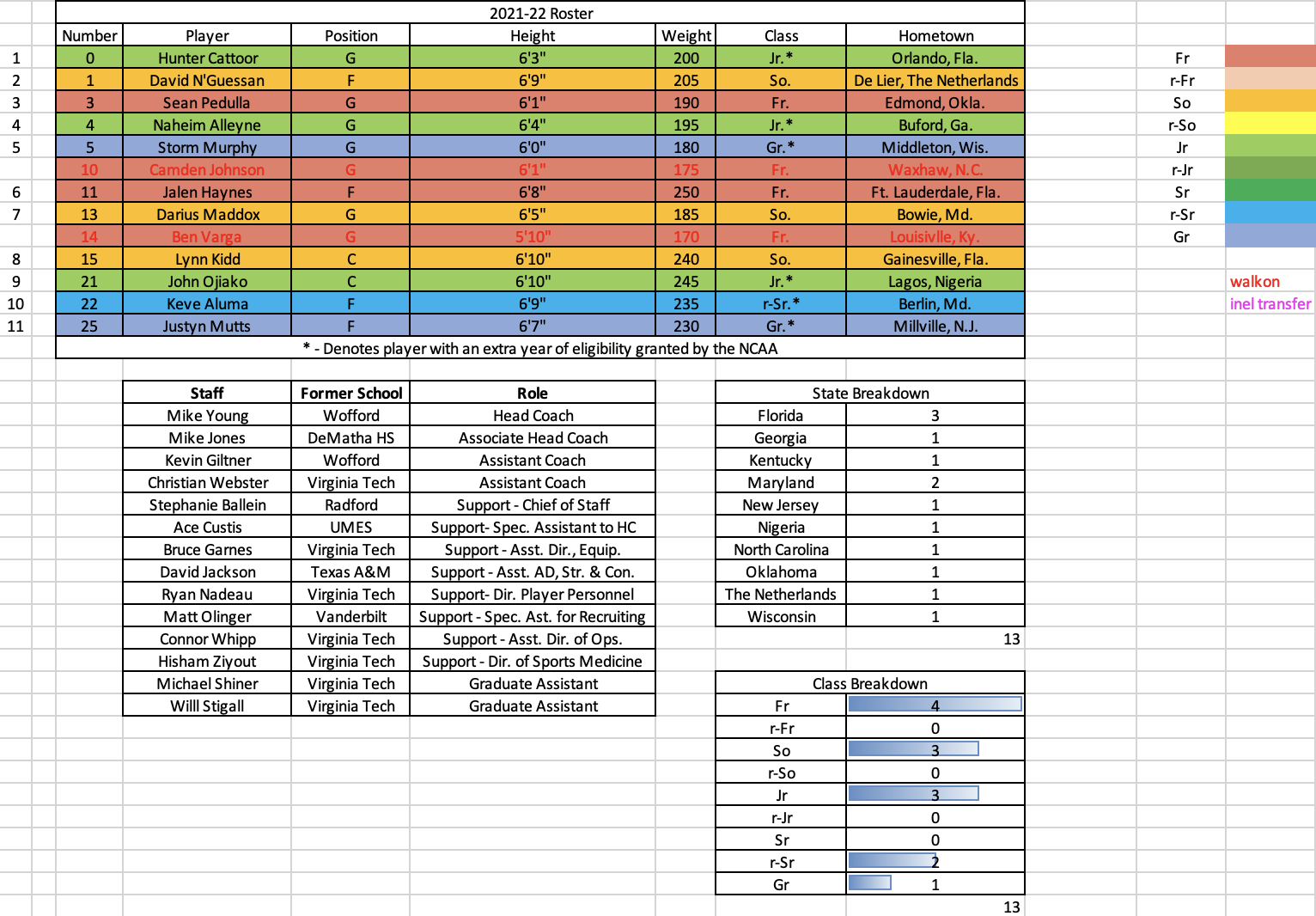 “It was painful at times going through it, but the experience and the reps that those guys had as young people and now to see them as his third-year guys,” Young said, “and boy, they’re doing really, really well.”

“I feel as though having that experience on our team is a really important thing,” Justyn Mutts said. “I don’t know who it was that said, ‘Get old and stay old in college basketball,’ but I definitely see the strength in that. You have years of experience with certain guys who know what college basketball is demanding of you, whereas, a lot of younger guys don’t necessarily recognize that high school basketball and college basketball really are kind of like two different games, and kind of having the opportunity to see that through for the full year [is a benefit].”

Unselfish Teammates And A Plethora Of Shooters

One of the other things that Mutts mentioned was how much his teammates want each other to succeed.

“We have so many guys that are so unselfish and so skilled at the same time,” Mutts said. “Those guys are drawing attention, but they’re not just looking to score all the time. We’ve got guys that are anxious to get other guys involved, to make other people better.”

It also helps when you have a point guard in Storm Murphy that lives for making the extra pass. A First Team All-SoCon nominee in 2020-21, Murphy averaged 4.3 assists per game. He really enjoys finding his teammates, which Mutts said he does a tremendous job of.

That’s important when you have a team that can shoot.

Tech has steadily improved shooting the ball. And now, entering 2021-22, Young said he thinks that collectively, this might be the best shooting team he’s ever had in his 36 years as a basketball coach. That’s scary.

“I don’t recall ever having a team where I was completely comfortable with all five guys shooting it,” Young explained. “I have a lot of things bouncing through my head on how best to utilize that. That’s very uncomfortable, nobody wants to guard a team that can do that. I typically have three, maybe four on the floor at the same time, but to have five…

“I saw Mutts make 82 of 100 before practice last week. Aluma’s shooting it at a high clip. That will certainly be a strong suit of this team. I’m really excited about the different things that we can do with them to exploit that.”