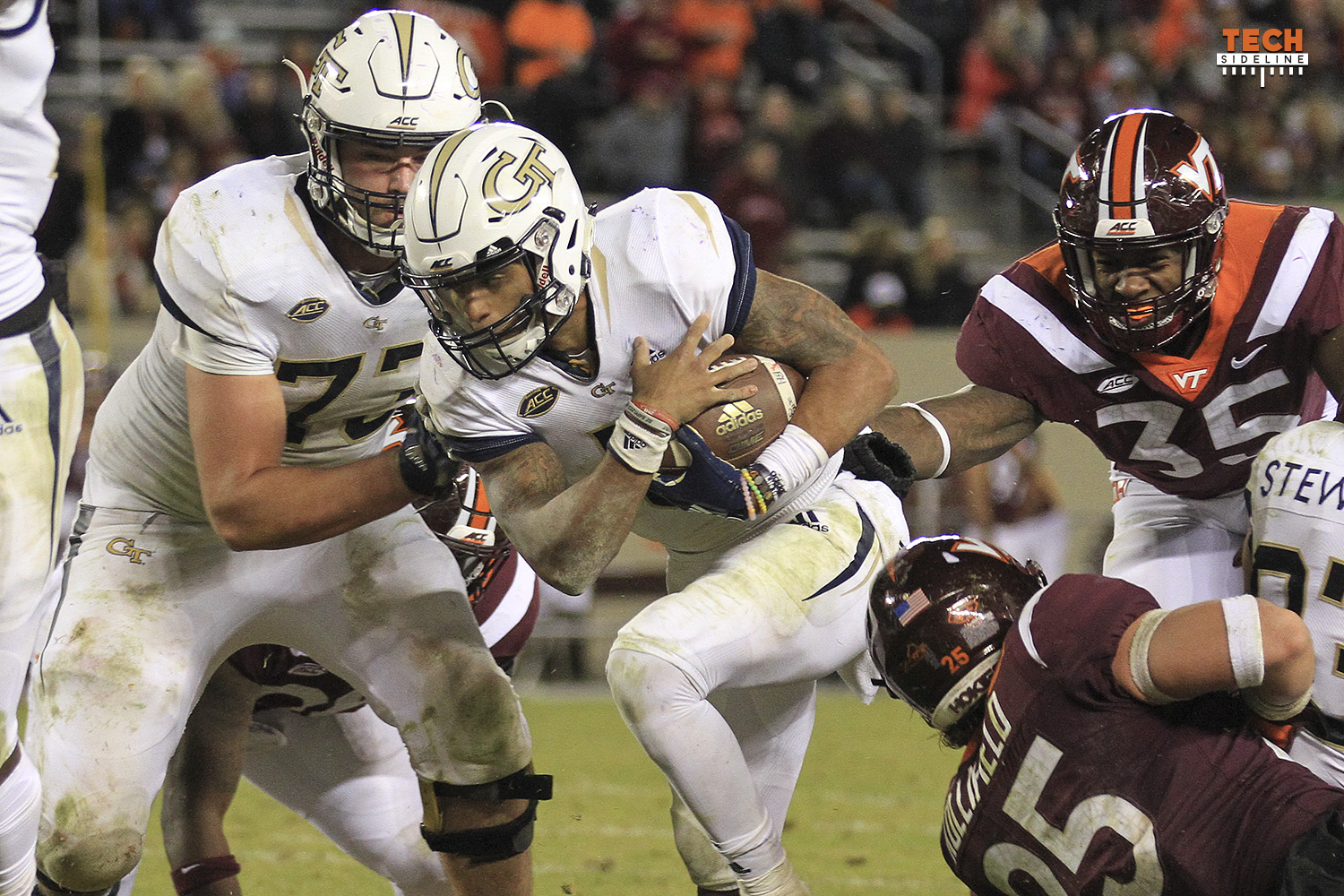 The Paul Johnson era is over in Atlanta, and as he retires he takes the triple option offense out of Power 5 football. Johnson left on a high note, leading the Yellow Jackets to a second-place finish in the ACC Coastal Division and a bowl-appearance for just the second time since 2014. Georgia Tech led the country in rushing yards per game (325 YPG), although that should be expected considering they threw the ball just 126 times, which ranked above only Georgia Southern and Army.

Most programs go through some restructuring when a new head coach is introduced, but Georgia Tech’s rebuild will be more extensive. New head coach Geoff Collins comes over from Temple where he was the head coach for two seasons. Collins’ Owls threw the ball 443 times last season, good for 34th in the country. Georgia Tech will have some growing pains with a new offensive system and a roster built for the old one.

The Yellow Jackets’ new offensive coordinator will be Collins’ OC from Philadelphia, Dave Patenaude. This will be an entirely new system for the offense, and that may be good news for the Hokies, who allowed 49 points to the triple option system last October. Johnson leaving creates a challenge this year for the new coaching staff to install the offense. However, this may reward the program in the long run by modernizing the system.

Typically, an offense returning just five starters would be seen as an issue, and for the Yellow Jackets, it still may be. However, with the turnover in players and the system, these less experienced players may be able to pick up the new concepts quicker. Georgia Tech loses its starting quarterback TaQuon Marshall and right tackle Andrew Marshall to graduation. The offense’s biggest loss may be guard Parker Braun, who transferred to Texas after an All-ACC campaign in 2018. There is good news along the offensive front for the Yellow Jackets as they return three starters, including 6’6” left tackle Zach Quinney, who started as a redshirt freshman.

Quarterback will be the position to watch in Atlanta this season, as for years the man under center for the Jackets wasn’t expected to be a great passer. Now, Patenaude will expect consistent passing ability from his quarterback. It looks like when the season starts against Clemson, he will be sending out redshirt junior Lucas Johnson, who was just granted his sixth year of eligibility. Johnson has not thrown a college pass yet as he backed up Marshall in 2017 and missed all of last year with a foot injury. It will be interesting to see what he can do in this new look Jackets passing attack this season.

Running back shouldn’t be an issue for Georgia Tech with two young options in the backfield alongside Johnson.  Jordan Mason was the lead back last season as a redshirt freshman and averaged over six yards per carry while tallying seven scores on the ground. Jerry Howard should be another solid option as he enters his junior season after he split touches with Mason last year. However, Mason outperformed Howard statistically and should get the lion’s share of the carries.

There may be no more interesting offense to watch this season than the Georgia Tech offense. Who knows what we’re going to see from this group in the first season removed from Paul Johnson?

For all of the questions on the offensive side of the ball for Georgia Tech, there are almost as many defensively. The senior-clad unit from last year wasn’t great to begin with, but now the Jackets will be throwing a lot of inexperienced players into the fire. Collins is a former defensive coordinator and will be heavily involved with the group along with defensive coordinator Andrew Thacker, who also comes over from Temple.

The defensive line will be the most heavily depleted unit on this side of the ball. All three starters last year were seniors. Most notably, the Yellow Jackets lose defensive end Anree Saint-Amour, who easily led the team in sacks (4.0) and tackles for loss (12.0). It’s tough to find anyone on the roster with significant game experience to fill in along the line. Without a force along the defensive front, this defense may have even more struggles this year.

The linebacking corps loses two of its top contributors last season in Jalen Johnson and Brant Mitchell. Both ended the season in the top three on the team in tackles, sacks, and tackles for loss. However, two starters return, giving hope to the middle of the defense. Charlie Thomas had a solid season at outside linebacker and broke out as a freshman. He finished fifth on the team in tackles and recorded his only sack of the season in Blacksburg. On the inside, senior David Curry should step into the role Mitchell left. They started together in the middle of the field last year, but now Curry can step up as the leader of the unit.

Like the linebackers, the secondary returns two promising players despite crucial losses. Tre Swilling was given valuable playing time as a redshirt freshman, starting eleven games at cornerback. He led the team in pass break-ups with six. The Jackets also return strong safety Tariq Carpenter, who started every game in 2018. He showed his ability as a box safety, finishing fourth on the team in tackles (55). However, he also can play deep and defend the pass as he finished with two interceptions and seven passes defended.

Overall, this unit is going to be largely inexperienced this season. Collins will have some good young pieces to build around, but he may struggle to game plan with almost no pass rush or run stopping ability along the line.

Why This Game is Important

Georgia Tech: At this point this year, the Yellow Jackets should settle into the new season and at least be somewhat comfortable. A win over a top team in the conference could go a long way towards Collins’ first season being successful. They play at Clemson, Miami, and Virginia earlier in the season. This could be their best chance for a big win in his first season.

Virginia Tech: The Hokies’ schedule on the road looks like this: Boston College, Miami, Notre Dame, Virginia, and this game. No game on the road is going to be easy, but out of the five, this seems like the most winnable. The Hokies have to win this one away from Blacksburg to contend in the Coastal.