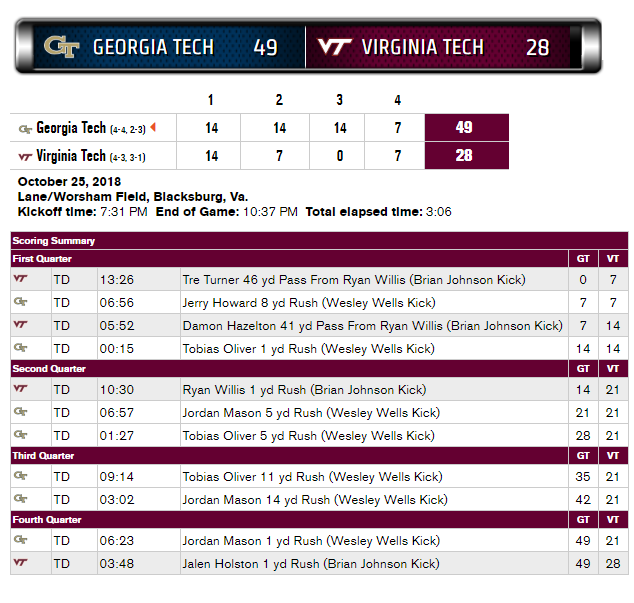 Typically, it’s not ideal for an offense to be one-dimensional. That is, unless you’re Georgia Tech. The Yellow Jackets (4-4, 2-3 ACC) utilized a punishing running attack out of the spread option to whip Virginia Tech (4-3, 3-1 ACC) 49-28 in front of a sold out Thursday night crowd at Lane Stadium. 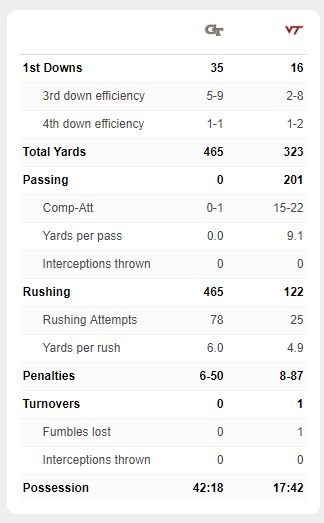 Georgia Tech broke open a 21-all tie with a late second-quarter touchdown and scored on their first possession of the second half to go up by two scores, 35-21. Virginia Tech didn’t score again until the Yellow Jackets had run the score up to 49-21. Georgia Tech carried the ball 78 times for 465 yards and did not complete a pass in the game, throwing just one all night.

“They manhandled us tonight when it’s all said and done,” defensive coordinator Bud Foster said.

The Hokies’ offense only had the ball for 17:42 while Georgia Tech and its methodical offense wore down Virginia Tech with over 42 minutes in possession.

“I feel like I blinked, and the game was over,” Virginia Tech quarterback Ryan Willis said.

Georgia Tech backup quarterback Tobias Oliver was handed the reins of the offense, getting the start after TaQuon Marshall was sidelined but available to play with an upper body injury. The redshirt freshman carved up the Hokies to the tune of 40 carries for 215 yards and 3 touchdowns, likely earning himself the long-term starting role in the process.

Paul Johnson and Co. relied on the quarterback sweep for much of the night. Georgia Tech overloaded its blockers to one side and cleared a lane time after time for Oliver and his 6-foot-2-inch, 182-pound frame.

“The bottom line is they did a really good job of outnumbering us,” Foster said. “That first half they were running a quarterback sweep and loading up our alley and blocking anything that was in that area with free hitters.”

“It’s surprising after the first couple plays, but once you see it after the fifth time, it’s just something you have to buckle down,” safety Reggie Floyd said. “You have to stop it.”

Given twelve days to prepare, Foster’s unit had no answers for the Georgia Tech option attack the entire night. Here’s a list of some notable and historically horrendous numbers from Thursday night.

“I thought they dominated the line of scrimmage, which that doesn’t happen against us and hasn’t happened very often in my career here,” Foster said. “A lot of arm tackles. You can’t arm tackle these guys, they’ll run through those. That’s the bottom line.”

Ahead 21-14, the Hokies were set to take over for the first time with the lead, but Sean Savoy muffed a punt inside the 10-yard line and Georgia Tech recovered.

“It [muffed punt] certainly was a big play, no question,” head coach Justin Fuente said. “I don’t think it’s the only play. If the offense wants to grow, then they have to keep us in games that are like this.”

The offense bogged down soon after, and Georgia Tech ripped off 35 straight points. Virginia Tech went through a stretch of 36 minutes and 42 seconds of game action without scoring. Willis finished 15-of-22 for 201 yards, two touchdowns, and no interceptions.

“I don’t know that I’ve ever seen a situation where a team executed at such a high level for three series and then shut the valve off execution wise,” Fuente said. “If you go back drive by drive and look at the plays in a game like that, the margin for error is very, very small.

The Yellow Jackets became the first team since Miami (1967, 1982, and 1992) to beat the Hokies in three straight games in Lane Stadium. It was also Virginia Tech’s first loss to Georgia Tech in Thursday night games, and Fuente is now 0-3 against the Yellow Jackets.

With the loss, Virginia Tech now sits at 3-1 in conference play, tied atop the ACC Coastal with Virginia. In one week’s time, the talking points have shifted from if the Hokies will reach the ACC Championship to if they’ll win two more games to become bowl eligible. Virginia Tech finishes the season against Boston College, Pittsburgh, Miami, and Virginia. All but Pittsburgh are home games.

“The good thing is we as a team have been through those things now,” Fuente said. “We’ve been through hard times and lost a heavily-favored football game. We’ve won big games on the road. We’ve stopped a team on the 2-yard line and drove 98 yards in six and half minutes to win the game. There’s some positives to draw back on, and I think it’s important as a coach to draw back on those things regardless of the outcome.”

Khalil Ladler was disqualified for a targeting call in the third quarter after a booth review. He will be ineligible for the first half against Boston College.

X-rays were negative for linebacker Dylan Rivers. He exited the game during the first series with an ankle injury. 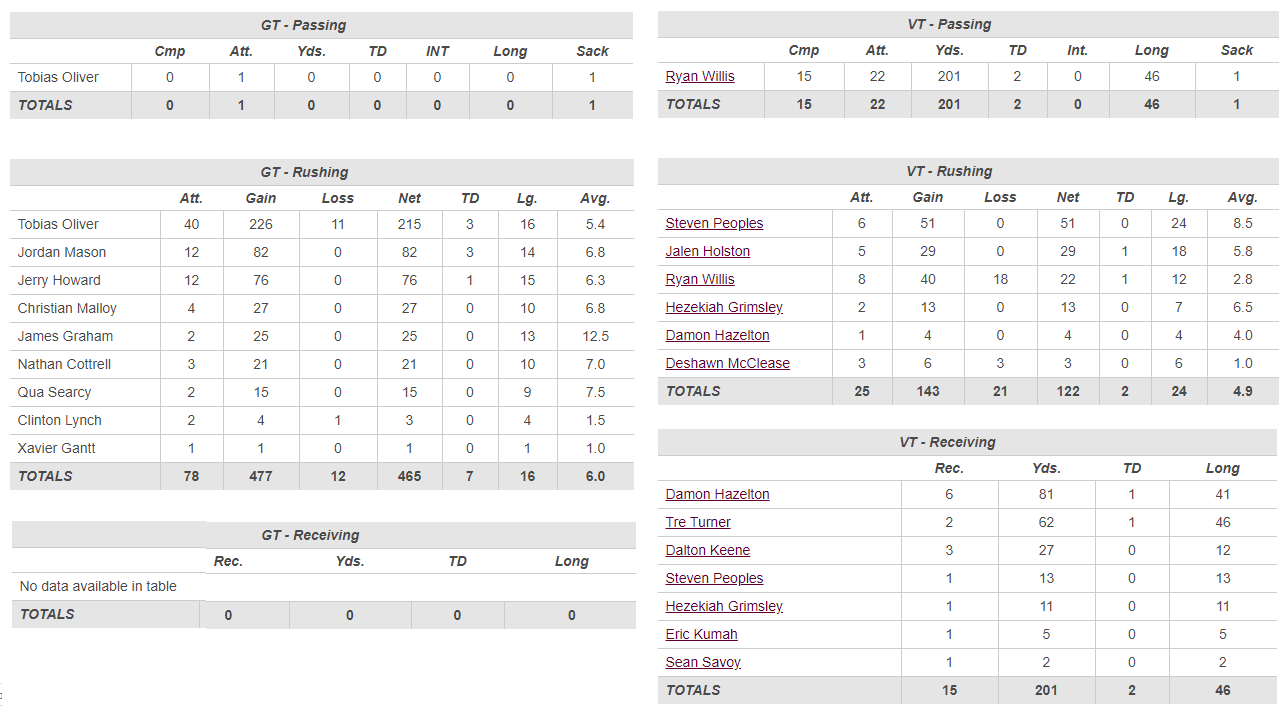