The Hokies exorcised their Chestnut Hill demons on Tuesday night by blowing out Boston College 71-56.  Virginia Tech improved to 15-13 overall and 7-8 in ACC play with the win, while the Eagles dropped to 7-21 overall, and 0-15 in league play.

Before Tuesday night’s game, Virginia Tech’s record at Boston College looked like this… 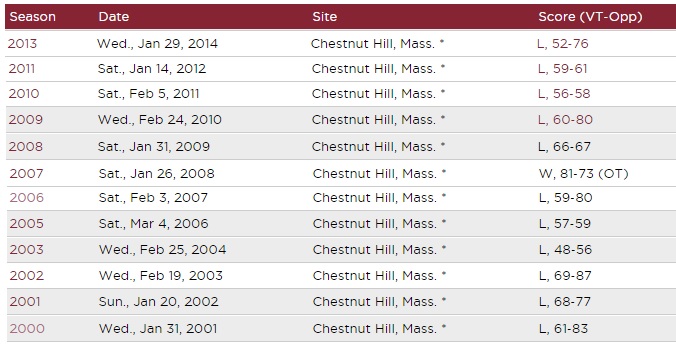 However, they had never run into a Boston College team this bad in previous seasons.  Though the Hokies didn’t play particularly well, they still took control of the game late in the first half and handed the Eagles their 14th double digit loss in 15 conference games.

At the 7:21 mark of the first half, Virginia Tech led just 19-18.  However, they closed the first half on a 21-9 run and took a 40-27 lead into the intermission.  Boston College was just 1-of-15 from three-point range in the first half (and just 5-of-28 for 17.9% for the game), and many of their misses were wide open.  BC had been a terrible offensive team all season coming into Tuesday’s game, and that trend continued against the Hokies.

Virginia Tech toyed with Boston College in the second half, only outscoring the Eagles 31-29 over the final 20 minutes.  That was more than enough however.  13 Hokies saw playing time, including walkons Greg Donlon and Matt Galloway in the final minutes.  Donlon even made a field goal in the final seconds.

It was a balanced scoring night for the Hokies…

Those were the only three Tech players in double figures.  Zach LeDay added nine points and five rebounds, while Justin Robinson had eight points and three assists.

Tech returns to action this Sunday at Wake Forest.  Tipoff is scheduled for 6:30pm, and the game will be televised by ESPNU as their Sunday night ACC game.

The Hokies have positioned themselves to make a run at the postseason, potentially with an NIT berth (unlikely), or perhaps even gaining a spot in the new “Vegas 16.”  We’ll have more on Tech’s postseason chances in a TSL Pass article on Wednesday.