It’s hard watching the Hokies take a beating like the last two whippings at the hands of #7 Virginia (67-49) and #10 Miami (65-49). And it’s hard slogging through a stretch like this, where they’ve lost seven out of the last eight games. But if you detach your emotions and look at the schedule, none of this is a surprise. We wanted better, but we’re getting what any reasonable fan would anticipate. 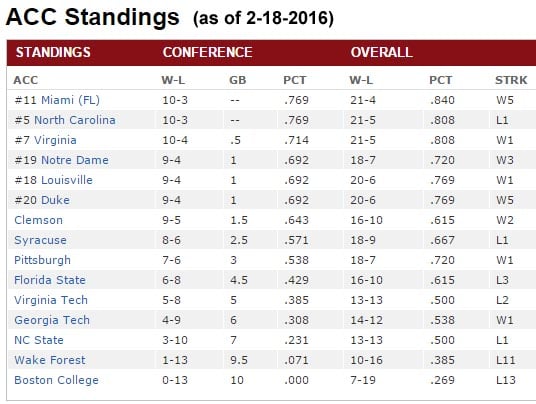 Virginia Tech has a shot at climbing to #10 right away by beating FSU this Saturday. The next two teams up the list, Pittsburgh and Syracuse, have the tie-breaker over the Hokies in head-to-head competition, so a move up higher than #10 isn’t likely.

Looking in the other direction, Georgia Tech (winners at FSU last night) is nipping at the Hokies’ heels, but VT has the tie-breaker over the Jackets.

There are 15 teams in the ACC, but since Louisville has self-imposed a postseason ban this year (insert snarky comment here), there will only be 14 teams in the ACC Tournament. That effectively makes VT the #10 seed at this point in time, which would give the Hokies a first-day bye in the tournament: 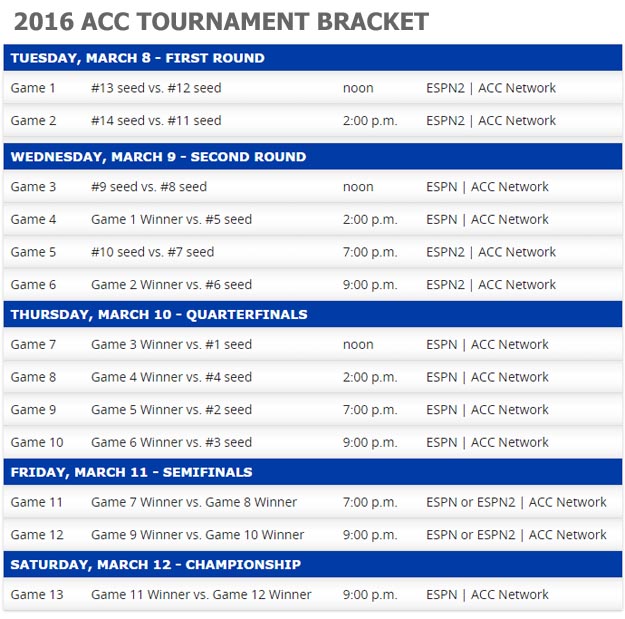 As long as VT stays ahead of Georgia Tech, the Hokies will land as either a #10 seed (playing at 7 PM the second day of the tournament against #7), or they’ll move up to #9 (and play the noon game against the #8 seed). Right now, the 7-10 seeds are a pool of Syracuse, Pittsburgh, FSU, and Virginia Tech.

This may sound odd, but I’d rather have the #10 seed, and play at night, when more fans will be there, and more people will be watching on television. That noon game is going to be very sleepy, and largely ignored.

But back to the topic: missing home sweet home.

The Hokies started out the ACC schedule a sparkling 4-1, which got people excited, but they then embarked on a brutal eight-game stretch:

Looking back, and taking off the orange and maroon glasses, the W’s and L’s are what you would expect from that portion of the schedule. The Hokies got very close to converting a couple of those L’s into W’s, but Seth Allen’s last-second shot at Notre Dame didn’t go in, and the Hokies collapsed in the last 90 seconds at Syracuse to blow a 7-point lead.

Other than that? No surprises.

At this point, coming off two bad losses and suffering through a 1-7 stretch, it’s human nature to throw in the towel and say that the Hokies could lose a lot of those remaining games. The team is tired, the opponents have figured them out, Seth Allen and Zach LeDay have gone into the tank, etc.

So ten points per game has just disappeared in the last five games, from the free throw line alone. Perhaps that’s because opponents have adjusted defensively to take away one of the Hokies’ main weapons: free throws.

So 14.5 points per game from LeDay and Allen have disappeared in the last four games. Perhaps that’s because opponents have adjusted to Allen and LeDay, especially where free throws are concerned, because LeDay and Allen are Tech’s most prolific at getting to the line, but it’s not happening anymore.

Sounds grim, doesn’t it? Opponents have adjusted, and now it comes down to pure talent, and most other ACC teams have more of it.

But Cassell Coliseum is the great equalizer.

In their first season in the ACC, the Hokies surprised everyone by going 8-8 in the league. They did it by holding serve at home, where they were 6-2, including a win over #7 Duke.

On the road, they were 2-6, but one of those was an early-season upset at #12 Georgia Tech.

Here’s how it looked, game-by-game: 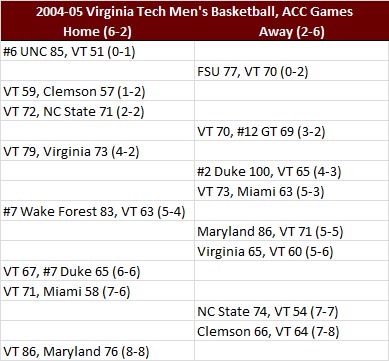 That was formulaic: At home, the Hokies won every game against comparable (non-ranked) opponents, lost two of the three games against ranked teams, and upset #7 Duke.

On the road, the Hokies lost almost every game, stealing one early from 12th-ranked Georgia Tech (who finished the season #25) and beating Miami, who finished 16-13 (7-9 ACC).

By the end of the season, the Hokies couldn’t buy one on the road, losing their last four roadies, two of them by double digits. 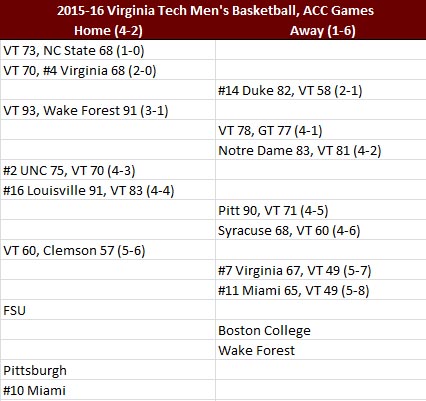 On the road, it’s a different story. Just like 2004-05, the Hokies snared an early win (also at GT), but can’t buy a road win lately, dropping five in a row now.

The key is what happens from here on out. The 2004-05 Hokies never did lose their home magic, winning their last three. Can the 2015-16 Hokies do the same? Beating Miami would be a tall order, though the 04-05 Hokies knocked off #7 Duke at home late in the season, despite the bad things that were happening on the road.

The 2004-05 season is generally regarded as a successful one, and this year is tracking no different, despite the recent horror show on the road. With a current 5-8 ACC record, finishing anywhere from 7-11 to 9-9 is within reach, maybe even 10-8 if they catch fire. (A man can dream.)

Tech has slogged through a nasty eight-game gauntlet, and they’re finally coming home. We’ll find out in the next two weeks how much they have left in the tank, and if the friendly confines of Cassell Coliseum can give them a lift.