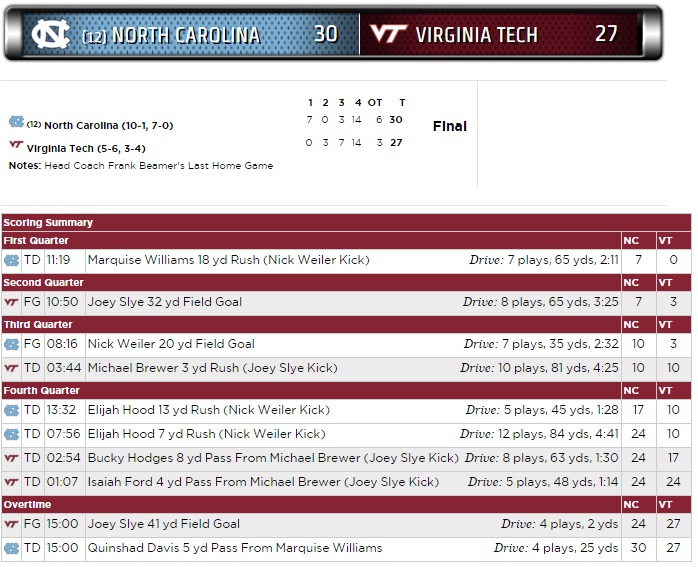 Blacksburg, VA — Virginia Tech nearly crafted a storybook ending in Frank Beamer’s last home game as the Hokies’ coach, but it wasn’t meant to be. #12 North Carolina downed Virginia Tech in overtime on a five yard touchdown pass from Marquise Williams to Quinshad Davis, and the Tar Heels prevailed, 30-27.

To win, however, UNC had to overcome 14 straight points by the Hokies to close regulation scoring. With the Heels holding a 24-10 lead and taking possession with just 5:36 left, things looked hopeless.

But Williams fumbled twice in the last 4:29 of the game, and the Hokies turned both of them into touchdowns to knot the game at 24-24 and send it into overtime.

Tech had the ball first in the extra frame and was only able to muster a 41-yard field goal by Joey Slye. The Tar Heels responded by moving quickly to the Hokies’ seven yard line, and three plays later, on third and goal from the five, Williams hit Davis for the winner.

The outcome ended what many hoped would be a picture-perfect ending for Frank Beamer, who will step down at the end of the season as Tech’s coach after 29 years. But Virginia Tech battled North Carolina closer than many observers thought they would, holding the Heels’ high-powered offense to 18 points below its season average in regulation.

Offensively, the Hokies gained 403 yards and were clutch in the fourth quarter, but they failed to capitalize on some good early field position, and the Hokies turned the ball over on three straight possessions early in the fourth, the first two leading to UNC touchdowns that broke open a 10-10 game and made it 24-10, Heels.

Michael Brewer was 20-35 for 273 yards and two touchdowns (one each to Bucky Hodges and Isaiah Ford, both in the fourth quarter), but he also threw two interceptions in the fourth quarter. Travon McMillian, who was dinged up during the game, rushed 21 times for 80 yards, and Sam Rogers added 12 carries for 55 yards.

Defensively, the Hokies were led by Chuck Clark (10 tackles) and Andrew Motuapuaka (8 tackles, 2 TFLs, 1 fumble recovery). The Hokies limited UNC’s Marquise Williams to 205 yards on 13-of-26 passing, but they gave up 240 yards rushing, including 115 yards and 2 TDs to Elijah Hood (17 carries), and 74 yards to Williams (18 carries, including five sacks for -22 yards).

The Hokies got off to a slow start in this one, opening with a  three and out and then coughing up a 7-play, 65-yard touchdown drive on UNC’s first possession. The Heels’ drive featured a 32-yard completion from Marquise Williams to Austin Proehl on 3rd and 13, and was finished off by an 18-yard run around left end for a TD by Williams.

The Heels had 70 yards of offense on that possession, due to a false start penalty, but from there, Tech’s defense clamped down, giving up just 86 yards the rest of the half and allowing the Heels to cross midfield for just three plays. In the half, North Carolina was just 2-7 on third down and had the ball for 12:21 in time of possession. UNC ran just 29 plays and picked up just six first downs in the half.

The Hokies penetrated to UNC’s 26 yard line and faced third and one, but Michael Brewer lost three yards on a designed run, and Joey Slye missed a 46-yard field goal slightly left.

On their first possession of the second quarter, Tech drove from their 20 all the way to the UNC 15 on the strength of a 44-yard Brewer completion to Isaiah Ford. But on third and four from the Heels’ 15, Brewer barely missed a touchdown pass to Cam Phillips, who laid out but couldn’t haul it in. Slye kicked a 32-yard field goal from there to make it 7-3.

On UNC’s next possession, Tech defensive tackle Corey Marshall broke through and sacked Williams, who lost the ball as Marshall threw him to the ground. The officials ruled it a fumble, recovered by VT’s Andrew Motuapuaka, and after a review, the play stood, and VT took possession on UNC’s 30 yard line.

On third and five from the 25, Brewer completed a ten yard pass to Travon McMillian, but Augie Conte was called for holding. On the ensuing play, Brewer was sacked, and the Hokies were forced into fourth and 23 from the UNC 43 yard line, and had to punt.

UNC ran just four plays on their first possession of the second half and then punted. The Hokies failed to pick up a first down and lined up to punt from their 40 yard line. The punt snap was rolled back to A.J. Hughes, who fielded it and hurried a punt that was blocked. UNC took over on the Hokies’ 38 yard line.

Three plays later, the Heels faced third and 11 from the Hokies 39, and Dadi Nicolas was called for an offsides. As umpire Ron Cherry was relaying the call on his microphone, Nicolas walked by him, and — apparently accidentally, as Nicolas was shouting and waving his arms — hit Cherry on the arm. Cherry whistled Nicolas for unsportsmanlike conduct, and UNC was given a first down at Tech’s 20 yard line.

On the very next play, Marquise Williams nearly scored on a run around the end, but was called out at the one yard line. Faced with a  near-certain score, the Hokies’ defense stiffened, stuffing two straight runs and knocking down a third down pass from the three yard line to force a short field goal. UNC kicker Nick Weiler hit the 20-yard field goal, and the Heels led 10-3, but the Hokies had avoided a small disaster.

Tech responded with their best drive of the game, marching 81 yards in ten plays to tie it up on a three-yard keeper up the middle by Brewer on third and goal from the UNC three. With 3:44 left in the third, it was 10-10, and at that point, VT’s 88th-ranked offense was outgaining UNC’s 19th ranked offense, 220-186.

The Hokies forced another three and out on UNC’s ensuing possession, and Tech took over on their 31 after a punt and started moving again. But on the last play of the third quarter, Sam Rogers cut back on a run up the middle and was stripped by Nazair Jones, who also fell on it, and the Heels were in business on the Tech 45-yard line.

It only took the Tar Heels five plays to score from there. Williams completed a pass to Quinshad Davis for 21 yards on third and nine, and then Elijah Hood ran it right up the middle on the next play for a 13-yard TD to make it 17-10, Heels, with 13:32 remaining.

Three plays later the Hokies turned it over yet again, when Michael Brewer unleashed a bomb down the right sideline to Bucky Hodges. In the ensuing battle for the ball. Hodges tipped it into the air, and UNC’s Des Lawrence picked it off at the Hokies UNC 16.

UNC marched effortlessly downfield from there, going 84 yards in 12 plays and scoring on another Elijah Hood run right up the middle, this one from seven yards out. With 7:56, the Heels had taken control of the game, 24-10.

Virginia Tech put together a nice drive on the following possession, moving from the Hokie 25 yard line to UNC’s 29 in seven plays, where they had a first and ten. But for the third straight possession, the Hokies turned it over when Brewer threw a sideline pattern to Isaiah Ford, but M.J. Stewart slipped in front of Ford and intercepted the ball at the UNC 16.

UNC quickly moved to the Hokies’ 35 yard line, but Tech caught a break when Marquise Williams fumbled on a hit by Vinny Mihota, and Woody Baron recovered it at the VT 37 with 4:24 left. First Brewer hit Sam Rogers for 25 yards, then he later hit Isaiah Ford for 26 yards, down to the UNC 11 yard line.

On fourth and seven from the eight yard line, Brewer dropped back and calmly hit Bucky Hodges cutting across the back of the end zone, to  make it 24-17 with 2:54 left. The TD was the sixth of the season for Hodges, and the 13th of his career, and it capped an 8-play, 63-yard drive.

Improbably, Williams fumbled again on UNC’s following possession, coughing it up when Luther Maddy tackled Williams after a run to the middle. Anthony Shegog scooped it up, and the Hokies were in business at the UNC 48 with 2:21 to go.

On the very next play, Brewer uncorked a 36-yard pass to Isaiah Ford down the right sideline, and Ford reeled it in at the UNC 12. With two timeouts and plenty of time, the Hokies took their time, running Sam Rogers twice for eight yards, down to the four yard line. On third and two from there, Brewer threw a corner route to Isaiah Ford, who almost hauled it in, but UNC’s Des Lawrence knocked it free.

Facing fourth and two from the UNC four, with 1:12 left, Brewer dropped back and fired a TD pass in the middle of the field to the sliding Isaiah Ford, and with 1:07 left, the Hokies had tied it up.

The Hokies forced a punt by UNC, and then took a knee to bring on overtime.

UNC won the overtime toss, so the Hokies were on offense first. After a couple runs by McMillian netted just two yards, Brewer threw an incompletion to Sam Rogers on third down, and Slye punched in a 41-yard field goal.

UNC wasted no time in their possession, moving to the Hokies’ 7 yard line on a pass to Ryan Switzer. Two runs and a false start put the Heels at Tech’s five yard line, where it was third and goal. After a timeout, Williams threw a pass to the corner of the end zone to Quinshad Davis, who reeled it in as he as being shoved out of bounds. The referee signaled a touchdown.

The UNC players and coaches stormed onto the field, but the referees decided to take one more look at the play. After a short review, the play was ruled a touchdown, and the Heels were 30-27 winners.