East Carolina has had a nice run in recent years.

Here’s how they’ve fared against ACC teams in that span; overall, the Pirates have won their last four games against ACC competition.

ECU and their fans always get up for ACC opponents. Remember that Virginia Tech and East Carolina were once on the same level. The Hokies escaped to the Big East and later the ACC, while the Pirates were left out of conference realignment. They treat ACC opponents exactly as Virginia Tech did before the Hokies joined the league.

Past games mean nothing, of course. Both teams have different personnel this year. The Pirates lost most of the key players that were responsible for beating the Hokies last season, whereas Tech brings back nearly everybody.

Here’s OXVT’s Tale of the Tape… 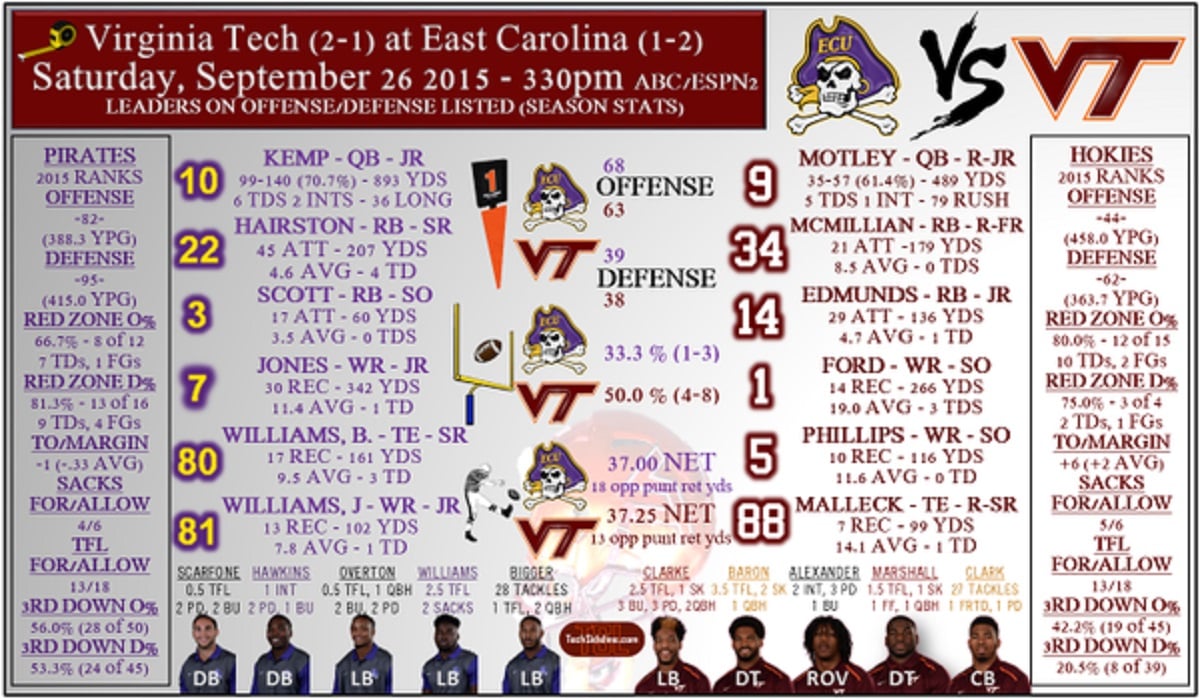 Also, for those wondering, here’s how the TV coverage breaks down.  The game will be shown on ABC in the blue area, and those of you in the yellow area can watch it on ESPN2. 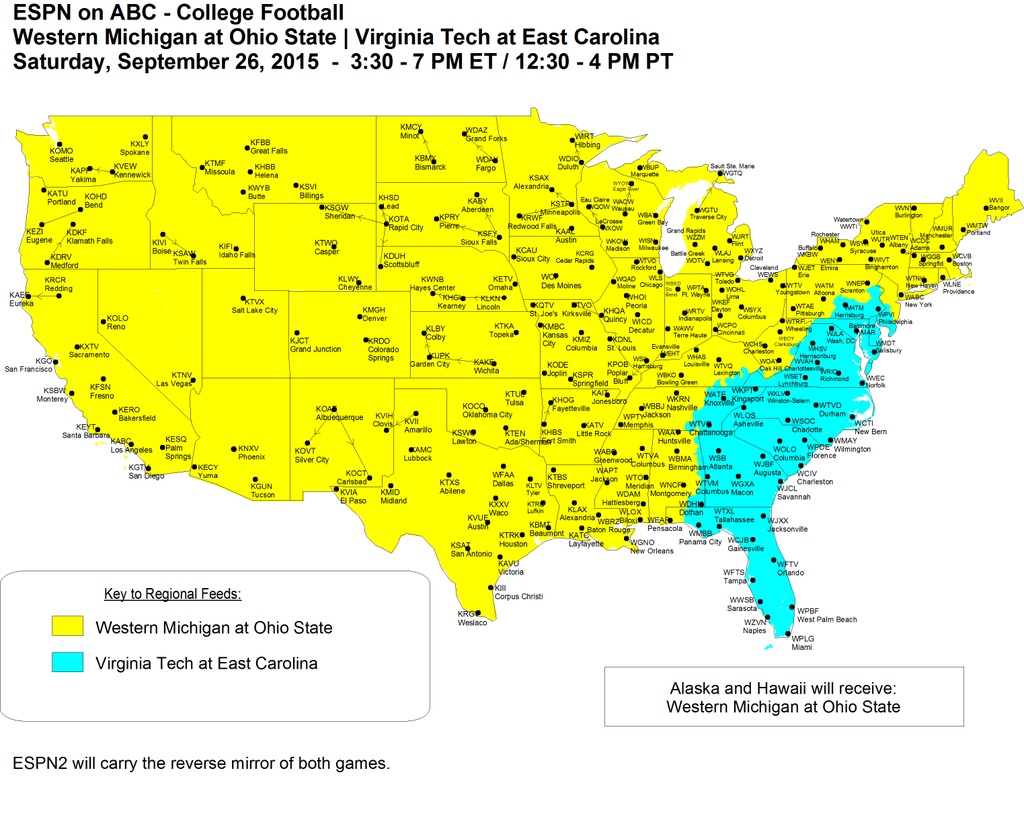 Let’s take a look at the ECU offense and defense.

I don’t think there’s much I can tell you about ECU’s offensive system that you don’t already know. The Pirates like to spread the field and throw the ball around. That’s what they’ve been doing for awhile, and this year is no different.

Of course, personnel always dictates how good a football team can be, and the ECU offense lost some of their key cogs from last season. Here’s a look at their starting lineup.

With the exception of right tackle Brandon Smith, the Pirates have a very experienced offensive line. Success on offense always starts up front, and this unit has been a big part of ECU’s offensive success over the last few years. Even though they have been primarily a passing team in that time span, they have also been able to run the ball effectively. That balance helped make them a very dangerous offense.

This year has been different. Despite the experience of the offensive line, the Pirates are averaging just 86.3 yards per game on the ground and 3.4 yards per carry. ECU doesn’t have to rush for a ton of yards to be effective, but they need to do better than 3.4 yards per carry. Here’s how it breaks down per game…

The Pirates are probably better than their performance against Florida shows, but their performance against Navy didn’t exactly stand out either. Running back Chris Hairston ran for 528 yards and averaged 6.7 yards per carry last year, but his average has dropped to 4.6 yards per carry this season. ECU has to improve their running game to support a passing game that is now without Shane Carden, Justin Hardy and Cam Worthy. Hardy holds the ECU record for most career receptions, and he currently plays for the Atlanta Falcons. Worthy had 6 catches for 224 yards against the Hokies a year ago.

Shane Carden’s replacement was supposed to be Kurt Benkert, but he is out for the season with a torn ACL. Instead, JUCO transfer Blake Kemp has been the signal caller. His numbers have been solid so far: 99-of-140 (70.7%) for 893 yards, 6 touchdowns and 2 interceptions. He’s averaging nearly 300 yards per game, and he’s done a good job of not throwing interceptions. Kemp has taken some criticism, but from what I can tell, ECU’s issues this season have not been at the quarterback position.

Isaiah Jones has taken over as ECU’s top receiver. He is currently #3 in career receptions with 173. For the season, he has 30 catches for 342 yards and a touchdown. Against a good Florida defense he had 14 receptions for 135 yards and a touchdown. Jones generally lines up on the inside, so Saturday’s game could be a big challenge for Greg Stroman and Virginia Tech’s safeties.

The Pirates don’t have the overall talent at receiver that they possessed in the past. Davon Grayson played high school football with VT free safety Chuck Clark, and they are still best friends. Grayson has seven catches on the season, while Jimmy Williams has 13. ECU has gotten tight end Bryce Williams involved more this year. He has 17 catches for 161 yards already, and he’s also scored three touchdowns.

It will be interesting to see how Virginia Tech plays ECU defensively. Last year the Pirates had success throwing jump balls to Cam Worthy. This year Worthy is gone, as is Justin Hardy, not to mention the quarterback who threw all those passes. I don’t think they can trust their wide receivers to out-athlete Tech’s defensive backs two years in a row.

Ultimately the Hokies need to make ECU’s running game continue to be a non-factor. If they can do that, I can’t see this year’s version of the Pirate offense scoring enough points to beat Tech. I think Tech’s defense will win the battle. They won the battle last year more times than not, as Shane Carden completed less than 50% of his passes. However, when he did complete one, it generally went for a big play. In the 2013 meeting, he threw for only 158 yards.

I’m not expecting the Hokies to hold ECU to 158 yards passing again, but I do expect them to stop an offense that has been struggling so far this year.

The Pirates run a 3-4 defensive, and fortunately Terry Williams is gone. Williams was the ECU nose tackle who wrecked the interior of the VT offensive line over the past two years. Without him, the Pirates have struggled to stop the run this season.

Tech won’t put up 415 rushing yards like Navy did, but averaging somewhere close to five yards per carry would be an achievable goal. If they can do that, they’ll gain a big advantage.

Here’s a look at the Pirate defense…

The Pirates have four very experienced players in the front seven, so it’s a little bit surprising that their rushing defense hasn’t been better. Giving up so many yards to Navy is understandable, because it takes a great effort from the entire defense to stop an offense like that. I would not be surprised to see the ECU front seven play their best game of the young season against the Hokies.

When you’re watching the game, pay attention to the interior line play. Demitri McGill and backup Demage Bailey (6-5, 316, So., 1 career start) are a downgrade from Terry Williams. Obviously Wyatt Teller and Eric Gallo are a major upgrade from the VT interior line that Williams annihilated over the last two seasons. If you see the Hokies getting consistent push against the nose tackle early in the game, that’s a great sign. That will free up guys like Teller and Augie Conte to block linebackers, and I’ve yet to see an inside linebacker who can get off a Teller block.

I believe the Hokies have the advantage in the secondary. Josh Hawkins is a First Team All-AAC player, but the other defensive backs are very inexperienced. Though Rocco Scarfone has a great name, I don’t believe he can consistently defend Virginia Tech’s receivers. Tech’s tight ends also have a chance to have a nice game against a pair of inexperienced safeties and two inexperienced linebackers.

From a speed perspective, the East Carolina defense will provide a much greater challenge than Purdue. However, they don’t possess the same type of physical strength right up the middle as the Boilermakers. While we saw the Hokies gain a lot of yards on the outside last week, they were basically shut down up the middle. This week Tech should hold a major advantage on the inside.

Stats don’t mean as much early in the season because we have only a very small sample size, but it’s still worth comparing advanced stats.

First, let’s start with the offense

The advanced stats tell us that Virginia Tech’s offense has been much more efficient than ECU’s. What about defense?

Though Tech doesn’t rank well in rushing defense or explosive plays (thanks mostly to Ohio State), they still own an overall defensive efficiency rating of #41, which outclasses ECU’s rating of #83. Yes, the Virginia Tech offense has been more efficient than the Virginia Tech defense through the first three games of the season. Who would have thought that before the season began?

From an advanced stats perspective, the game breaks down like this…

On paper, Virginia Tech has a major advantage in this game.

Sometimes stats tell the whole story, and sometimes they don’t. I don’t think ECU is quite as bad as the Navy game suggested. Obviously they will be mentally ready to face an ACC foe, and the crowd will be ready to rock and roll for a 3:30 ABC/ESPN2 kickoff. The Pirates don’t get a chance to play on national television very often, and the 3:30 kickoff time will give the fans some extra time to tailgate.

I have a lot of respect for East Carolina for a few of reasons. First, they’ve been a very consistent program for as long as I can remember. In many years they are better than half of the ACC teams we face, so playing them gets us ready for conference play. Second, their fans are extremely loyal. Third, and perhaps most importantly, Virginia Tech and East Carolina used to be pretty much the same program. There wasn’t much, if any, difference between the two. Part of me feels bad for them that they got left out.

All that aside, I feel better about this ECU matchup than I have in a few years. They don’t appear to be as good as they usually are, and for the first time in awhile, our offensive line has the advantage over their defensive line. I feel like Tech will win this game fairly comfortably.

Will Stewart’s Take: That’s a great preview by Chris. Lots of research, lots of stats, and good analysis of the matchups.

Now … forget about it. Throw it out the window.

This is all about effort and intensity. The Hokies need to just go down to Greenville and smack ECU in the mouth, and keep smacking them until 60 minutes of football have passed. Then get on the bus and come home, W in hand.

In 2000, the Michael Vick-led #10 Hokies went down to a rowdy Dowdy-Ficklen Stadium for a big Thursday night clash. The ECU faithful were foaming at the mouth, ready to make a big-time statement … and the Hokies Beamerballed ECU to death in the first half, riding special teams and defense to a 31-0 half time lead. It ended up 45-28, Hokies, but it was never in doubt.

Last year, I boldly predicted the Hokies would have more offensive success than that, and I picked VT to win 34-17. Not so much, as ECU rolled to a 28-21 win that I’m sure none of you have forgotten.

I’d like to think that Tech will play a good, intense football game Saturday. I have no way of knowing for sure at this point, though. But much like last year, I’m leaning on the optimistic side of the equation.

Who will win the Virginia Tech-East Carolina game?