When I opened up email this morning, this was one of the emails that was greeting me… 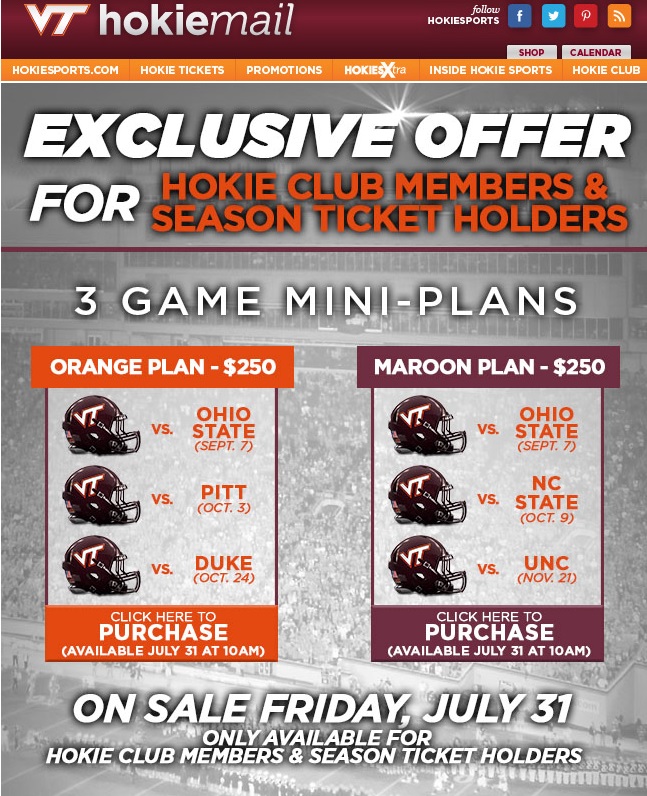 For $250, you can by one of two 3-game plans for 2015 season. Both plans include the Ohio State game. The Orange Plan packages Ohio State with Pitt and Duke, while the Maroon Plan packages the Buckeyes with NC State and UNC. Personally, I think the Maroon Plan sounds like a pretty good deal. Those are the three most desirable games in Lane Stadium this year.  These two plans will be available for purchase on Friday, July 31 at 10am.

Right now, these two packages are only on sale to Hokie Club members and season ticket holders. They are not available to the general public at this time. That’s a good move, I think. It’s always correct to give your most loyal fans the opportunity to buy tickets first. I’ll probably buy that Maroon Plan just to get my hands on a couple of extra Ohio State tickets.

So how are regular season ticket sales going? We can get a general view by playing around with the ticket purchasing method on HokieTickets.com. First, let’s look at a diagram of Lane Stadium for reference. Remember, the top row in the East Stands is Row 5Q. 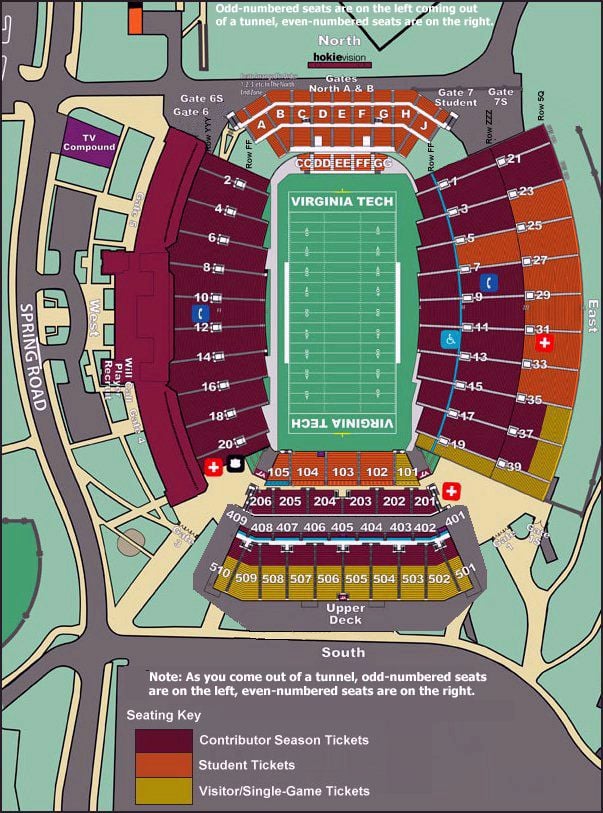 Tickets are still available in sections 29, 31, 33, 35 and 37 in the East Stands. They are also available in all top sections of the South Endzone, with the exception of Section 510.

In the East Stands, all tickets in the midfield sections are nearly gone, but we’ve got some work to do as we head towards the southeast corner of the stadium.

In the upper sections of the South Endzone, things are pretty ugly. You can purchase tickets as low as Row D in at least one of the sections.

At this point it is obvious the stadium will not sell out by traditional season ticket sales, even with the #1 team in the country on the schedule. The Ohio State game will eventually sell out, though we don’t know whether or not they’ll have to release tickets to the general public in order to get that result. Here are the remaining steps:

Hopefully we can get a sellout before step #3 becomes necessary, but I have my doubts at this point. If #3 happens, we can expect to see a ton of Ohio State fans in Lane Stadium.

Renovations of Virginia Tech’s indoor club seats will be completed in time for the Ohio State game at a cost of over $400,000 according to this article on HokieSports.com.

In other words, the club sections are going to look better while also offering more services.

What does “Enhanced beverage options” mean? It means Virginia Tech is going to be selling beer and wine in the indoor club sections. Alcohol has always been available in suites, but never in the club area. That will change this season. According to Mike Barber of the Richmond Times-Dispatch, Tech will have national brands and at least one kind of Virginia beer available for purchase.

Cost of Attendance is adding nearly $1 million a year to the budget of the athletic department, and limited alcohol sales is one way to help make up for the increased cost of doing business in college athletics.

There’s a rumor swirling around the Ohio State message boards that several key Buckeyes will be suspended for the season opener at Virginia Tech. I’ll save you the trouble of scrolling through that long thread by telling you the names of the players who are rumored to be suspended…

DE Joey Bosa (6-6, 275, Jr.): Bosa is a starter at defensive end for Ohio State. With 21 TFL and 13.5 sacks he was a unanimous All-American in 2014. He is projected as a top 5 pick in next year’s NFL Draft, and he is the Preseason Big Ten Defensive Player of the Year. He would be a huge loss for the Ohio State defense.

H-back Jalin Marshall (5-11, 205, So.): As a true freshman last year, Marshall was the second leading receiver on the team with 38 receptions for 499 yards and six touchdowns. He failed to catch a pass in only one game a year ago – Virginia Tech. He also had 25 carries for 145 yards and a touchdown.

Marshall, Wilson and Smith were three of Ohio State’s top six receivers a year ago. Devin Smith, a senior last year, was also in that top six. That means just two of Ohio State’s top six receivers will suit up against the Hokies, if the rumors are true. It would also partly help explain why quarterback Braxton Miller recently said that he’ll play WR/H-back this coming season.

Again, we don’t know if the rumors are true, partly true, or completely false. However, they are making their way across the Ohio State boards as well as Twitter. Here are a couple of other links discussing this…

That second link is from July 9, so the rumors have been floating around for quite awhile. It will likely be a few weeks before we know whether or not they are true.