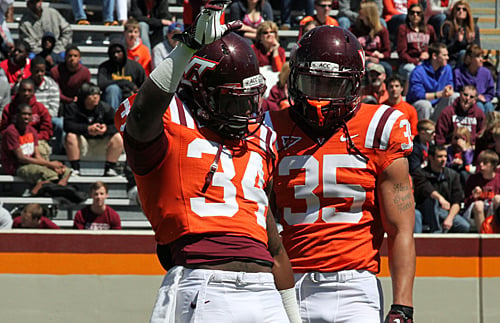 Kyshoen Jarrett and Laurence Gibson were teammates at Virginia Tech.  They’ll now be arch enemies in the NFL.

Jarrett, a strong safety prospect, was selected in the sixth round with the #181 overall pick by the Washington Redskins.  He hopes to compete for playing time on a defense that is in major need of an upgrade, particularly in the secondary.

Meanwhile, offensive tackle Laurence Gibson was taken in the seventh round with the #243 overall pick by the Dallas Cowbows, the division rivals of the Redskins.  The Cowboys have one of the best offensive lines in the NFL, so he’ll hope to compete for a spot in the two-deep this season.

Virginia Tech has had at least one player selected in every NFL Draft since 1994.

Best of luck to both Jarrett and Gibson in their NFL careers.