The Virginia Tech Athletics Department announced Wednesday some prices for individual game tickets this upcoming season, along with a series of promotions designed to enhance the fan experience at Lane Stadium.

The prices for individual game tickets, should they become available, are as follows: Furman ($45) and all conference games ($60), which include games against Pittsburgh, NC State, Duke and North Carolina. 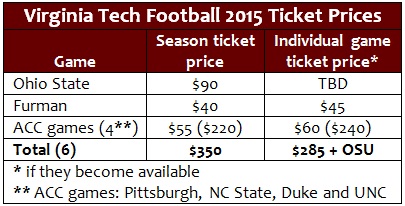 Individual game pricing has not yet been determined for the Ohio State game. The only way for Tech fans to currently guarantee a seat to see the defending national champions on Sept. 7 at Lane Stadium is to purchase season tickets. There is no guarantee that individual game tickets will be available for sale. Contractually, the athletics department must also provide 4,000 tickets to Ohio State and will be charging OSU $110 per ticket, consistent with their pricing for Tech’s 2014 game in Columbus.

Season ticket holders also will have exclusive access to a personal season ticket service executive, the option to purchase single-game tickets prior to the general public (including extra OSU individual game tickets if available), the opportunity to attend exclusive events/practices and more.

Tech has designated the Ohio State game on Labor Day as its “Orange Effect” game. Also, the athletics department announced that the Furman game on Sept. 12 will be the “White Effect” game along with Military Appreciation Day. Tech will recognize the 2015 inductees into the Virginia Tech Sports Hall of Fame at halftime of this game as well.

The Duke game on Oct. 24 will be the “Maroon Effect” game and also will serve as Homecoming. The official t-shirts of all these games will be available for purchase beginning at the Maroon-Orange Spring Game on April 25 and at the University Bookstore thereafter.

New this upcoming season will be the department’s “Twenty4You” campaign. Twenty-four fan experience initiatives center on improving the gameday experience for all fans will be announced in August. The department conducted a survey of select fans after every home game during the 2014 season, asking an array of questions, including ones related to parking, concessions, in-game entertainment and others. Those results were analyzed, and the 24 initiatives will be implemented to create the greatest gameday atmosphere possible.

The athletics department wants to remind people to attend the annual Maroon-Orange Spring Game on Saturday, April 25, at 2 p.m. Admission is free, and fans can pick up a 2015 football poster. Also, Hokie Village, the pregame festival that debuted last fall, will be opening at 10:30 that morning and closing at 1:15 p.m.