At half time of Thursday night’s game against Duke in Cassell Coliseum, Allstate presented a check to Virginia Tech Director of Athletics Whit Babcock for $130,000. The presentation was the culmination of an Allstate-sponsored Twitter challenge that started last August and ran for 15 weeks. Spurred by Hokie fans on Twitter, the contest resulted in the big payday for VT athletic scholarships.

Allstate’s Twitter challenge was simple: All fans had to do was tweet the hashtag #ItsGood2Be, along with a second hashtag specific to their school (in Virginia Tech’s case, #Hokies), and it would tally a vote in Allstate’s contest.

Each week, starting at midnight on Sunday night, Allstate would count the tweets each school received, and award $10,000 to the winning school, for athletic scholarships.

The voting totals would reset to zero each Sunday night at midnight, and the contest would start again. Fans could keep track of the contest in real time by visiting a web site (now removed) that Allstate set up, which would display a leaderboard like this screen capture: 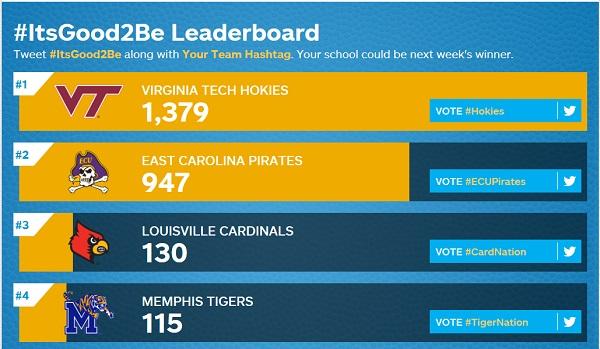 Only one other school won any money: Louisville. The Cardinals, using the hashtag #ItsGood2Be combined with #CardNation, won Weeks 5 and 8. Virginia Tech won every other week.

How did a school like Virginia Tech, with a fan base best described as “medium-sized” in major college athletics, win 13 out of 15 weeks in a contest open to every school in the country? Therein lies a tale.

On August 25th, the day the contest started, I received an email from a PR representative that advised me how the contest worked. It sounded interesting and painless, and I noticed one rule in particular: retweets counted, too. If we used the hashtags in a TSL tweet and got people to retweet it, every retweet would count as a point.

TSL had a decent-sized Twitter following at the time (about 8,000 followers), so I thought, let’s give this a shot.

The next day, I started tweeting out on TSL’s account … read from the bottom up in the following screen capture: 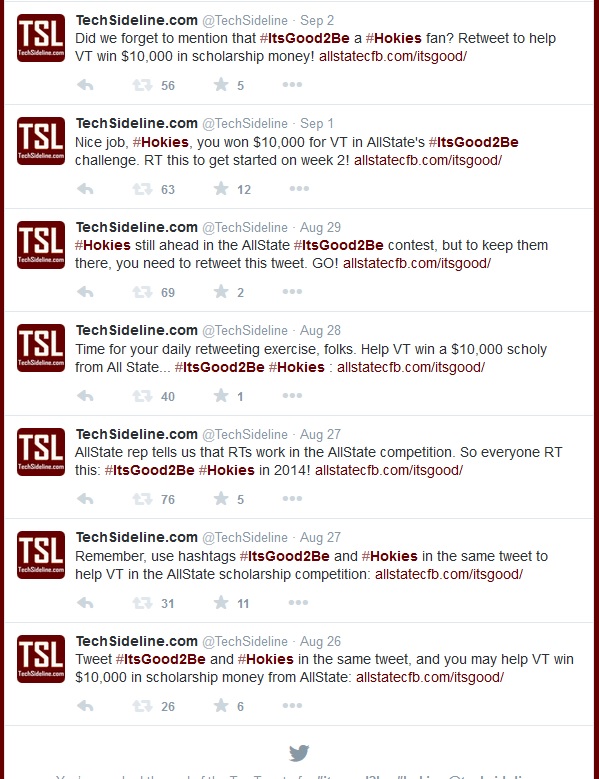 So we kept it up on TSL’s Twitter feed and message boards. In Week 2, Ohio Bobcats fans raised a challenge (not Ohio State … Ohio). I logged onto the Allstate site that Sunday night around 9 PM to check voting, and Ohio was ahead by about 100 votes, with vote totals of about 950 to 850. I rallied the troops on the message boards and Twitter, and this tweet alone (at 9:17 that night) accumulated 90 retweets and helped the Hokies pull ahead:

#Hokies fans, retweet this! #ItsGood2Be #Hokies when you beat OSU at the 'Shoe!! (Scoring closes at midnight tonight) http://t.co/ZslD3qrkbq

By midnight, VT had shot ahead and won by a few hundred votes, with a total of 1,399 votes.

In Week 3, a Pitt fan who was tweeting over and over and over put up a bit of a fight all by himself, but VT won again, this time with 1,539 votes. The Pitt fan topped out at about 900 votes or so. 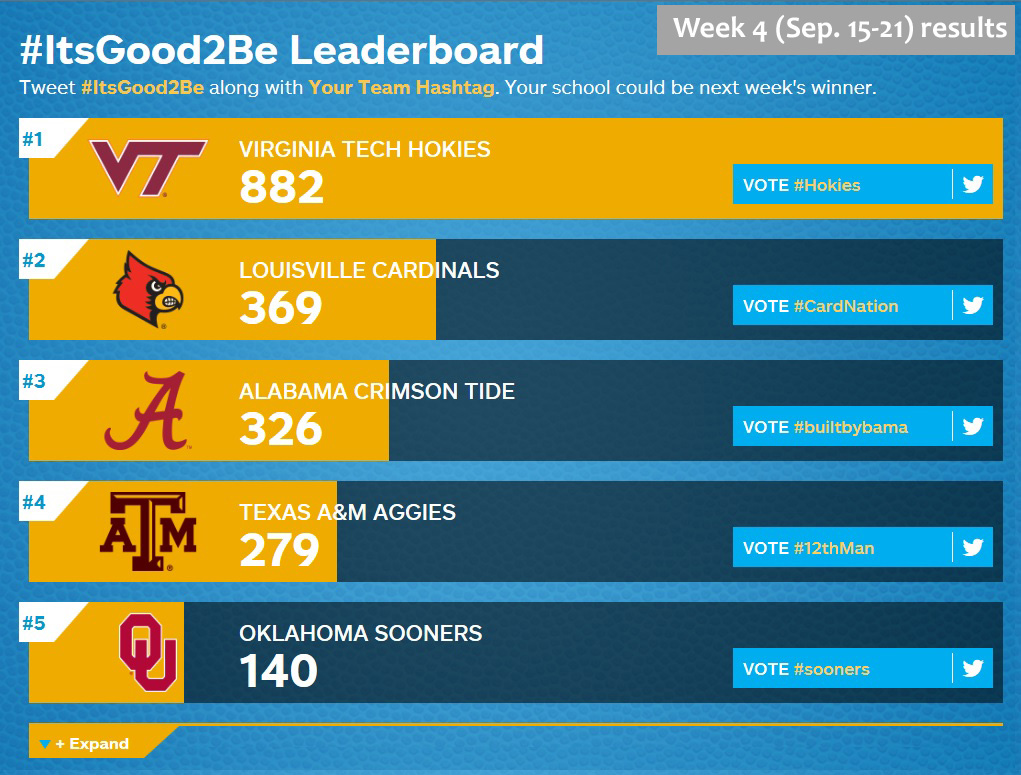 Then came Week 5 … and Louisville decided to get into the act.

This was the week where I thought the fun was over. VT led handily during the week, and then Louisville’s official football and athletics Twitter feeds decided to get into the act on Saturday and Sunday, and they pulled ahead to win as the weekend closed.

Here’s an example of what Louisville did that week … note the 1,151 retweets from this one tweet alone.

I realized how serious the Louisville threat was when I logged on Sunday night, September 28th, and saw this leaderboard:

Crank it up #Hokies fans, in the AllState #ItsGood2Be Twitter challenge. Louisville with a big lead. Tweet & retweet! pic.twitter.com/puq3k8UkT1

Hokie fans went at it that Sunday night, trying to catch Louisville, and when the dust had settled on Week 5, VT had accumulated an astounding 8,814 votes, a ten-fold increase over Week 4 … but Louisville had 9,574. It was our first loss.

Oh, well, it had been fun while it lasted, but I figured that if Louisville was going to involve their official football feed (~40,000 followers) and athletics feed (~65,000 followers), the party was over for us VT fans.

And surely it could only be a matter of time before a huge school with a huge athletics following got into it.

But a funny thing happened on the way to the bank: Louisville quit paying attention, and there was only one other week in which they brought that much focus to the contest: Week 8, in which they accumulated 13,108 votes, again narrowly beating Hokie fans (12,783) with Tweets like this:

But other than that, in Weeks 6, 7, and 9-15, it was a Hokie party. Virginia Tech dominated the competition in those weeks. Hokie fans at large took over, and VT started accumulating big point totals that no other school could muster the grass-roots — or official support — to match.

And it got so out of hand that we started tweeting things like this (Nov. 2nd, Week 10):

Louisville won wks 5 & 8 of the Allstate Twitter challenge, but last 2 wks have looked like this. #ItsGood2Be #Hokies pic.twitter.com/x4Zv6u6BfN

Looks like everyone else just gave up. #ItsGood2Be #Hokies pic.twitter.com/CnJ39ou4sH

Here are the week-by-week winners.

I never would have imagined that Virginia Tech could win 13 out of 15 weeks in the challenge. If some of the bigger SEC and Big Ten fan bases had ever gotten involved, VT would probably have been smoked on a permanent basis, but instead, Hokie fans rallied with unmatched focus and consistency, and the result was $130,000 for Virginia Tech athletic scholarships.

In the end, Allstate’s Twitter challenge wasn’t really a “challenge” at all, thanks to a Virginia Tech fan base that embraced the contest on Twitter like no other school. Big contributors to the effort were Twitter feeds of the Student Hokie Club (@StudntHOKIECLUB), BeamerBall.com (@Beamer_Ball), Hokie Vision (@HokieVision), the Hokie Club (@hokieclub), and one of our favorites here at TSL, The Commonwealth Cup feed that counts the days VT has owned the Commonwealth Cup (@CommonwlthCup). Check their Twitter feeds from the fall, and you’ll see scores upon scores of tweets including #ItsGood2Be #Hokies.

As you can imagine, the Virginia Tech Athletic Department is thrilled with the windfall. As the 15 week contest came to an end, @hokiesports tweeted:

Thanks to @WillStewartTSL and everyone @TechSideline for their support of Allstate's #ItsGood2Be #Hokies promotion. There's 2 days left.

Executive Associate AD Desiree Reed-Francois wrote in an email to TSL this week, “We really appreciated the whole online Hokie community, including TechSideline.com, for making this a success.  We could not have done this without the whole Hokie Nation pulling together.”

In these days of $70 million-plus athletic department budgets, including scholarship costs that have skyrocketed over $10 million per year, $130k might not seem like a lot, but it’s almost a full Position Scholarship endowment ($150k, per the Hokie Club web site).

Reed-Francois confirms that the Allstate money will go into the athletic department’s scholarship endowment. “We are setting up an endowment with the AllState funding to allow for continuous annual distributions to help pay for our ever-increasing scholarship costs.”

As we noted in an article almost a year ago, Virginia Tech has raised the specter of funding for those “ever-increasing scholarship costs” having to come out of operating costs in the future, if the Hokie Club can’t continue to raise enough to cover scholarship costs.

Scott Davis, Associate Director of Development for the Hokie Club, said in our March 2014 article linked above, “I guess if the cost of tuition keeps going up, and if we don’t keep pace with that growing cost of tuition, obviously it’s a possibility.”

Almost none of us can single-handedly make a donation in the amount of $130k, but collectively, Hokie fans banded together on Twitter to earn the school a significant amount of money for athletic scholarships.

“Not to be redundant,” Reed-Francois said in our email exchange, “but we cannot say it enough – we really appreciate all that TechSideline.com and others did to promote this contest to the Hokie Nation.  It truly meant the difference between winning and losing, so many thanks!”

Will the AllState #ItsGood2Be Twitter Challenge, or something like it, return next fall? That’s hard to say. But #Hokies fans will be ready if it does, I’m sure.