So, which team were you rooting for in the ACC Championship Game this year? In spite of my general dislike for the Seminoles, I was pulling for them to beat Georgia Tech. Why? Six million reasons – the ACC would have another $6 million to distribute to its members in the current conference fiscal year (2015) by having a team in the playoff. An undefeated Florida State team had a much better chance of making the playoffs if it won the game. It is debatable (editor’s note: very unlikely, actually) that Georgia Tech would have made the playoffs if they had beaten Florida State in the game.

The College Football Playoffs (CFP) is generating a significant amount of money for the Power 5 (P5) conferences this year and in the foreseeable future.   An article in The Business of College Sports dated December 8, 2014 reports the anticipated amounts to all conferences and the various conference distribution models.

So, what does this mean for Virginia Tech and other ACC teams? Last year the BCS payouts for the ACC approximated $30 million. Florida State played in the National Championship Game and Clemson in the Orange Bowl. In the 2013 football season, having one team in the BCS resulted in a conference payout of approximately $24 million, and if you had two teams in a BCS bowl, the conference received an additional $6.3 million for the second game. So, for last season the ACC received approximately $30 million, or $2.14 million per team. This year for the ACC, the CFP will result in a payout of approximately $6 million per team. That additional $3.86 million (or probably more due to the CFP paying most of the travel expenses) pays a lot of bills. Notre Dame is not included – it has a separate agreement with the CFP and will be paid $2.3 million directly by the CFP. Notre Dame will also receive an undisclosed sum as a part of an agreement with the ACC.

In the following schedule I have summarized the anticipated total bowl payouts for the P5 conferences for this year (including the CFP games).   As usual, the SEC is the big winner, but the ACC comes in second in total revenue by a wide margin. This will probably look different in years where the Rose and Sugar Bowls are not part of the playoff games. 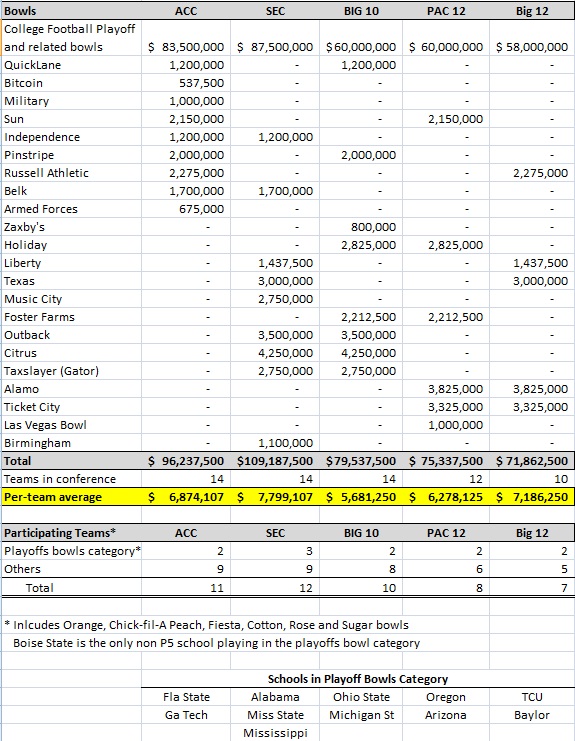 Here’s how the average payout per team breaks down…

Additional info – there are 17 P5 schools that did not make a bowl game for the 2014 college season: