Blacksburg, VA — Bucky Hodges scored two touchdowns, including the game-winner with 1:48 left, to spur the Hokies to a 24-20 win over Virginia and keep the Commonwealth Cup in Blacksburg for another year.

Down 20-17 with just 2:55 left, the Hokies took over on their own 25 and faced 75 yards of turf for the win. The Cavaliers had just shocked the Hokies, driving 89 yards in three minutes and 55 seconds, scoring on a 20-yard TD pass to Zachary Swanson to go up by three. Virginia had mustered almost nothing on offense up to that point, scoring on two field goals and an interception return, but they drove smartly down the field to go ahead, putting Virginia Tech’s 21-year bowl streak and ten-game Commonwealth Cup win streak in dire risk.

Hodges to the rescue. He had just one catch for two yards prior to the critical drive, but after Virginia committed a roughing the passer to move the ball to the Hokie 40, Michael Brewer hit Hodges in stride for a 50-yard gain, down to the Virginia ten-yard line. After a one-yard Sam Rogers run, a pass interference call on the Hoos, and a false start on Ryan Malleck, the Hokies faced first and goal from the Virginia nine.

Brewer dropped back and calmly hit Hodges, isolated in one-on-one coverage, with a slant pass for the score and the win. Hodges was wrapped up just short of the goal line, but rolled over the UVa defender and stretched for the touchdown.

“With the coverage that they rolled to at the snap,” Brewer said, “I knew Bucky was going to be one on one, and we like that matchup.”

That still left the Cavaliers with two timeouts and 1:48 to go for the win, but unlike the previous drive, the Hokie defense kept Virginia out of the end zone, turning the Cavaliers over on downs at the Hokie 44 with an eight-yard sack with four seconds left. The Hokies took a knee, and the Commonwealth Cup won’t have to travel up 81 and across 64 to Charlottesville for another year.

The two late touchdown drives were two of just three offensive scores in a game that was mostly ruled by defense and special teams. The first 23 points were non-offensive scores, and neither offense broke through until Brewer hit Cam Phillips with a 36-yard touchdown pass with 15 seconds left in the third quarter to put VT up 17-13.

For their part, the Hokies got a first-quarter 22 yard field goal from Joey Slye that capped a 15-play, 69-yard drive.

With the score 3-3 after one quarter, the Hokies scored the first touchdown on a blocked punt recovered in the end zone in the second quarter. After A.J. Hughes pinned Virginia at their one-yard line with a 38-yard punt, the Hokies defense forced a Virginia punt from the two-yard line.

Tech freshman C.J. Reavis broke through on the right side of the Virginia punt team and reached out to block the punt downward onto the turf, where Hodges covered it to make the score 10-3 with 9:30 to go in the second quarter. 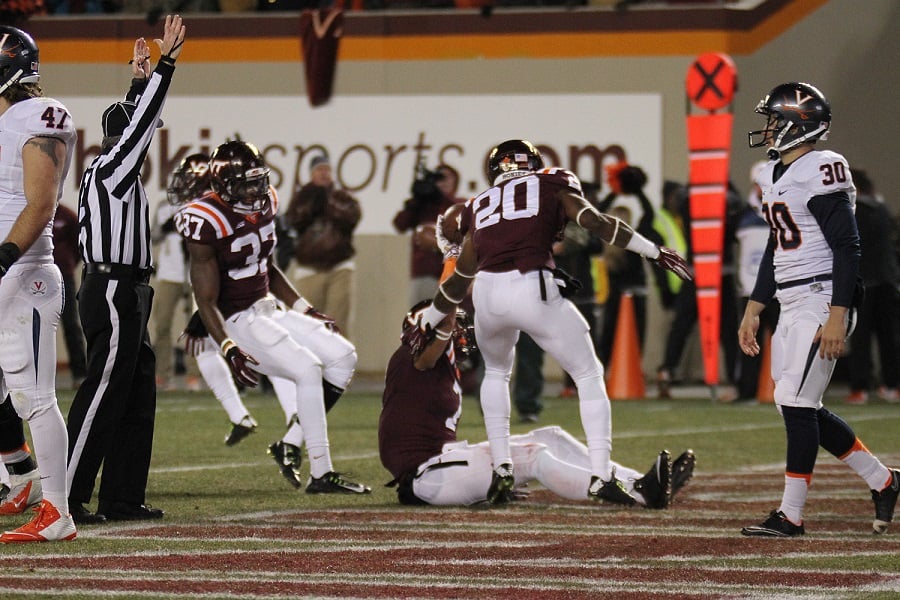 Virginia closed the gap to 10-6, then got their own breakthrough later in the quarter with an interception return from an unlikely source. With the Hokies pinned deep in their territory, Brewer dropped back on first down from the 12, and his arm was hit as he went to throw. The ball fluttered in the air to Virginia defensive tackle David Dean, who snatched it and rumbled into the end zone to make it 13-10, Cavaliers.

The score stood that way until Phillips’ 36-yard catch near the end of the third quarter that put Tech up 17-13. Both offenses sputtered much of the night, but Phillips made his catch at the end of a 7-play, 83-yard drive, Tech’s longest of the game.

That set the stage for Virginia’s late go-ahead score, and the Hokies’ response.

With the win, Tech secured their 22nd straight bowl invitation. The 6-6 (3-5 ACC) season was a struggle, but the Hokies will play on. Frank Beamer won’t have to face questions about a team failing to make a bowl game after all these years. “We’ve been to a bunch of bowls in a row,” Beamer said afterwards, “but I don’t know of a team that deserved it more than this one.”

The game was a rough one, more physical than most VT-UVa matchups, as both teams fought for bowl eligibility. The Hokies made use of backup QB Brenden Motley more extensively than they did against Wake Forest, but Motley was first made gimpy by a bad ankle, then was knocked out of the game with concussion symptoms. He rushed eight times for 28 yards and missed on both of his pass attempts.

Brewer took a beating as usual, though he was only sacked twice. On his interception, Virginia defensive end Mike Moore swatted Brewer’s arm. Brewer went gingerly to the sideline, where he was tended to and then threw some warmup passes, wincing with each toss.

“There was a few things that were not feeling very well,” Brewer said stoically after the game.

The Hokies sacked Virginia quarterback Greyson Lambert twice, the second one knocking him out of the game on Virginia’s last possession. 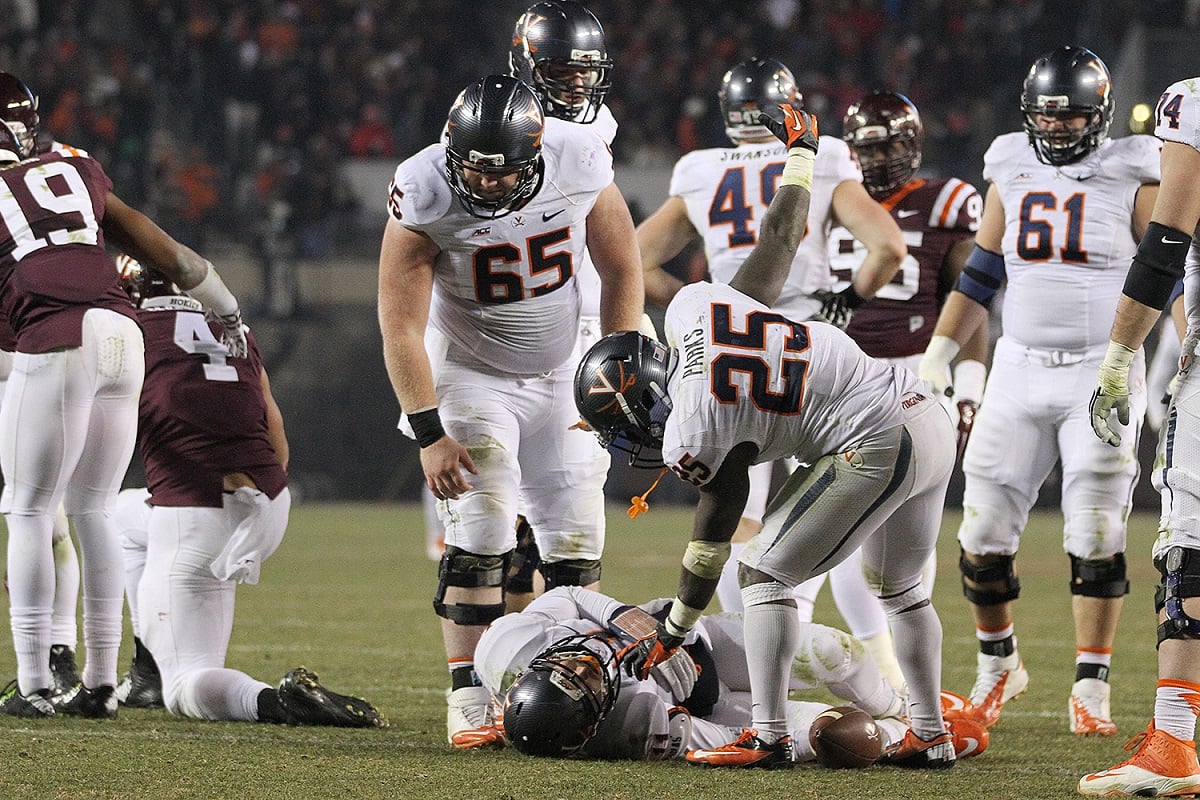 Lambert was replaced by Matt Johns, whom the Hokies sacked twice on that same possession, giving Tech three of their four sacks in the last couple of minutes of the game.

J.C. Coleman continued his three-game tear, rushing 18 times for 118 yards (6.6 ypc). Coleman was only the second player to go over a hundred yards against Virginia this season (Georgia Tech’s SynJyn Days was the other), and he now has 56 carries for 311 yards (5.6 ypc) in his last three games.

“I thought that guy was a serious runner tonight,” Beamer said.

Coleman lost only two yards rushing on the night, and when he needed a break, Sam Rogers carried it eight times for 39 yards (4.9 ypc). As a team, the Hokies rushed for 198 yards on 40 carries (5.0 ypc), including two sacks that lost six yards. 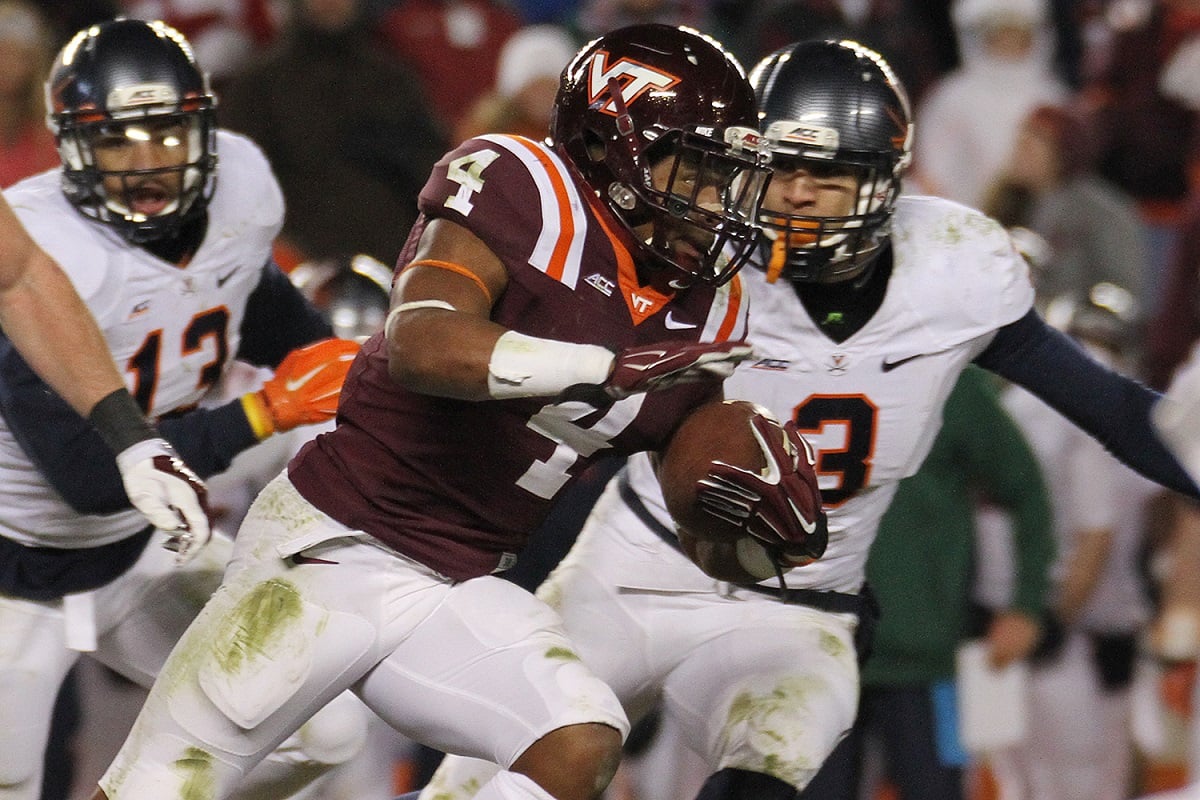 It was the second most rushing yards against Virginia this season, behind 268 yards by run-heavy Georgia Tech.

Perhaps more remarkably, the Hokies much-maligned offense gained 433 yards, the most against the Cavaliers all season.

“We thought personnel-wise, it was the second-best defense we’ve played all year,” offensive coordinator Scot Loeffler said. Loeffler has been under fire all week after Tech’s abysmal offensive performance against Wake Forest, leading to speculation that Loeffler won’t be back next year for the Hokies.

“This has probably been the hardest week of my career,” he acknowledged. “We need to get healthy and get these young guys going. We’re going in the right direction, it’s just been a struggle to get there.”

With so much at stake — the winner goes bowling, and the loser goes home — tensions were high. The two teams woofed at each other before the coin toss, and Corey Marshall was blunt afterwards in his feelings about Virginia:

#Hokies DT Corey Marshall on #UVA: "To have them doing what they were doing made you want to go out and smash 'em. And that's what happened"

#Hokies Corey Marshall on #UVA: "I don't know what's up with those guys. 10 years running, it's been that type of [stuff] leading up to it."

Marshall: "I'm not pulling any punches with those guys, because I feel like they don't respect us on the other side." #UVA #Hokies #UVAvsVT

“I would say the state of Virginia should be proud of its two teams,” Beamer said. “Tonight was a hard-played, tough, exciting, big play game with lots of guys coming through on both sides in the clutch. We feel fortunate to have won.”

• The weather at kickoff was 27 degrees, making tonight just the sixth game under Beamer to kick off with sub-freezing temperatures. Tech is now 5-1 all-time in these games under Beamer (5-0 at home) with the last one coming in 2012 against Virginia, a 17-14 win. The 27 degrees makes tonight the second-coldest game under Beamer. The only game colder at kickoff was the 1987 game against Cincinnati, which was 25 degrees at kick, and the Hokies won 21-20.

• Tech is now 20-14-1 all-time on Fridays, but hasn’t played a regular-season Friday game since beating Boston College at home in 1999 to clinch a spot in the national championship game. The only other time Tech and Virginia played on a Friday was in 1996, a 26-9 win for the Hokies in Blacksburg, which also came on Black Friday.

• Joey Slye’s field goal in the first quarter extended Virginia Tech’s scoring streak to 255 games. The streak is the fifth-longest active streak in the FBS and the 11th-longest of all-time in the Division I-A/FBS history.

• Tech is now bowl eligible for the 22nd straight year, the second-longest active streak in the country. 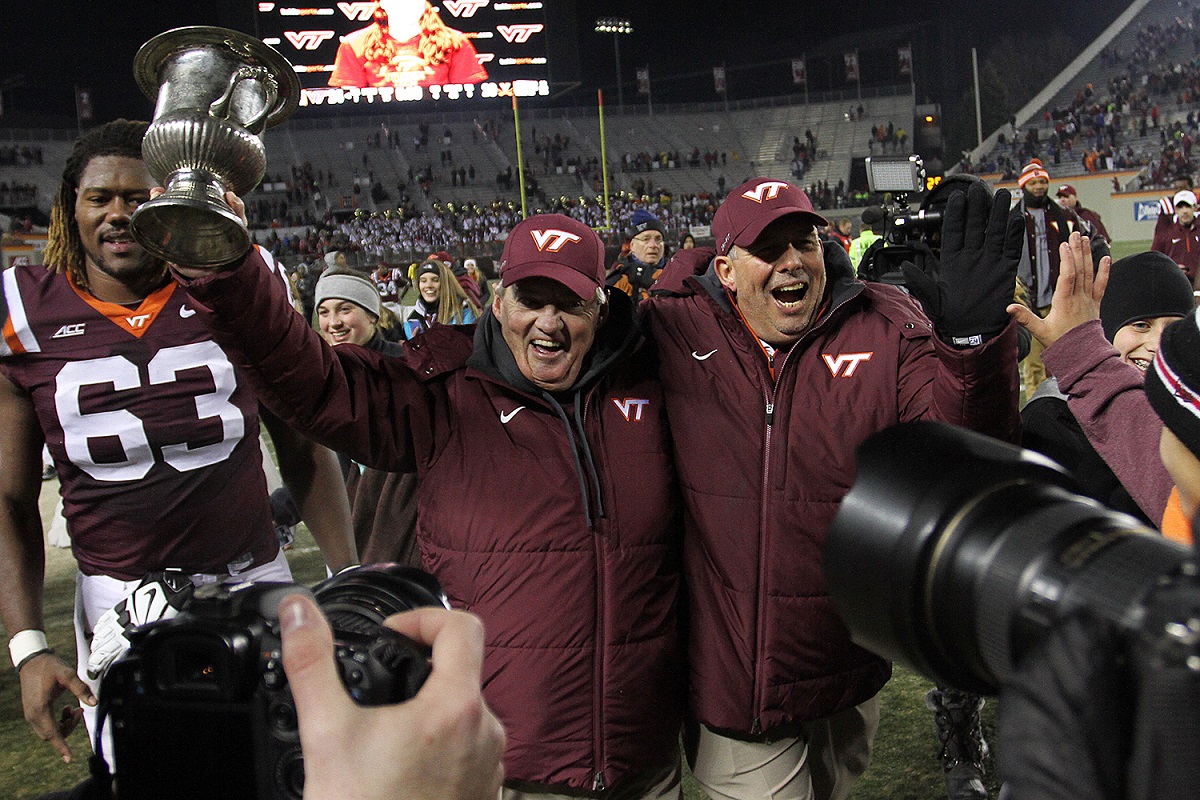 — All photography by Ivan Morozov — 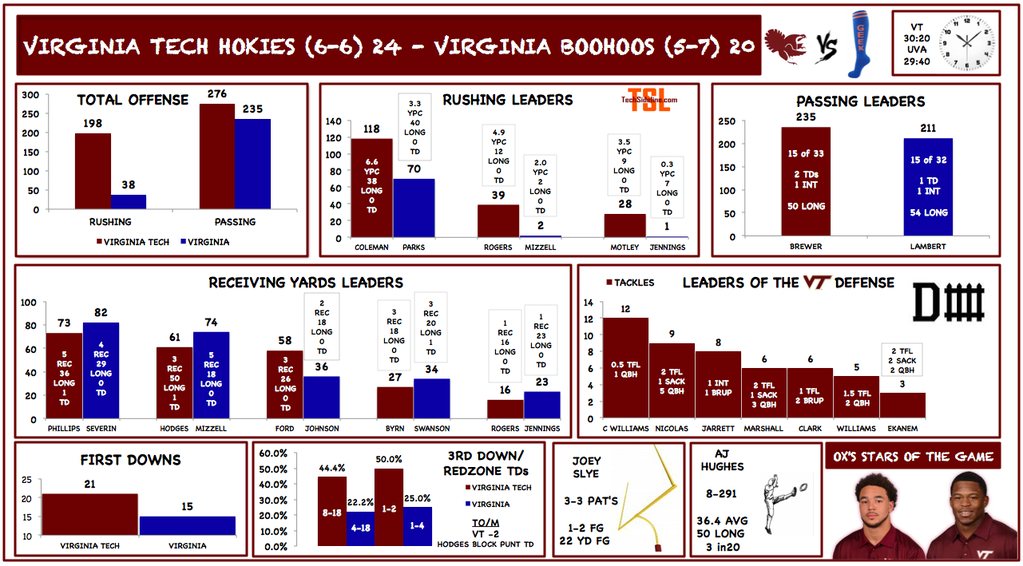