Time and time again, when Virginia Tech found itself against the ropes and hope was fading fast, it found one way after another to punch back and stay alive against Boston College Saturday.

The Hokies needed a fake punt, a successful third-and-17 and two fourth down conversions, all in the fourth quarter, to take a one-point lead over the Eagles with seven minutes remaining in the game.

But four minutes later, with Tech trailing by two and its defense on the field in a must-stop third-and-10 situation, the Eagles were finally able to deliver the knockout punch in their 33-31 win over the Hokies. 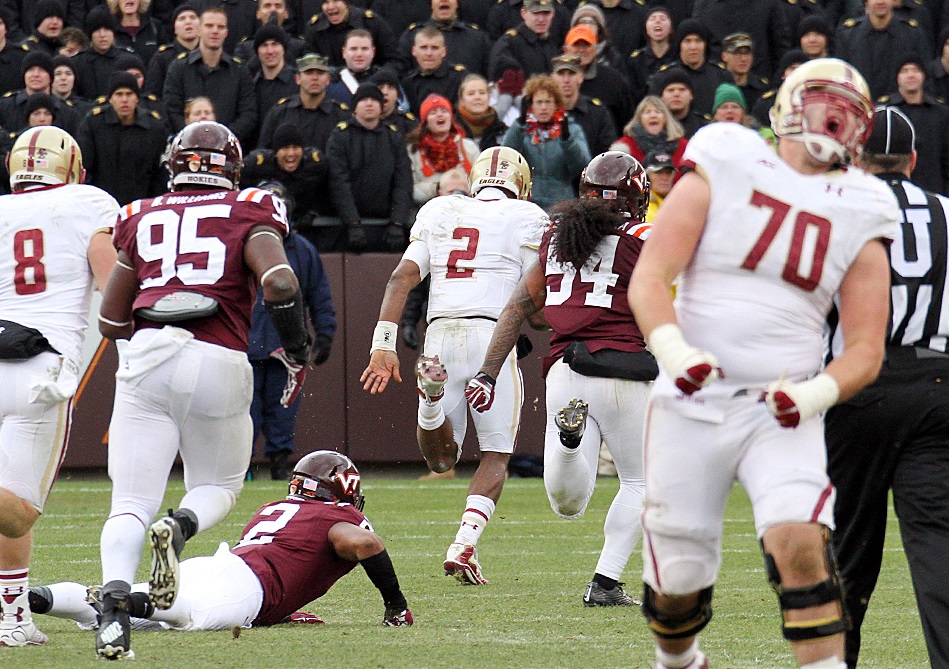 “It sucks losing,” fullback Sam Rogers said. “It’s never going to be fun losing. I’m never excited about a loss but I am excited about this team and how hard we play. I’ll always go to bat with these guys and I love playing with them.”

Rogers and the rest of the Hokies were issued a toughness challenge by the coaching staff this week, leading up to a game against a program widely regarded as one of the toughest in the conference.

“We knew they are a top-ten defense and it was pretty much a test just to see what we’re made of,” senior wide receiver Willie Byrn said. “I think, we didn’t execute all the time, but we fought the whole time.

“When you fight so hard and put everything into it, you feel like you’re doing enough and then it kind of just gets ripped out at the end. It’s not a feeling you want to feel, especially your last year.”

The Hokies entered the fourth quarter trailing 23-10, not having found the end zone since a 95-yard drive to start the game.

Facing a fourth-and-nine from his own 34-yard line, head coach Frank Beamer opted to roll the dice. The Hokies lined up in punt formation and Derek Di Nardo, a redshirt senior linebacker and punt protector, caught the direct snap and scooted around the right corner for 30 yards, re-energizing a deflated and relatively vacant Lane Stadium. 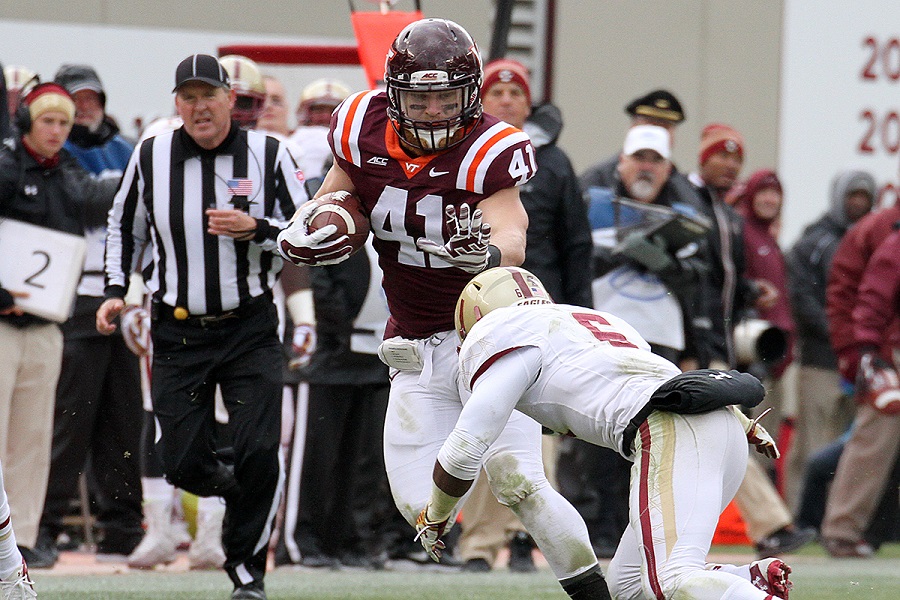 “We had been working on it for a while,” Frank Beamer said. “It worked well. Di Nardo did a nice job and we just needed a spark. We needed something.”

Six plays later, Tech was facing a fourth-and-goal from the one-yard line. Michael Brewer ran a quarterback sneak and, aided by a push from behind by Rogers, cut the lead to six points, 23-17.

Brewer finished the afternoon 31-for-48, and threw for 345 yards and two touchdowns.

A strong defensive stand then put the Hokies in position to take the lead for the first time since four seconds into the second quarter.

The next drive, which started with 10 minutes remaining, was kept alive on a well-executed fourth-and-five from Boston College’s 24-yard line, in which Rogers released out of the backfield and picked up 17 yards as a counter to the heavy Eagles blitz.

“There is no question in my mind we answered the challenge of toughness,” Byrn said. “Execution was here and there. Execution was great at some points and it was low at other points, and that’s where it has to change. But in terms of answering the call we did. We battled.”

Two plays later Brewer found tight end Bucky Hodges inside the two-yard line. Hodges was stood up by Eagles defenders on the goal line but kept his legs moving and received a push from offensive lineman David Wang and others to take a 24-23 lead. 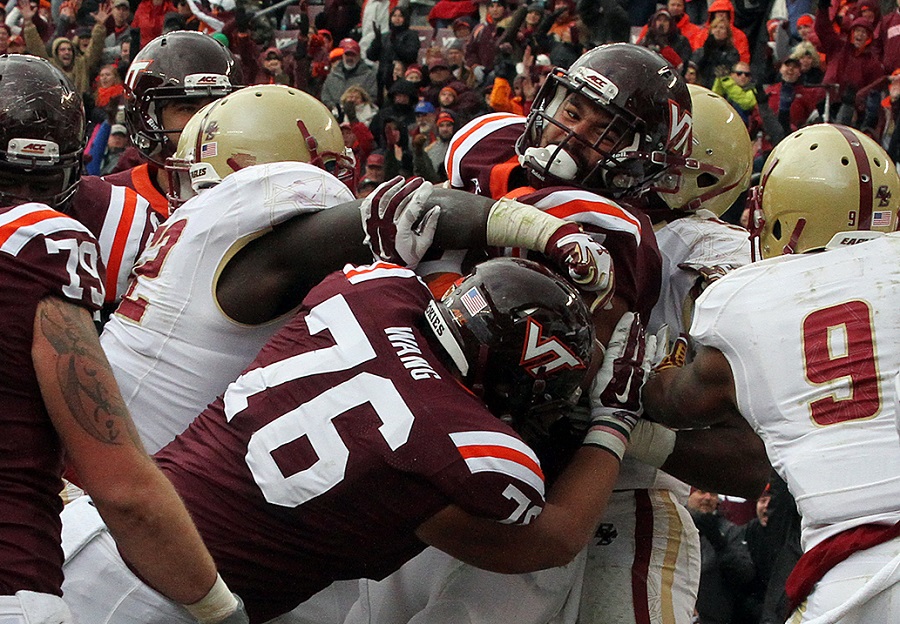 Boston College responded with a field goal drive to regain the lead, and, after a Tech three-and-out, Murphy’s 57-yard game-sealing run.

The Hokies were able to lead a scoring drive, but there was not enough time left to overcome a two-score deficit. Boston College recovered the ensuing onsides kick to snuff out Tech’s last hope.

“Proud of our football team,” Beamer said. “Proud of how hard these kids play, how much effort. We’re a team that’s not good enough to make some terrible mistakes field position-wise and that got us a little bit.”

The Hokies were forced to start from their 5 yard line or worse four times throughout the game, but its two biggest special team blunders came on a muffed punt return that led to three easy Eagles’ points and a blocked Joey Slye field goal right before half, which would have cut the then-14-10 deficit to one.

“I am frustrated,” Wang said. “I am. There is no hiding it, but we did some good things today and I saw a lot of fight with the whole offense and the defense the whole day. Nobody gave up and that’s all that we can ask for when we go out there.”

“Instead of playing for yourself or playing for the guy next to you, play for the seniors,” redshirt freshman Wyatt Teller said. “That’s one thing when I came in I talked to Dave and Caleb about. I was starting and they were like just do your job. And I was like, ‘No, I’m going to play for you guys.’”

Tech, all but eliminated from a chance to play in the ACC Championship, has two weeks to prepare for its next opponent, Coastal front-runner Duke. The Blue Devils beat Pittsburgh 51-48 in double overtime to run their record to 7-1 (3-1 ACC).

The Hokies must win two of their final three games to extend the nation’s longest consecutive bowl streak, which sits at 21.

While Brewer, Bryn, Teller and Hodges all admitted their competitive nature wishes they didn’t have to wait so long to get the sour taste out of their mouth, they have no say in the matter. But, at least according to Byrn, it’s about growing, not waiting. 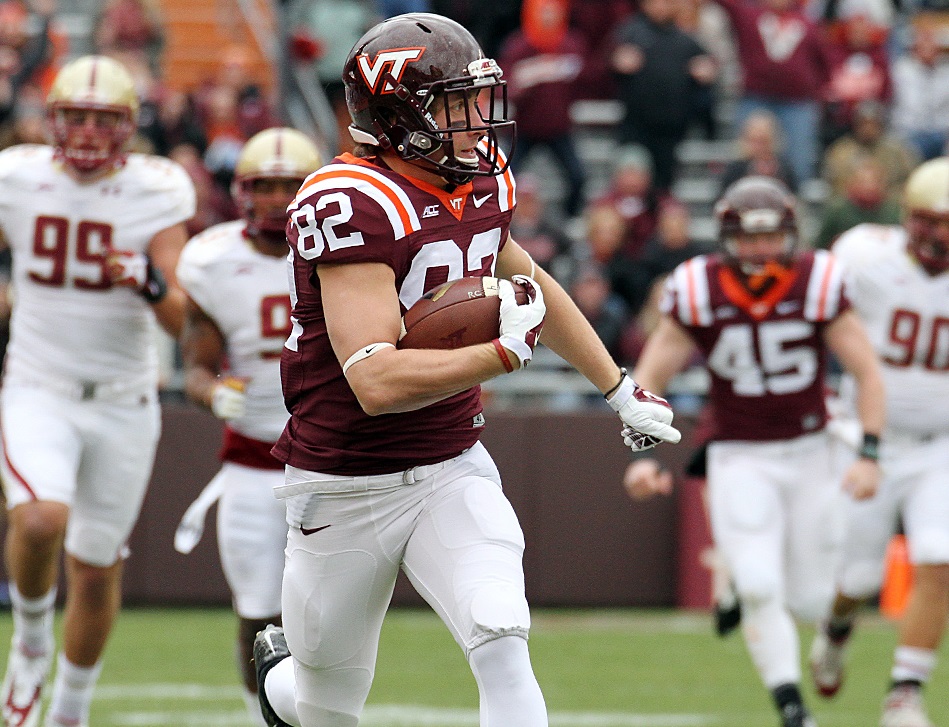 “Where it starts is this Tuesday,” Byrn said. “We have a bye week. We are 4-5. Naturally, some younger guys would think they have some years ahead and this season you know you’re not going for the ACC championship anymore, you’re not really in the running, so you kind of just take a Tuesday off especially in your bye week. We’re going to see what this team wants to do on Tuesday. That’s what it’s all about. That’s where this starts.”

• Temperature at kickoff was 43 degrees. Under head coach Frank Beamer, the Hokies are 29-14 overall (21-7 at home) when the temperature is 45 degrees or below (not wind chill) at kickoff.

• Willie Byrn had a 44-yard catch in the first quarter, marking the longest offensive play by the Hokies this season.

• True freshman Marshawn Williams scored a touchdown in the first quarter, his fourth of the year. Twenty-two of the first 30 touchdowns on the season have been scored by freshmen (24 of 30 by underclassmen).

• Williams’ touchdown in the first quarter extended Virginia Tech’s scoring streak to 252 games. The streak is the fifth-longest active streak in the FBS and the 11th-longest of all-time in the Division I-A/FBS history. The score came on Tech’s first drive of the game, the 82nd time in the streak that has happened and fifth time this season.

• Virginia Tech scored first in the game. This is the first time the Hokies lost when scoring first (4-1).

• BC’s Myles Willis had a 68-yard run for a score in the second quarter, the longest offensive play the Hokies have given up this season.

• Joey Slye had a field goal blocked at the end of the half. It’s the second field goal he’s had blocked this season. He’s also had one PAT blocked.

• True freshman Isaiah Ford had seven receptions in the game to give him 41 for the season, breaking the Tech freshman record for catches in a season set by Josh Stanford, who had 40 last season. His 522 yards receiving on the season are the second-most ever by a freshman at Tech (Stanford, 640, 2013) and the most by a true freshman, breaking Eddie Royal’s mark of 470 set in 2004.

• Tech has trailed at the break four times this season and has yet to win a game when it was trailing at the half.

• Michael Brewer scored on a sneak in the fourth quarter, his second rushing score of the season. He threw for a career-high 345 yards and completed 31 passes. His 31 completions are the most-ever in a game under Beamer, topping his 30 completions against ECU earlier this year. The 31 completions are the second-most in school history, just behind Don Strock’s 34 against Houston in 1972.

• Freshman tight end Bucky Hodges recorded his fifth touchdown catch of the season, the most by a Tech tight end since Andre Smith had five in 2010. Jeff King holds the school record for touchdown catches in a season by a tight end with his six in 2005.

• Tight end Ryan Malleck’s touchdown catch late in the game was the first of his career.