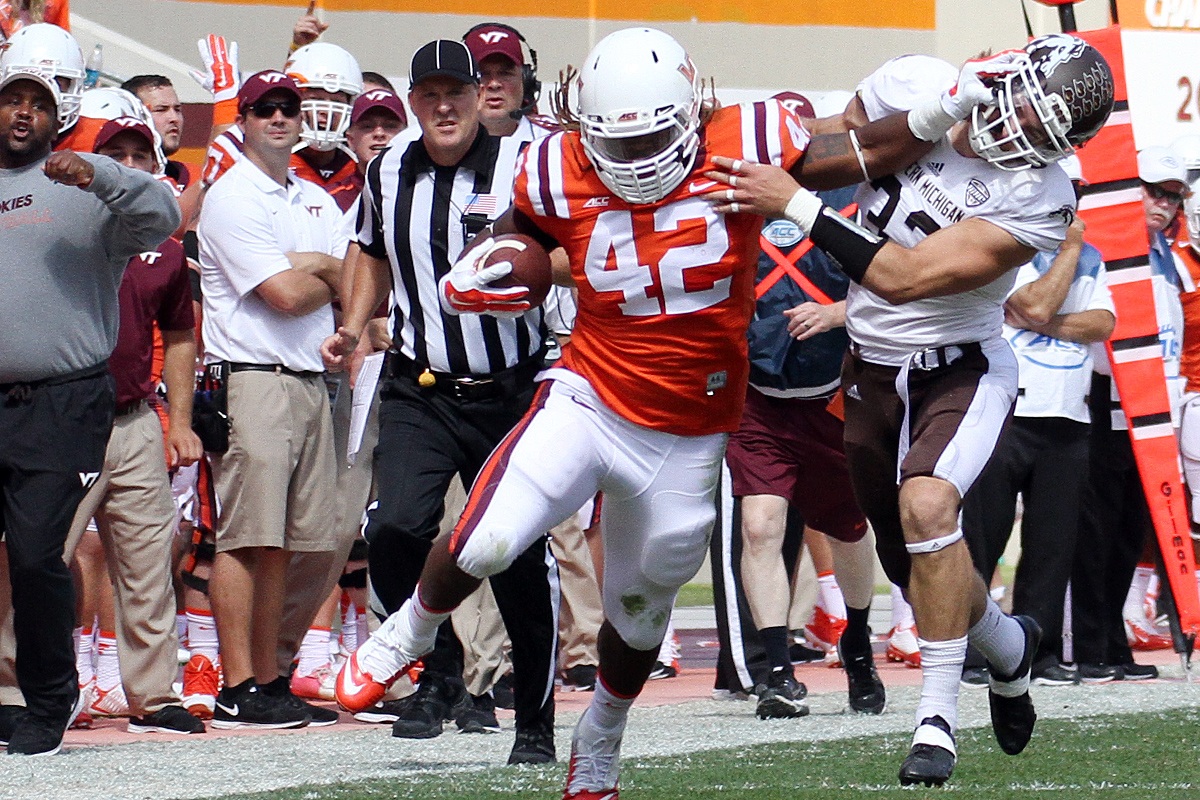 For two weeks in a row, Virginia Tech did not run the football successfully. Given all the emphasis from the coaching staff in recent weeks and months about how the team was determined to consistently move the ball in chunks on the ground, the ground game against ECU (91 yards) and Georgia Tech (127) was a failures.

Halfway through Saturday’s game against Western Michigan, it looked as if the Hokies were on pace for another disappointing rushing performance – Tech had 81 yards rushing at halftime, but 42 of those came on one Marshawn Williams carry early in the first quarter.

The coaching staff, and running backs coach Shane Beamer specifically, was not content with the path they were on.

“I think we all as a staff made it pretty clear that we are Virginia Tech and we need to run the ball in the second half,” Beamer said.

“I just told Lefty (offensive coordinator Scot Loeffler), I don’t give a dang if they have eight guys, nine guys, however many guys they have in the box. If we are Virginia Tech and these running backs are Virginia Tech running backs, we have to break a tackle. We have to make somebody miss. Run through somebody, run around somebody, run over somebody, whatever. I went in the locker room, I told the running backs that we’re going to run the football in the second half. I told Lefty that I don’t care how many guys are around the line of scrimmage, make them miss and win those battles. The conversation was real brief with them. It was, ‘don’t make me a liar.’

The high-intensity motivation wasn’t restricted to the coaching staff, either. Laurence Gibson, a fifth-year senior offensive tackle, is normally quiet and soft-spoken. Because of that, when he raised his voice at halftime people knew it was serious.

“(Gibson) gave us a great speech during halftime, and it got us real fired up to come out of the half and just run the ball as hard as we could and just move the line hard up the field,” veteran offensive lineman David Wang said. “It shows that he really cares about the team and he really cares about us doing well. And when he speaks up, we all listen.”

Whether it was the fire and brimstone inside the locker room or something else entirely, the running game fired on cylinders not yet seen by Tech fans this season.

With the mission clear and simple – Beamer said the Hokies ran two different running plays the whole second half – Tech ran for 227 yards on 29 carries in the final two quarters.

The dominated the line of attack and controlled the football for over 19 minutes in the second half.

“I don’t know that any of us (coaches) were happy the way we executed in the first half,” offensive line coach Stacy Searels said. “We certainly aren’t happy with the turnovers, we weren’t happy with not moving the ball and running the ball and we knew we needed to pick it up. We had to give our guys the best chance to be successful in the second half.”

Now, the Hokies’ focus, as it so often does, becomes about building on the success and parlaying it into a dominant rushing attack and a win against North Carolina (2-2, 0-1 ACC).

“If I remember correctly, (UNC) played East Carolina and gave up some rushing yardage and then they came out here and kicked our rear ends up and down the field when it came to running the football,” Loeffler said. “We’re expecting their best and they’re more than athletic enough. They are a good football team.”