Western Michigan was a bad football team last year, going 1-11. However, they are 2-1 thus far in 2014, with wins over Idaho and Murray State, and a narrow loss on the road at Purdue. They are a much improved football team under second year coach PJ Fleck (just 33 years old).

Fleck is a spark plug who is known for wearing cleats to practice and running routes with his wide receivers. He had a very young offense a year ago, but he stuck with his plan. He still has plenty of youth this year, but the results have been much better.

The Tale of the Tape, by OXVT 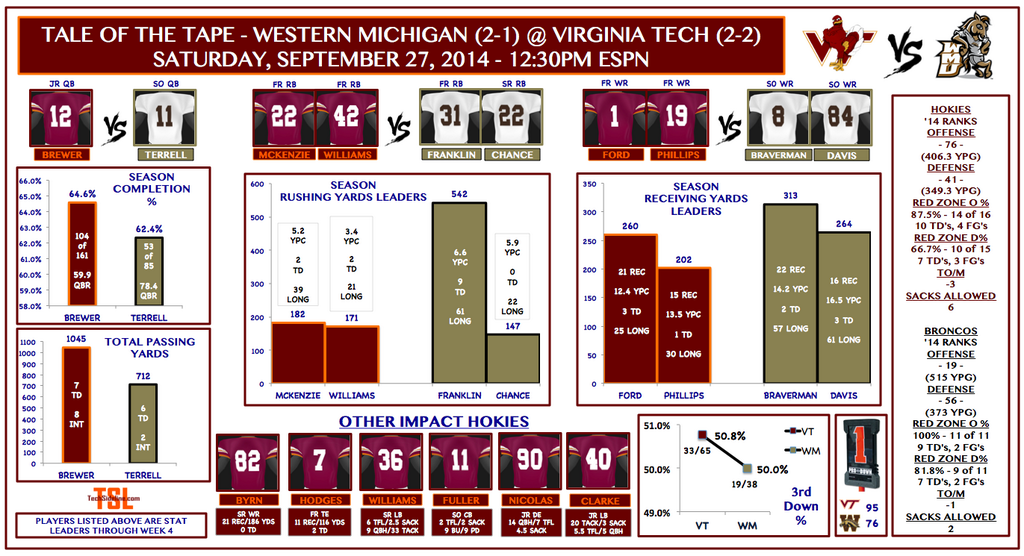 All offensive coordinators want to achieve some sort of balance between the run and the pass. Through the first three games of the season, Western Michigan has been able to do that.

Granted, they haven’t played the most talented defenses. Purdue is #62 (and lost to Central Michigan 38-17), Idaho is #115, and Murray State is a 1-AA program. Still, that’s an impressive start. Offensive coordinators everywhere wish they could achieve the balance the Broncos have found over their first three games.

Much of Western Michigan’s offensive success revolves around true freshman tailback Jarvion Franklin (6-0, 220, Fr.). He has been outstanding through his first three football games. Here are his game by game stats:

Franklin is #3 in the country in rushing yards per game, and #4 in all-purpose yards. He is averaging 180.7 yards per game, and he has totaled 542 yards on the season. He’s only 25% finished with the regular season, and considering he only rushed for 1,265 yards as a senior in high school, I don’t think anybody saw this coming.

Obviously the #1 key to success against Western Michigan is stopping their running game, and that begins with stopping Jarvion Franklin. I haven’t seen Franklin or this Western Michigan team play, but those numbers jump out at you in a big way. The Hokies have to stop him, or it could be a long day for the defense.

Let’s take a closer look at each guy.

QB Zach Terrell: Terrell is completing 62.4% of his passes this year for 712 yards, with six touchdowns and two interceptions. He was an advanced passer in high school, and he also runs a 4.6 in the 40. He’s a dangerous player with a bright future.

WR Corey Davis: Davis will line up on the outside. He caught 67 passes for 941 yards and six touchdowns last year as a true freshman. He has 16 catches for 264 yards thus far in 2014. He is on his way to having a very prolific career in Kalamazoo.

WR Kendrick Roberts: Roberts is Western Michigan’s other outside receiver. He started nine games a year ago and caught 23 passes for 354 yards.

WR Daniel Braverman: Braverman is small, and he will play in the slot. However, he is a very productive player. He has 22 catches for 313 yards and two touchdowns through the first three games. He grew up in south Florida, where he was used to playing against top competition.

What makes Western Michigan’s running success surprising is the size of their offensive line. Check this out:

That’s one of the smallest, if not the smallest, offensive lines the Hokies will face all season. In particular, the Broncos are small on the inside at right guard and center.

However, four of those players are returning starters. The weak spot is at right guard, where Mario Rodriguez was moved from tight end to guard in the offseason. It will be difficult for a natural tight end who weighs 265 to block ACC defensive tackles. This will be a matchup to keep an eye on this coming Saturday.

I shouldn’t say this because it’s probably not true, but the Hokies shouldn’t have much trouble getting a running game going this week. Check out the size of this Western Michigan front seven:

Cleveland Smith is only 6-0, 245 according to the Western Michigan depth chart, though their online roster lists him at 6-1, 233. Either way, he’s small. He plays the three-technique and tries to use his quickness between the offensive guard and offensive tackle.

The strongside linebacker is under 200. The weakside linebacker is only 5-9. One of the starting defensive ends is only 216. Overall, the front seven averages just 239 per man, and obviously Richard Ash does a lot to bring up that average. He will present a challenge for Tech’s interior linemen, specifically center Caleb Farris.

All that being said, the average weight of Western Michigan’s front seven is actually higher than Tech’s, 239 to 238.6, and VT’s run defense has been in pretty good shape (Georgia Tech will skew the numbers). Overall, the Broncos are doing pretty well against the run for a team their size. They are allowing 120.7 yards per game and 3.9 yards per carry.

Hokies have an advantage in the passing game

Virginia Tech has an athleticism advantage in the passing game, and they should be able to take advantage of it. Western Michigan is allowing 252.3 yards per game through the air. Here are the passing numbers they have allowed in each game…

The Broncos have played well against the pass in two of their three games. However, Idaho was able to exploit weaknesses in the Western Michigan secondary, and if they can do it (no disrespect to the Vandals), the Hokies should be able to do it as well.

CB Donald Celiscar (5-11, 185, Sr.): Celiscar was a Second Team All-MAC performer last season. He has been starting since he was a freshman.

CB Ronald Zamort (5-10, 160, r-Jr.): Zamort is from Florida (as is Celiscar). He has Western Michigan’s only interception on the season, and he has also broken up five passes. He only has three tackles in three starts, which means his coverage has been good.

FS Justin Currie (6-3, 201, Jr.): Currie is in his third season as a starter, and he made 113 tackles last year and 98 the year before. It’s a bad sign when your safety has to make that many tackles. He only has 18 through three games this year, which is a sign that the Western Michigan defense has improved. I believe Currie is vulnerable in the passing game, and in fact I think the Broncos are weaker overall at the safety spots than they are at corner.

SS Rontavious Atkins (6-0, 194, Sr.): Adkins has started off and on since he was a freshman, but he missed most of last season with an injury.

The different between a Power 5 conference team and a MAC level team is generally noticed at the skill positions. Tech’s top receiving targets, such as Isaiah Ford, Cam Phillips, Willie Byrn and Bucky Hodges, should all have favorable matchups on Saturday. I think the Tech passing game can have a big day. This secondary isn’t as good as Georgia Tech’s, and the Hokies lit up the Yellow Jackets through the air (when they weren’t busy throwing picks).

I look for Virginia Tech to continue to try to quicken the pace on offense. The more plays they run, the more chances they’ll have to take advantage of their superior athleticism.

Western Michigan has never scored a single point against Virginia Tech. In three meetings, the Hokies have won 31-0 (2001), 30-0 (2002) and 2004 (63-0). That’s pretty impressive. That being said, I think we can most definitely expect the Broncos to score this time around. They haven’t faced a good defense yet, but any offense that is putting up 520 yards per game has my attention.

This is a much better Western Michigan team than I thought it would be before the season started. They have already won twice as many games as they did all of last season, and their game against Purdue was a one possession game until the final minutes. They outgained the Boilermakers that day and could easily be 3-0.

Also, I think the Hokies will be better prepared this week. They have lost back-to-back home games, and they’ve arguably done more to beat themselves than their opposition has done. The coaching staff has been much more demanding in practice this week (as far as I can tell). After Western Michigan, the Hokies travel to UNC, and Tech’s issues need to be fixed by then. This is the weekend things need to start turning around.

PJ Fleck seems to have Western Michigan heading in the right direction this year. That being said, this is MAC level talent against ACC talent. This is a game Virginia Tech should win comfortably.

Will Stewart’s Take: This game will help answer the question of what we can expect from the Hokies for the rest of the season. We know they’re not as good, week in and week out, as they were against Ohio State. ECU is on their way to a ten-win or eleven-win regular season, so that’s not a horrible loss. We also know that without the mistakes and turnovers, the Hokies would have beaten Georgia Tech, perhaps handily.

Right now, we think the Hokies are a young team, capable of some good stuff, particularly in the passing game. Injuries are starting to pile up, which is a concern, but the Hokies should still be competitive in the ACC Coastal, especially if they eliminate the turnovers and decrease the penalties.

But if the Hokies struggle with Western Michigan, who used to be VT’s whipping boy (Tech outscored the Broncos 124-0 in three games from 2001-2004, and that is not a typo), that will cause a seismic shift in the perception of this team … which would be nothing new; that’s been happening all season, both to the good and to the bad.

One thing that won’t be wide open, I think, is the scoring. After VT scored 34 and 35 points in weeks one and two, I picked the Hokies to score in the 30s against ECU and Georgia Tech. They have averaged 22.5 points per game, instead. So I’m still picking the Hokies to win, though I’m not sure exactly what it will look like, and my score prediction is much more conservative.

What's your prediction for the VT-WMU game? (VT is favored by 21)