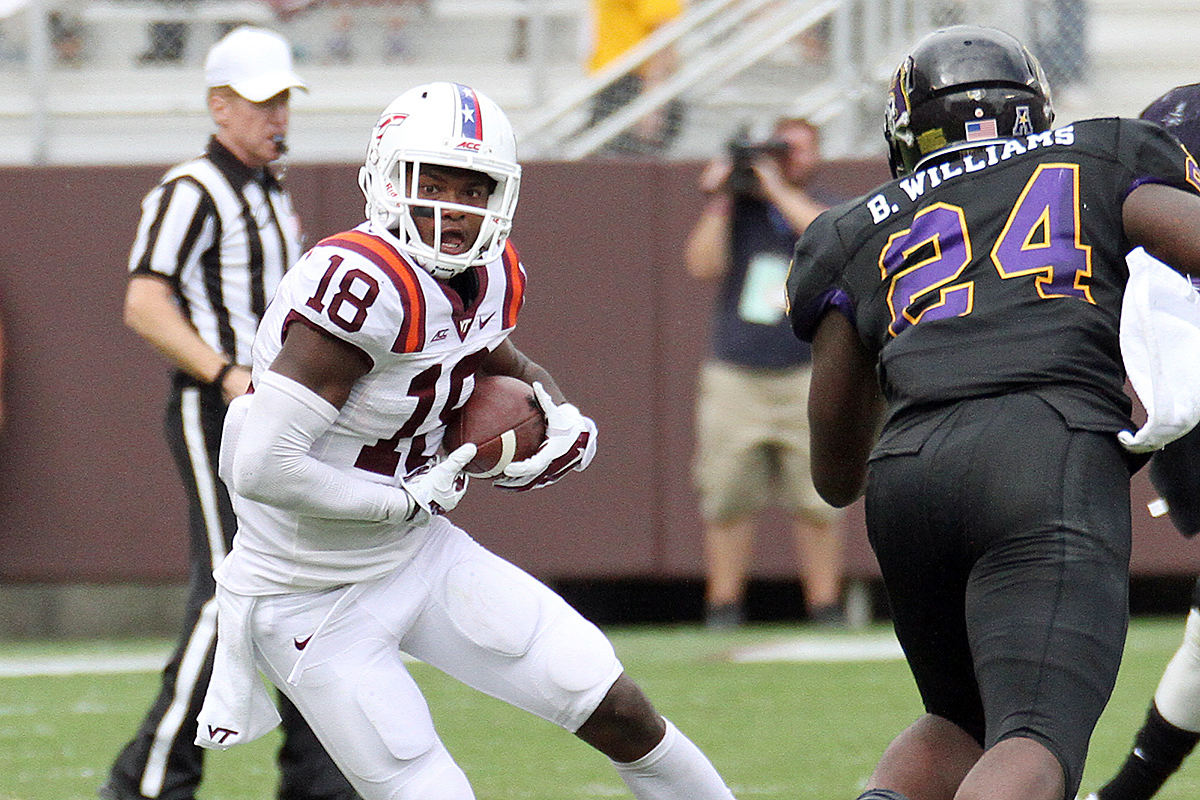 For months now, it’s been clear that this year’s Virginia Tech football team would be a relatively inexperienced bunch.

Yet as the days go by, the team seems to getting younger and younger, playing more and more guys that haven’t yet recorded extensive minutes at the college level.

Whether a result of injury or personal reasons, as Virginia Tech preps for Georgia Tech, the Hokies will be relying heavily on younger players on both sides of the ball.

It was announced Tuesday that r-sophomore wide receiver Josh Stanford would be taking a leave of absence from the team for an undetermined amount of time. That places true freshmen Isaiah Ford and Cam Phillips even further in the spotlight.

Due to their natural talent level and a lack of depth at the receiver spot, both Ford and Phillips have already recorded significant playing time this season – the duo has 22 catches for four touchdowns in Tech’s first three games.

“I think they’ve kind of outdone my expectations this early in the season,” wide receivers coach Aaron Moorehead said. “I felt like at some point those guys would be big-time contributors. Like I said before the season, were they going to start, were they not going to start, who knows? But that would play itself out.”

During the second half of the East Carolina game, Ford and Phillips were quarterback Michael Brewer’s top targets. Still, six combined starts for starting wide outs isn’t a dream scenario.

“To think at this point, four games in, that both of those guys could potentially be starting Saturday, I wouldn’t have told you that,” Moorehead said. “But, it’s great. If those are the best two guys, they are going to be the starters.”

“I wouldn’t say I’m a flat out starter, because every day I have to put in work and prove my worth,” Phillips, who figures to start in Stanford’s spot, said. “I’m trying to work hard everyday at practice and keep finding coach’s eyes.”

Perhaps slightly more worrying given the extremity of the opponent’s game plan is the youth and inexperience that could see the field for much of the game at defensive tackle.

Regular starters at that spot, Corey Marshall and Luther Maddy, both practiced in some capacity Wednesday, but neither is a definite to go Saturday.

Marshall missed the ECU game with an ankle injury, but defensive coordinator Bud Foster is hopeful he’ll be ready to go. Maddy, on the other hand, injured his knee against the Pirates, and although Foster said he did “quite a bit of stuff” during practice, his status is less clear.

Even if one or both play against the Yellow Jackets and their triple option, backups Nigel Williams, Woody Baron and Ricky Walker will figure in.

“I feel good about those other guys,” Foster said. “I do. We can’t afford to get anybody else hurt right now. I think Corey is going to be ready to go. Luther, we will get out of him what we can. I think Nigel will do a good job. Woody Baron’s had a really good week of practice and Ricky Walker’s done a nice job.”

No matter who plays at defensive tackle, their job will be paramount.

The two men in the middle have the responsibility for the dive part of the triple option, and in years past have been a fundamental part of Tech’s success against Paul Johnson’s crew.

“Those two guys, Luther and Derrick, kind of owned the middle of the line last year,” Foster said. “You’ve got to be physical at the point of attack. They give you some big splits. We like to use some quickness at times to take some gaps here and there. Some of that comes with experience a little bit. We’ll just see.”

Even at mike linebacker, where there is little doubt who will start for the Hokies, the lack of experience against the triple option leads to unknowns. Despite his status as a r-senior, Chase Williams did not play much before this season. And while he has played well the first three weeks and continues to improve, he will have his hands full.

“Chase has really played well,” Foster said. “He’s playing his best football, obviously. Andrew (Motuapuaka) is a guy that keeps getting better. I like how he’s practicing. I’d like to have been able to get him in some games a little bit. It just hasn’t worked out.

“But Chase, I think he understands. He’s been here long enough to have seen it and practiced it and repped it that he knows what the expectations of the mike backer in this game. He’s going to need some big-boy pads when it’s all said and done.”