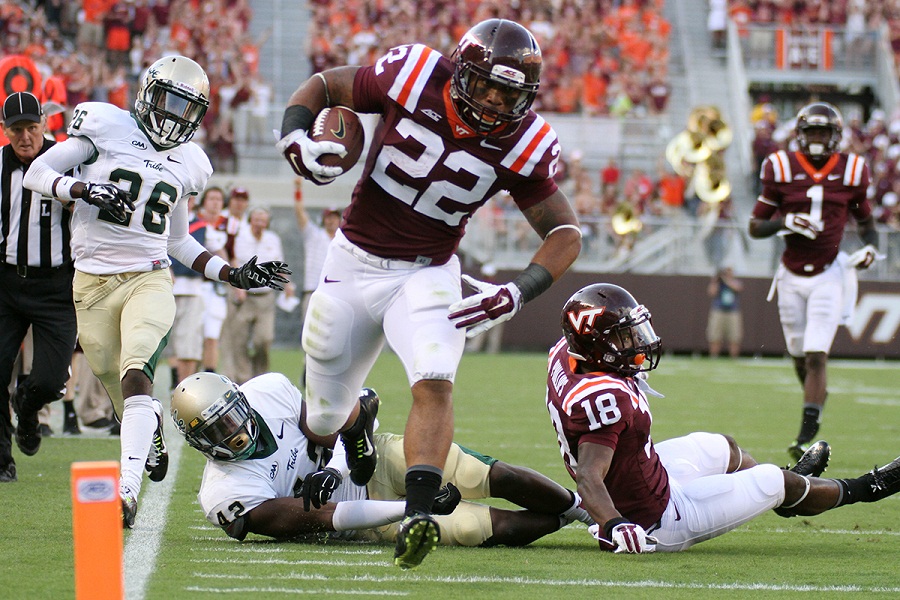 BLACKSBURG, Va. – Frank Beamer and his coaching staff were looking forward to Saturday’s contest with William & Mary, as they do every season opener, not just because it means a return to meaningful football, but because it offers an opportunity to answer questions.

Saturday night, after Tech’s 34-9 victory over the Tribe, there is a better idea of what the Hokies have to offer.  J.C. Coleman started Saturday as Tech’s number one running back. That may not be the case for much longer.

Despite receiving the lion’s share of the opportunities early on, the junior running back failed to do anything noteworthy with them. He ran for 20 yards on 10 carries and caught two passes but lost one yard. He ran for a touchdown early in the fourth quarter, filling a Walmart-sized hole along the left side from two yards out.

While Coleman’s stock dropped, a pair of true freshman running backs threw their name in contention for the top job.

Highlighted by a 39-yard touchdown run late in the third quarter, Shai McKenzie led all Tech running backs with 106 yards on nine carries. McKenzie was the first Tech running back to eclipse the century mark since Trey Edmunds — who played on special teams but didn’t record a carry — did so last season against Marshall.

Marshawn Williams looked good as well, using his big build to run through defenders. He ran 12 times for 41 yards, each of them being well earned.

“Number one, I think they are really good backs,” Beamer said. “Number two, they are very straight ahead (runners). You get tired of tackling those guys all day long. And then number three, I think our offensive line is better. We still have a ways to go, but we have some toughness in there, and some guys that I think they will only get better.”

Another pair of true freshmen, this time at wide receiver, proved that they have the potential to jumpstart an offense that lacked explosiveness and consistency for some of the last few years.

Isaiah Ford caught four passes for 43 yards, including a touchdown in the first quarter when quarterback Michael Brewer bought himself time with his feet and then found Ford all alone for a 12-yard score.

“They had fun, which is pretty important as freshmen your first time playing,” said Willie Byrn of Ford and Phillips. Byrn had three catches for 49 yards.

“They had been playing so well all camp that I didn’t think (the moment) was going to swallow them, that they were going to choke,” Bryn said. “I thought that they may have had some hiccups along the way, but when I first saw Cam come in and he was on my side, I’d always let him know the call and what it is and what he had, but he was just right there giving me a thumbs up like he already knew it.”

It was redshirt freshman tight end Bucky Hodges whose six catches led all receivers. The 6-foot-6 former quarterback used his unique skillset to take advantage of mismatches across the field.

On third-and-goal, after the Hokies started a drive on the William & Mary two-yard line, but couldn’t punch it in, Hodges came down with an eight-yard grab. Brewer’s lob to the back left corner of the South endzone was a little short and looked like it was going to be intercepted, but a defensive bobble and Hodges’ concentration secured the score.

The Tech offense, led by Brewer, who made very few poor decisions in his first start since high school, marched straight down the field on its opening possession, converted four times on third down, and scored a touchdown.

The Texas Tech graduate finished the afternoon 23-30 for 251 yards and two touchdowns as he spread the ball around to nine different receivers.

“That’s really important,” Isaiah Ford said about using multiple options in the passing game, “so they can’t key on one specific person. If everybody is getting the ball then everyone is getting open and doing his job.

Brewer’s one interception was one of a couple passes deflected at the line of scrimmage, something that because of his 6-foot frame and his low angled release may be a persisting issue.

On the other side of the ball, Tech’s defense made some adjustments during halftime, starting linebacker Chase Williams said, and it showed.

The Hokies allowed 128 yards in the first half, including a couple big plays. The Tribe finished with 193 total yards of offense.

“(William & Mary) came out and showed us some things that we hadn’t seen before on film,” Williams said. “They had some good guys that were in the backfield, but we made a couple adjustments and I feel like we came out in the second half and executed.”

Williams clobbered Tribe quarterback Steve Cluley, one of four Tech sacks on the day, midway through the second quarter to force a fumble. Derek DiNardo, who made the start at whip, picked up the loose ball and returned it 45 yards.  Forty seven yards would have meant paydirt, but the short field led to the Brewer-Hodges touchdown connection.

Yet another fresh face left a positive first impression on Frank Beamer and company. Place kicker Joey Slye was originally supposed to handle all long field goals, but found out Thursday he kicked well enough to earn all place kicking responsibilities.  He is the first placekicker to start as a freshman in Blacksburg since Carter Warley did it in 2000.

Slye connected from 20 and 27 yards when Tech drives stalled in the red zone and successfully converted all four extra points. He kicked off five of the seven times as well, splitting those duties with Mitchell Ludwig.

“The kick off, yeah there was a lot of nerves,” Slye said, but he put those to rest after making the tackle as well.

In total, nine of the 17 true freshmen that dressed played on Saturday.

“It was a real game,” Hodges said. “We got to get a shot at Lane Stadium. William & Mary, they were still a good team and they fought to the end. I think it gives us some confidence going into Columbus, Ohio next week.” 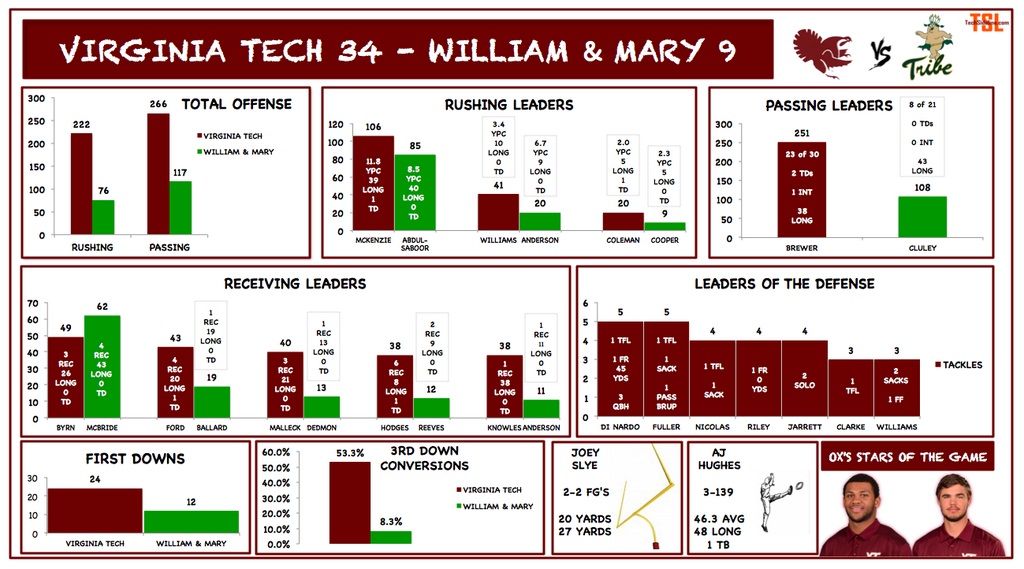