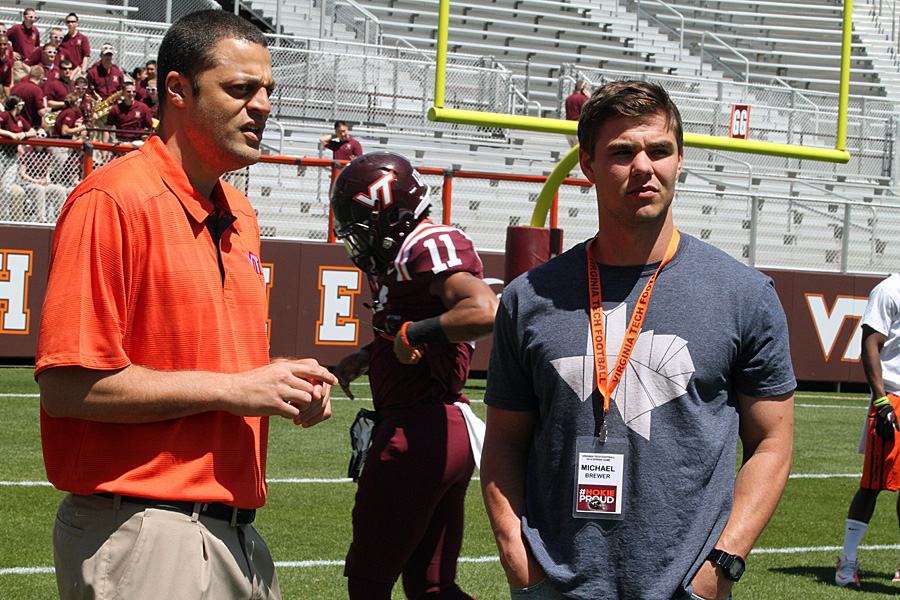 GREENSBORO, N.C. — Of all the story lines that surround Virginia Tech heading into the football season, atop the list sits the quarterback battle.

Popular opinion has 6-foot, 202 pound transfer Michael Brewer leading the list comprised of Mark Leal, Brenden Motley, Andrew Ford and Chris Durkin, but all have been given a chance to see what they can bring to the offense.

“That’s what has been so crazy about this summer,” receiver Willie Byrn said. We’ve had to work with every single guy from the senior down to the freshman.”

Brewer, who graduated from Texas Tech in May, has two years of NCAA eligibility left and has been throwing with receivers and learning the playbook all summer

“Biggest and best impression is how competitive he is,” Byrn said. “He doesn’t like to lose one rep in seven-on-seven, and you love to see that. You have some guys naturally, it’s the summer, it’s toward the end of the workout, and if you get an incompletion, it’s an incompletion, okay, whatever. He is mad if you don’t compete for the ball. And if the defense breaks it up and they talk about it, he comes right back at them, he audibles the play, and he does whatever he needs to do to win.”

Brewer has been participating in seven-on-seven drills as well as offseason workouts with the team, a time in which he’s proven to players that he’s already garnered an understanding for the playbook.

Byrn said of Brewer, “Now, it’s a completely different animal when you get out in the field and you have to adjust to different looks and it’s a full on 11-on-11. But from what it seems, we don’t have to slow down at all for him.”

Brewer played in 13 games and attempted 58 passes at Texas Tech, but he brings as much real game experience as any of the other Hokies in the mix. Fitting in isn’t an issue either apparently, as he’s thrown himself into the locker room makeup.

“He’s already in the circles. He goes fishing every day, so he and Charley Meyer are the fishing boys, [Caleb] Farris and all them. He says he’s going to take me hunting. I’m still waiting for that to happen. He’s told me some insane stories about hunting and stuff. It makes me want to hunt.

There was one about being surrounded by wild boars that made Byrn wonder if all the newcomer’s stories were true.

“But he’s already in the team,” Byrn added. “What’s interesting is he never really had … when someone first transfers they are usually timid and checking out there place and where they fit in. He just kind of threw himself in. He was just confident that he was going to fit in, and he did.“

Tech’s defensive representative at the Media Days, third-team All-ACC tackle Luther Maddy, has no inclination to go hunting or fishing with Brewer.

“I don’t go fishing,” Maddy said, laughing. “I just play football. That’s all I do.”

But even to a non-fishing defensive lineman such as Maddy, Brewer’s quick adherence to the team was evident.

“He’s a real good guy. He goes fishing with the offensive lineman, those guys, I’ve seen him at TOTS one time downtown, me and him just chilling. He’s a real cool guy.”