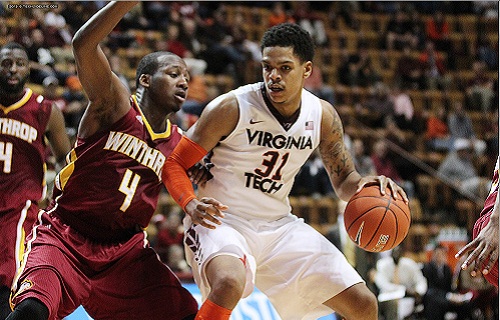 Virginia Tech got a career-high 34 points from Jarell Eddie and beat Winthrop 81-63 in Cassell Coliseum on Tuesday night.  The Hokies are now 6-3 on the season, while the Eagles dropped to 5-2.

Eddie played an extremely efficient game offensively.  He was 13-of-18 from the field, 6-of-8 from three-point range, and he also made both of his free throws while pulling down seven rebounds in 37 minutes.

The big game from Eddie was needed, as the Hokies were without Adam Smith (calf) and Ben Emelogu (concussion).  They are Tech’s second and third leading scorers, but fortunately their absence was not felt in the win-loss column on Tuesday night.

The Hokies shot 60.4% from the field for the game, including a staggering 70% in the second half.  They went 9-of-20 from three-point range as a team, and they outrebounded a much smaller Winthrop team 37-22.

Tech also got good performances from a few other players…

Cadarian Raines finally got back into the action, recording eight points and four rebounds in 15 minutes.

Virginia Tech will play their first ACC game of the season on Sunday when they take on Miami in Coral Gables.  Tipoff is scheduled for 12:30pm, and the game will be televised by ESPNU.