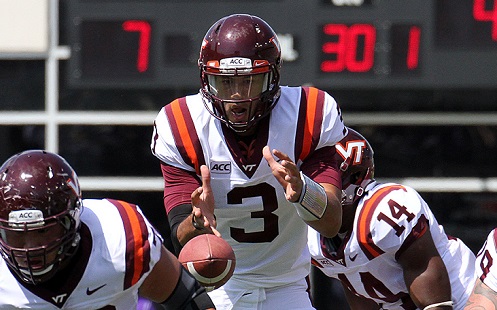 Turnover #1 – Leading 10-7 and driving at the BC 45 in the third quarter, Thomas put the ball on the money to Demitri Knowles on a crossing pattern.  For whatever reason, Knowles only threw one hand up at the ball, it was deflected and then intercepted.  BC returned it to the Tech 45, and tacked on a field goal to tie the game at 10.

Turnover #2 – Leading 17-10 and facing second and 11 at their own 20, Thomas dropped back after a playfake, hung in the pocket a little too long, and was sacked from behind.  It was a coverage sack, but Thomas fumbled the ball away, and BC recovered on the Tech 17.  The Eagles scored a touchdown to tie the game at 17.

Turnover #3 – With the game tied at 20, Thomas faced third and five from his own 20.  He was pressured up the middle and tried to throw the ball away, but he inexplicably floated a pass just past the line of scrimmage that was intercepted and returned for a touchdown by Kevin Pierre-Louis.  27-20 BC.

Turnover #4 – Trailing 34-27 with just under 1:30 left, Thomas scrambled on a third and 10 play from his own 28.  He picked up five yards, but he was carrying the ball away from his body and fumbled when hit from behind.  That turnover ended the game.

The first interception was certainly not the fault of Tech’s r-senior quarterback.  However, the other three came from Thomas either waiting too long in the pocket, making a poor decision, or carrying the ball away from his body in a critical situation.

Through his last two games, Thomas has a total of eight turnovers, and Virginia Tech is 0-2 in those games.  In the previous three games against Georgia Tech, UNC and Pitt, he had zero turnovers, and the Hokies won all three of those games.

Through the first half and for part of the second half, Thomas played very well.  He was 24-of-41 for a career-high 391 yards, and he threw touchdown passes to Kalvin Cline and Trey Edmunds .  However, that sudden string of turnovers in the second half played a big role in Tech’s loss.

Tech outgained BC 446 to 286.  It was VT’s first 400 yard game against a 1-A opponent this season.  Joshua Stanford had a huge game, catching six passes for a career-high 171 yards.  Willie Byrn added five catches for 49 yards, while Trey Edmunds had 4 receptions for 42 yards and a touchdown.  Edmunds also had a long touchdown reception (correctly) called back for a hold.

BC tailback Andre Williams, the fifth-leading rusher in the country, piled up 166 yards and two touchdowns on 33 carries, averaging exactly five yards per carry.  The Tech defense held him in check for most of the day, but did surrender touchdown runs of 62 yards and 19 yards.

BC quarterback Chase Rettig was a pedestrian 11-of-14 for 93 yards, but the r-senior who is playing under his fourth offensive coordinator in five years did what he knew he had to do for his team to win: he did not commit a single turnover.

For the second consecutive week, the Hokies only punted three times, and they completely trounced their opponent in total yardage.  However, they were undone in both games by turnovers.  At this point, it’s obvious that turnovers will make or break this football team each and every week.

Virginia Tech returns to action next Saturday when they take on Miami on the road.  Kickoff time and TV coverage will be announced tomorrow.