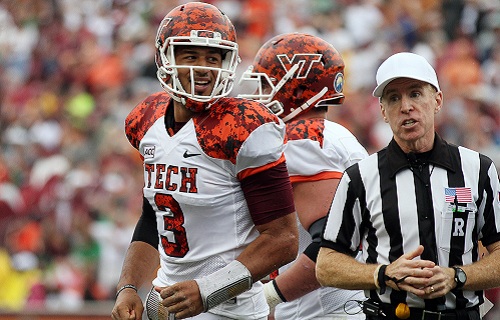 On wearing a walking boot

Nothing really. I got a sprain on my foot in the first quarter. They’re just doing it to take pressure off of it.

On whether he’s had lingering issues with the sprain

Oh, no it’s fine. It’s still the same thing with my ab, but other than that I’m good.

On whether he has concerns about his injuries

No, I’m good. Everything I’ve done has been to myself. Hasn’t been anybody doing anything to me. I just planted funny on my foot which made it pop. Then my ab, I think I overstretched or something. Maybe I’m getting old.

On whether he enjoys the challenge of playing through the pain

That’s really my first time really having to do something to that effect. Every time I threw the ball, it just kind of hurt. I think I was just locked in. I didn’t get many physical reps, I had everything be mental during practice. So when I got out there, I was able to see everything. I’ve kind of now got a new approach to being able to do everything mentally, but hopefully doing a lot of things physically as well.

On his current weight

On whether he meant to lose that much weight

No, they really wanted me around 250. I guess they said they wanted me to lose 10. The way I was eating, the things I was eating. I was eating healthy, exercising I guess, it just kept coming off. And so it didn’t bother me that I was 245. [I’m] still healthy, still feel strong, still got all my strength that I had before. Just not, I guess, as chubby.

On his focus after the GT game

I don’t think it changes your mind frame going into any game. I think it’s nice to have the first ACC win underneath our belt. We did the same thing last year and we kind of fell apart. We’ve just got to keep building on what we have. I know for me, after we won the game I was happy about it. But now it’s time to move forward and look towards North Carolina and keep stepping and getting better. If we keep getting better as the year goes on we’ll end up where we want to be.

I know we have a stellar defense here. Tops in the country. But offensively, I think it means that we’ve just got to check out and see a little bit of what ECU did.  But we’ ve got to stay within ourselves and not try to do anything too crazy. Keep doing what we do, keep getting better. I think it just means we have some opportunities to have big plays and some opportunities to put together long scoring drives and keep doing things that we’ve been working on. Once we get chances to score, [we need to] end up scoring.

Yeah, you definitely remember games. It was a tough one for us. It was probably one of our better outings on offense. We didn’t run the ball well, but we were able to throw it pretty well. The defense had their struggles. But we had our struggles last year, the defense had their struggles last year. It’s just kind of the talk of consistency and that’s probably why we weren’t very good last year. Last year is of out of the way. We remember the loss. We don’t want to take another loss like that again. And I think it’s going to help motivate us, get us better for this week.

On having the weapons to compete in a shoot out

Yeah, I think we can. As our confidence is rising I think we’re going to be able to do so. These guys have gotten a lot better in the past two weeks against ECU, Marshall and this past week against Georgia Tech. I think that their confidence is built. They kind of understand how the offense is flowing now and now we can start throwing a few more things at them as well. Like I’ve been saying once these guys get their confidence they’re going to be very good and big weapons for us and they’re starting to do so now.

Well, me and him have kind of been rehabbing together, I guess the past couple days. He’s doing fine. He’s still limping around, but hopefully by Wednesday or Thursday he’ll start to come around and be ok. Just like anything it takes time. He’s a fighter just like anybody else. He wants to be on the field very badly against North Carolina just like anybody else would. He’s doing everything he can to get there.

On spreading the ball around

Like I said against Alabama, it was kind of a game plan thing. We thought we had the matchup to Demitri against Alabama. We can move the ball around to anybody to be honest. However, the play pans out, just got to get through your progressions, just hit the first one that’s open. Guys have just been playing well. They’re getting to their spots and we’re starting to look pretty good in the passing game.

We don’t really care about that. We’re just trying to go out and handle our business every week. For me, I don’t mind flying underneath the radar or however you may ask. You can put Miami up front, you can put Georgia Tech up front, Carolina up front. Doesn’t matter to me. We’re going to come out the same week and prepare the same way and just try to get better. Any week in college football is a special week for somebody.

On whether this season feels more normal than last season

It’s definitely a start. Starting off 4-1 is kind of starting the right way to what I wanted to do when I came back. It can’t stop now. It’s got to keep going forward to be as successful as the way I pictured it.

On the difference between last year and this year

I think when things got tough last year, we just started becoming individuals. This year we’ve stuck together as a group and as a team. When things get tough we’ve been able to rely on each other to get out of jams. We’ve been able to do so this far. That’s just the big reasons that we’re all so close, that we all understand each other and we’re all willing to put it on the line for each other. 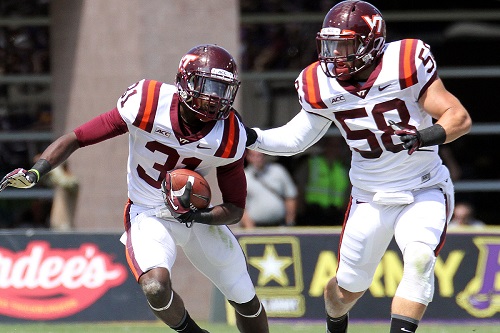 On whether he’s always had a nose for the ball

On whether he can make it look easy

No, not really. When I first got here it was very difficult just to understand everything and be able to process it all. Over the course of time Coach Gray’s done a fantastic job teaching me. And my cornerback brothers, they do a fantastic job as well. It’s taken me a little bit of time, it’s gradually getting there. I’m learning a lot from it.

On the return of Antone Exum

Honestly, I don’t know. We haven’t really talked about that. We’re all waiting for Antone to come back, he’s a great player. He’s definitely helped out when he’s been out with me and Kendall, and just learning from him and learning from the other defensive backs. We have not talked about what’s going to happen yet.

On whether UNC’s loss to ECU changes VT’s mindset

Not really. We haven’t watched film on them yet (editor’s note: Facyson made that comment on Monday, before practice.  VT has certainly watched film on UNC by now). I know personally I didn’t watch the game. It doesn’t change our mindset, we have to treat it like another game. The next game is always the most important. We can’t have the mindset that we beat the team that beat North Carolina. We can’t really have that mindset or else we’ll lose.

I feel really prepared. We don’t make excuses with the short week of Georgia Tech. We just have to go out there and practice extra hard and go out there and read our keys and be right. That’s all we have to do is just execute, and we did and we won that game.  We come out here for North Carolina and we’re going to do the same thing in practice that we do every week. We’re going to pay attention to our keys and really learn the offense and let our defense do the work. Our schemes are always great. Coach Foster and Coach Gray do a fantastic job. We’re going to come out here just focused and ready to work.

On tying the freshman INT record

It’s an honor. I wanted to come in and here and make an impact from the get go. So far I’ve done that. Any way I can help my team, I’ll do that. My personal goal is just to help out my team as much as possible. Having the four interceptions and being tied for the most in freshman history, that’s a great thing, but it’s not all about me. As long as we come out with the win, that’s a great feeling. If I had no interceptions and we still come out with the win, that’s the best feeling. I don’t really harp on the interceptions too much. I just move on to the next game and try to do my best.

On the reception he received when back home in Georgia

It was a great feeling. I had all my friends and my family up in the stands. Coming back, my eyes got so wide. Just being able to be back was a great feeling. The next day I went back to my high school and I went and I saw all my teachers and saw all my friends. They were so happy to see me. I went to support my high school team, as they were playing one of our rivals. It was an amazing feeling. I can’t even describe the feeling actually. Not being home for so long, you go back and you try to embrace everything. It makes you appreciate things so much more.

On what a win over UNC would mean