For the first time since 1951, Virginia Tech lost seven consecutive games. The latest came on Saturday in Durham where, despite taking an early lead at Duke, the Hokies looked lifeless offensively in the 24-7 loss.

“We’ve got to control the ball better, earn first downs. And we just fight and claw defensively to hang on, and when we don’t get some help, it just makes it too much to overcome.”

On Tech’s second play from scrimmage, Grant Wells hit Da’Wain Lofton on a 53-yard touchdown pass down the sideline. But from that point forward, the Hokies punted six times, missed a field goal and threw an interception, and they never looked threatening.

Through ten games, Virginia Tech has led in all but one contest: Miami. The total time with the lead: 259:39. That’s 154:49 in the seven losses not counting the Hurricanes, an average of 22 minutes per game.

According to my calculations, Virginia Tech has led an average of 22 minutes in its seven losses this year (never led vs. Miami).

So, while the Hokies have been in almost every contest they’ve played, the program continues to strikeout when it comes to finishing games. That’s why Virginia Tech is 2-8 for the first time since 1992, when it finished 2-8-1.

“I expect us to play better,” Pry said. “I do. … We’ve got to build depth. We’ve got some good players. We don’t have enough of them. A couple more good players can make a difference in the ballgame.

“We have to be better, just fundamentally, ground-zero stuff. … There are certain things that we are coaching and teaching and doing that as we move forward should be part of who we are, and you’re not coaching those things anymore. Those are 100-level items that, after a year or two in the system and in the program, the guys understand, and you can start working on some other things.”

Five times the group went three-and-out, which left the defense on the field for the majority of the game. Duke controlled the time of possession 38:59 to 21:01 and took advantage of Tech’s tired legs.

“They kept us off-balance,” Pry said of the Blue Devils. “They ran the ball well enough to stay on schedule and then mixed in the play action. I thought they did a nice job really taking a look at what we’re doing.

“We needed to be more patient and not show our looks. Anytime you’re pressuring, if they ID it, it’s not good. We did a poor job of that today.”

Duke racked up 427 yards of total offense (5.9 yards per play) and was methodical in possession. Two of its three touchdown drives took at least eight plays and at least five minutes. Tech simply couldn’t get off the field.

The Blue Devils were two-of-three on fourth down conversions, too. One pickup was in the second quarter when Tech led 7-3. At the VT 37, Mike Elko & Co. rolled the dice. The result was a 13-yard completion on the near sideline to Jontavis Robinson, who had acres of space. On the next play, Duke quarterback Riley Leonard hit Nicky Dalmolin for a 24-yard touchdown.

At the start of the fourth quarter, the Blue Devils gambled again. And they converted once more – this time on an 18-yard pass from Leonard to a wide-open Jordan Moore. Duke found Robinson on the next play for a touchdown.

Two instances where the Hokies could’ve gotten off the field and given their defense a rest, they didn’t.

“I’m not going to lie, it is frustrating, it is hard, but we’ve just got to fight through it,” Tech linebacker Keli Lawson said. “Adversity comes with this sport.”

Even when the Virginia Tech offense had opportunities, it couldn’t convert. Up 7-0, Mansoor Delane intercepted a pass from Leonard at the VT two-yard line in the second quarter. The result: a three-and-out.

Moreover, at the end of the half, the Hokies drove 40 yards in seven plays, setting up a 50-yard field goal. However, Will Ross, who was 8-of-10 on the year and missed his last two attempts, was benched for true freshman John Love. Pry said the staff wanted to give Love an opportunity and wasn’t happy with Ross missing two extra points recently. But Love’s attempt fell a few yards short, sending Tech into the locker room trailing 10-7.

And when the Hokies trailed by 10 in the third quarter and were moving the ball, they stalled. On a third-and-seven from the Duke 24, Wells picked up three yards on a designed quarterback draw. But Tech went for it on fourth-and-four, lobbing it to Kaleb Smith in double coverage in the end zone, where it fell incomplete. The set-up and execution on an obvious four-down series just wasn’t there.

Duke continued to move the ball and churn the clock, and despite the Hokies turning the ball over just once – a tipped pass that was intercepted – and not recording a penalty for the first time since 1987, they were never in the game. It wasn’t anywhere close to complementary football.

“We’ve obviously got to move the ball better,” Pry said. “I think everybody on the staff believed we had a good plan going into it. And we just didn’t get it done. We’ve got to be able to move the ball more effectively. And we’ve got to look at what we’re doing.

“You’ve invested a lot of time in being a certain style of offense, and when it’s not working and you have to get creative, how good can you be at what you’re doing?”

Now, the Hokies turn to Liberty, who lost to UConn on Saturday. Only the Flames and the rivalry game vs. Virginia remain. Even though the season hasn’t gone the way anyone wanted, the players and staff want to play for pride against their Commonwealth foes.

“We have nothing to lose these last few games of the season, so we have to just put it all on the line and write our own story,” Lawson said. “How do we want to be remembered?” 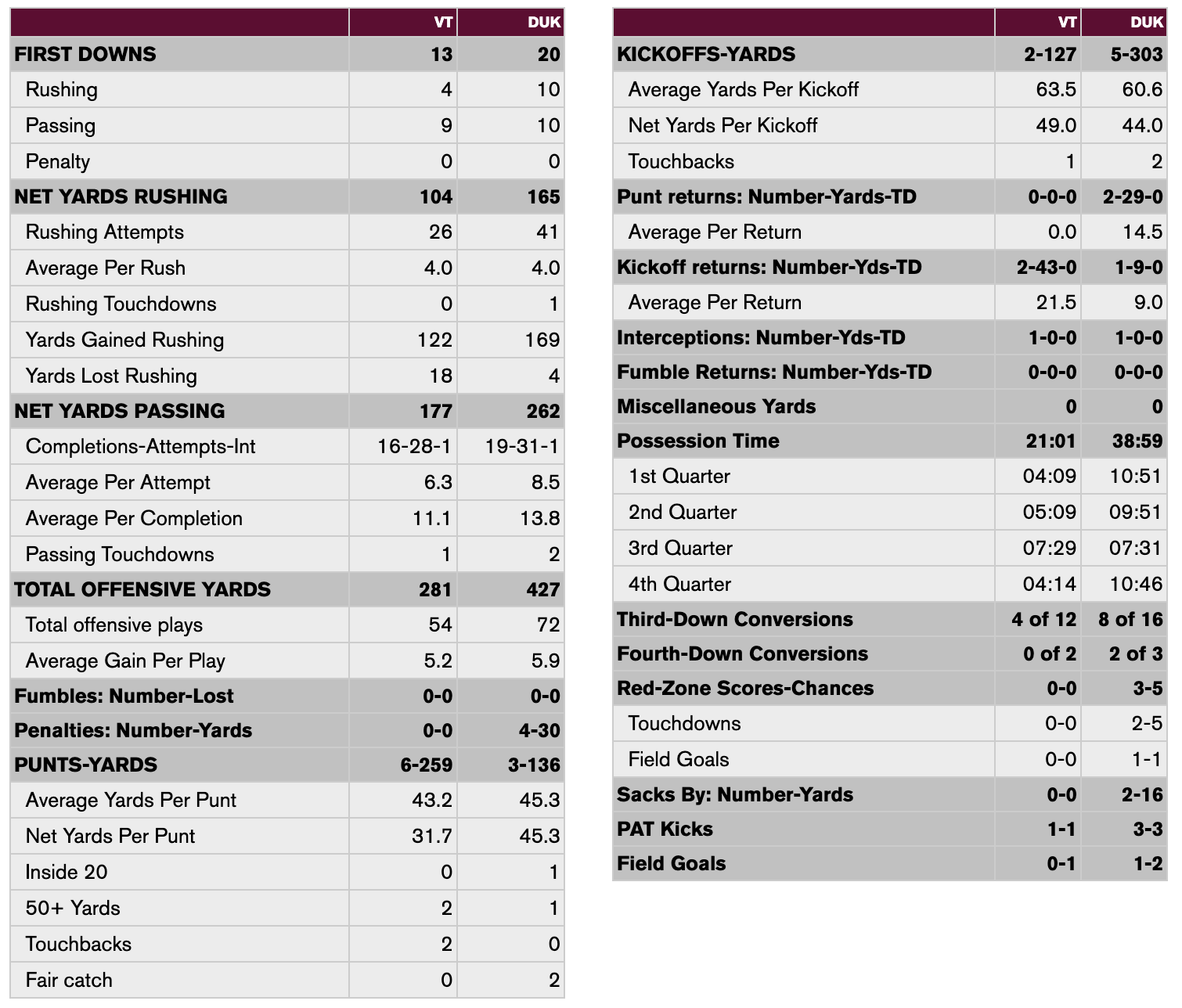 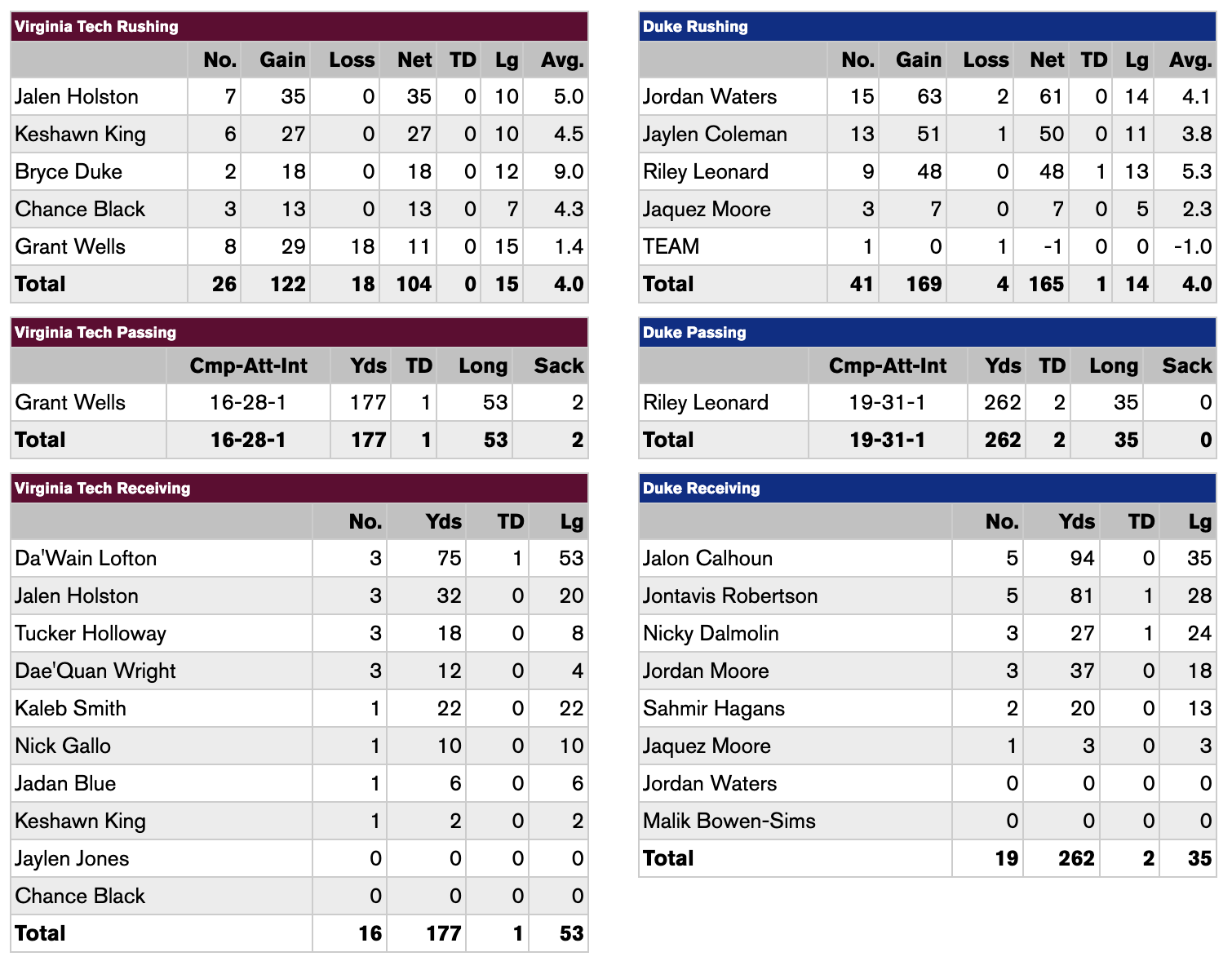 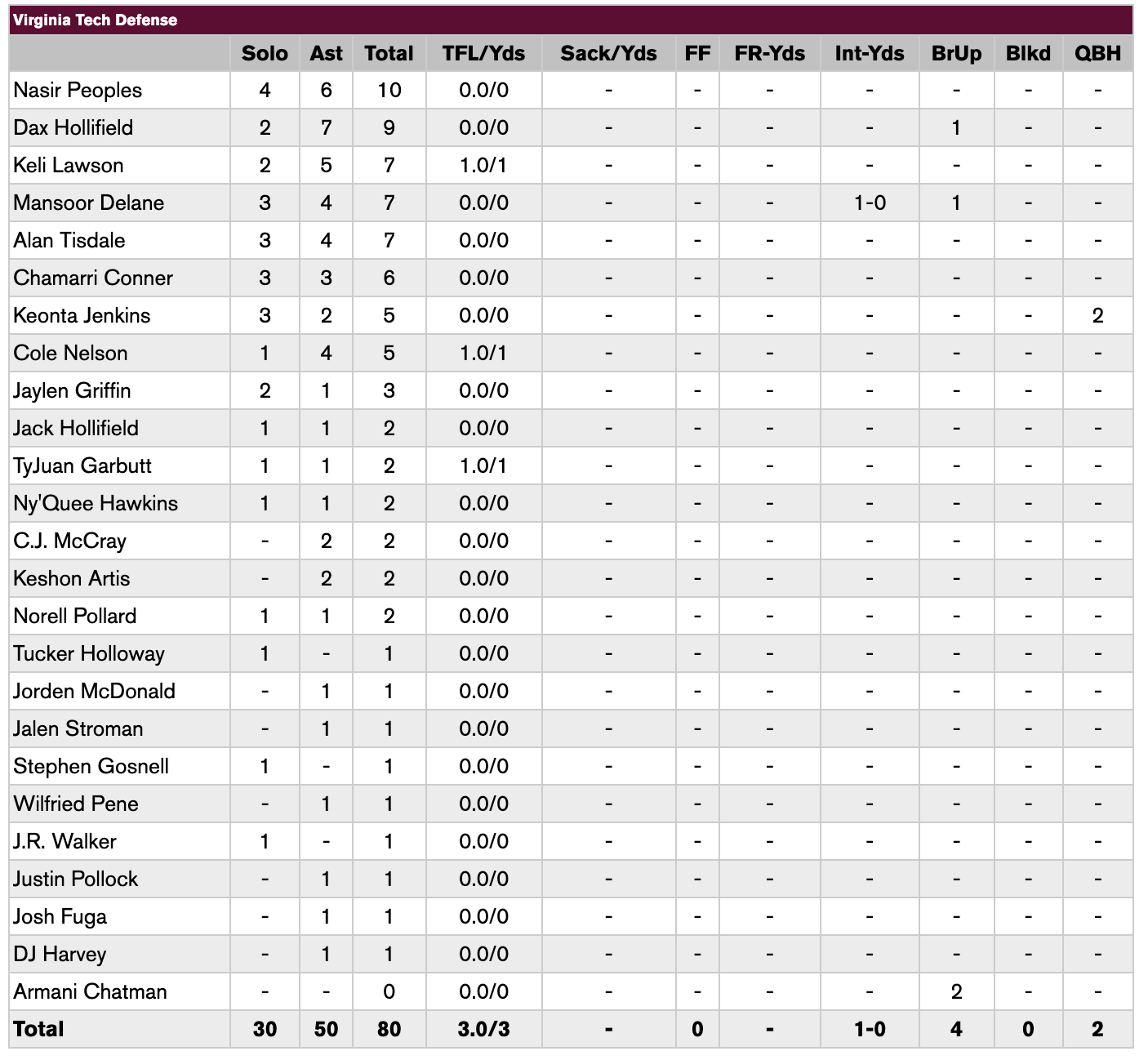