Success on the diamond has translated to success on the recruiting trail for the Virginia Tech softball program and head coach Pete D’Amour.

Nine players in the class of 2023 signed letters of intent with the Hokies on Wednesday and Extra Innings Softball ranks the Hokies recruiting effort 12th in the country. That is the highest recruiting ranking ever for a Virginia Tech softball team and puts the Hokies in some rarified air among some traditional softball powers. 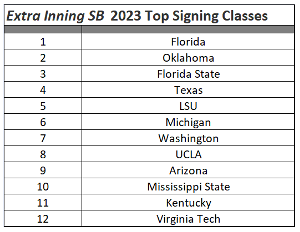 A major reasoning for the high ranking is that five of Tech’s signees are ranked 63rd or higher in Extra Innings Softball’s Extra Elite 100. Only Florida and Oklahoma signed more top-100 prospects.

Here’s a list of the 2023 Virginia Tech softball signees (positions listed are high school positions and may change at the college level):

As one would expect, D’Amour is pleased with the Hokies’ recruiting haul.

“Our main objective when we put together recruiting classes remains the same,” D’Amour told Tech Sideline. “We look for power, pitching and athletes that can hit for power and play defense. We feel like we’ve met that in this class and then some.

“These ladies want to be in Blacksburg. I’m confident that they will assimilate into our program quickly. I’m thankful to all of them for believing in our program.”

Here’s a brief overview of each commit, in alphabetical order:

Blackwell helped lead her high school (Roncalli) to an Indiana State Championship and a 33-0 record by hitting .523 with 57 hits, 53 runs scored, and 33 stolen bases. Her local newspaper called her “a game-changer” and Hokie fans hope she can do the same in Blacksburg.

Blackwell been described by Extra Innings as “a lockdown corner outfielder that can shrink the OF on any hitter with her speed. She wreaks havoc at the plate and on the bases.” She plays travel ball for the Beverly Bandits Premier – Conroy where she was named a PGF All-American Futures selection this past season.

Blackwell picked the Hokies over Indiana, Purdue and Southern Illinois at Carbondale.

Chatfield joined teammate Annika Rohs in making the Virginia Class 5 All-State Softball Team. She plays travel ball for the Tri-State Thunder Gold and was named to the Alliance Fastpitch All-Tournament Team in August after hitting .538. That earned her an honorable mention spot on Extra Innings 2022 All-Summer Team.

A left-handed hitting corner infielder, LeGette has twice been named the Miami Herald’s Player of the Year. She has played varsity softball since the seventh grade and played in 26 games that year. Last season, LeGette led her team with a .471 batting average to go along with 27 RBI, 17 runs, eight doubles, three home runs and 20 stolen bases.

“Softball is honestly my life,” LeGette told the Miami Herald after her last award.  “I know that’s cheesy, but I revolve my whole schedule around softball. … Going to the gym, hitting balls, throwing. It’s just something that’s been part of my life for a long time, and I can’t imagine life without it.”

Masters has earned the nickname “the Boone Blaster” due to her propensity for blasting home runs. She was named the Johnson City Press Player of the Year twice and set a state record in Tennessee with 25 home runs while batting .443 with 74 RBIs.

She plays travel ball for Mojo-Lunsford. Her travel ball coach, Mike Lunsford, described her as “the epitome of power, an intimidating force in the batter’s box whose exit velocity is in the lower 90s.”

“On the defensive side of the ball, she gives us cat-like reflexes flashing the leather on the hot corner,” Lunsford said, “with a throwing velocity in the 70’s coupled with a softball IQ in the top 99 percent.”

Mazzarone’s local newspaper called the left-hander “one of the best pitchers in North Carolina.” During her junior year, she posted a 24-1 record and led her team to the North Carolina semifinals. She had 348 strikeouts to lead the state with a 0.31 ERA and tossed 14 shutouts, six no-hitters and had a perfect game. Extra Innings wrote that she can “mix her speeds effectively in the circle.”

Mazzarone is also an offensive threat. She hits left-handed and compiled a .586 batting average and a .670 on-base percentage with seven home runs, 12 doubles and had 34 RBIs in 2022.

McManus is a right-handed pitcher who finished her junior year with an ERA under 1.00 and an opponent’s batting average of .123. As a result, she earned a spot on the North Carolina Softball Coaches Association All-State Team.

McManus played for the Carolina Cardinals for travel ball and her coach described her as having a velocity “in the upper 60s with a high, hard spin count.”

McNelly plays shortstop and centerfield and hit 16 home runs last year as a high school junior (including five in one week). She also drove in 43 runs and five bases, and she’s a dual-sport athlete – in basketball, she earned All-State honors.

McNelly plays travel ball for Lady Dukes and her coach told Extra Innings she is a “do-it-all player with an above average arm, plus power and speed and great all-around athlete tools. She has a cannon for an arm and throws runners out from center field and makes it look easy.”

Rohs is a two-sport athlete who earned All-State honors in softball and helped the Woodgrove basketball team to the state championship game.

Her travel ball coach told Extra Innings that she is “the softball version of Ozzie Smith. This young lady is electric at the shortstop position. … Her quick first step allows her to play the game with intelligence to match her skills. … [She] shows her leadership skills on and off the field, and Virginia Tech is getting the total package with Annika.”

Rohs landed at Tech over offers from Delaware and Robert Morris.

Extra Innings ranked Yaeger as the No. 3 catcher in the 2023 class last year.

“[Yaeger is] a very consistent presence behind the plate with her strong ability to be a wall and throw runners out as well as pick them off at any base,” Extra Innings said. “She has great framing capabilities and is the catcher every pitcher wants behind the plate.”

Yaeger plays for Hotshots Premier National – Nelson team and made the Extra Inning Softball 16U All-Summer Team last year after she batted .350 with an on-base percentage of .421. She was chosen as a starter for the PGF Futures All-American Game (underclass) and was picked to play in the TCS Power Pool Showcase.

Her coach said she has explosive power, which has led to the term “Yaeger Bombs.” She fielded offers from Ole Miss, Purdue, UCF, Virginia and Villanova, ultimately choosing the Hokies.