In an almost storybook setting on Senior Day, several Hokies honorees played key roles in No. 3 Virginia Tech’s 7-4 win over Louisville on Sunday.

The victory, highlighted by four unanswered runs in the last four innings, gave the Hokies an ACC series sweep over the Cardinals – their seventh series win of the year and their fifth conference sweep of the season.

Combined with Duke’s Saturday’s loss to Syracuse, the Hokies now find themselves in the driver’s seat for the ACC regular season title with only a series at Boston College remaining on the regular season schedule. Two VT wins in Boston will assure the program of the top seed in the ACC Tournament. 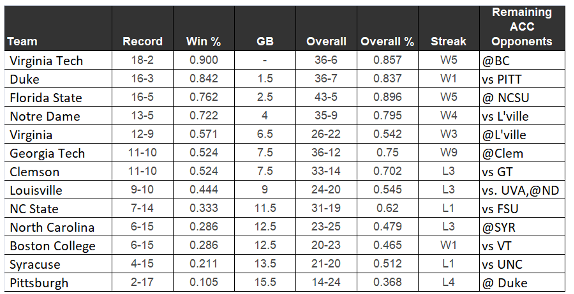 Sunday’s 7-4 win followed a 3-0 victory on Saturday and a 4-3 thriller on Friday night.

Keely Rochard pitched six innings and surrendered only one earned run in game three, striking out seven. Mackenzie Lawter blasted a towering home run off the camera tower to tie the game in the fourth and Ally Repko drove in the two go-ahead runs in the fifth with a pinch hit double.

All three were honored in post game ceremonies along with Kayleigh Addington, Alexa Milius and Darby Trull, who went one-for-two in the game and scored a run.

It was an emotional day for the Hokies, and head coach Pete D’Amour admitted he got caught up in the moment.

“I’m seen as not having a ton of emotion on the softball field,” D’Amour shared with Tech Sideline. “It was very hard for me to keep my emotions in check, especially at the end of the game. This senior class is extremely special to me. They’re the first class where the majority have played in my program for four years and they’ve done everything the coaches have asked of them.

“I’m fortunate to live a pretty good life with my family and I owe a lot of that good fortune to the ladies that played their last conference game in Blacksburg today.”

The emotions peaked in the top of the seventh when D’Amour replaced Rochard with freshman Emma Lemley. The Hokie fans quickly realized his plan and came to their feet to honor their All-American as Rochard hugged her coach, her catcher, Lawter, and Lemley. D’Amour said the move may have surprised Rochard, but it will go down as a special moment in a special season.

“We played just well enough this weekend to sweep a good Louisville team,” D’Amour said. “Keely and Emma were their usual selves. I feel like we always have a chance when they’re pitching.”

At the plate, the Hokies hit .329 for the three games (25-for-76) and only struck out eight times, but they stranded 21 runners on base. They scored eight earned runs in 9.1 innings off of Louisville ace Taylor Roby and held the Cardinal slugger hitless in 11 at bats.

“Offensively, I felt like everyone contributed something this weekend,” D’Amour said. “Our lineup is deep – one player doesn’t have to carry the load for us. At this point of the season, it’s all about wanting the next at bat, staying focused on defense, and challenging hitters.”

It appears the Hokies will move up in RPI this week as Alabama dropped a series to Texas A&M.  Projections now have the Hokies up to No. 2. The top eight teams will host during the NCAA Regional and Super Regionals and RPI is a heavy factor in the selection process.

The Hokies have some time off this week before heading to Boston for their final ACC regular season games that begins on Friday.