No. 5 Virginia Tech softball travels to Tallahassee this weekend to face No. 3 Florida State Seminoles in a huge ACC showdown. The Florida weather looks perfect for the weekend with temperatures in the low 70s.

Here is the schedule of games and broadcast information:

Here are the highlights of the Pittsburgh loss.

The loss to the Eagles was due to a masterful performance by BC senior hurler Peyton Schnackenberg, who threw an eight-inning one-hitter in the 2-0 win. In similar fashion, most experts expect a pitcher’s duel this weekend.

Florida State is third in the country in ERA (1.28) and the Hokies are sixth (1.44). The Seminoles’ Kathryn Sandercock leads the nation in wins without a loss (19) while Keely Rochard (12.4, 6th) and Emma Lemley (12.6, 3rd) are both in the top six in the nation in strikeouts per seven innings.

Here is a summary of the expected starters for the series:

Rochard had two excellent outings in last year’s meeting, picking up two wins versus FSU. She allowed just a single run on three hits in a 9-1 win and followed it up with a one-hit shutout in a 6-0 victory in the series finale. Overall, Rochard struck out 16 batters in 12 innings.

In FSU’s lone win, Sandercock pitched a complete game and shut down the Hokies, allowing only a single run on three hits while striking out nine. However, the Hokies did manage to score a couple of runs of off both her and Watson in game three. Still, the Hokies realize the challenge that they face.

“This feels like an old-fashioned softball game, Virginia Tech head coach Pete D’Amour commented on Packer and Durham on Thursday. “You have to try and manufacture runs against these types of pitchers.  That’s our task for the weekend.”

Before last year’s series, the Seminoles absolutely owned the Hokies on the diamond. FSU had won 13 straight games versus VT and 19 of the previous 20. Of course, the Hokies aren’t necessarily alone in those types of stats: FSU won six consecutive ACC Championships between 2014 and 2019.

Offensively, the Noles are led by two juniors and a pair of newcomers.

They are joined by two-way player Mack Leonard (.402), an Illinois State transfer who hit .425 and 10 home runs while posting a 11-4 record in the circle with the Redbirds.

Redshirt Freshman Michaela Edenfield (.354) arrived in Tallahassee with a big bat, crushing 15 home runs this season. She has been named ACC Player of the Week twice and D1 Softball named her the National Freshman of the Week in February.

There could be another potential showdown on the basepaths as the Noles don’t hesitate to run. FSU has stolen 65 stolen bases this season and only been thrown out 13 times. On the other hand, the Hokies have only allowed 13 base thefts all year, so something will have to give.

Another interesting stat: Florida State leads the nation in walks drawn with 172. Last weekend’s opponent, UCF, entered the series ranked second in the country in walks with 156, but Keely Rochard and Emma Lemley only issued three total walks in three games.

FSU also leads the country in fielding percentage (.986) having only committed 15 errors all season. However, it did commit two at No. 6 Florida on Wednesday night.

Coach D’Amour respects the Seminoles and their history, but also likes his squad.

“I’ve said it since I arrived at VT that Florida State is the gold standard of our league, and it has been for quite some time,” D’Amour told Tech Sideline. “They’re well coached, they don’t make mistakes, and they punish teams that do make mistakes.

“This weekend is another barometer to see where we stand at this point in the season. We’ve been playing well overall in all facets of the game, so I feel pretty good about competing against anyone in the country right now.”

Below are the tale of the tape and individual stats. 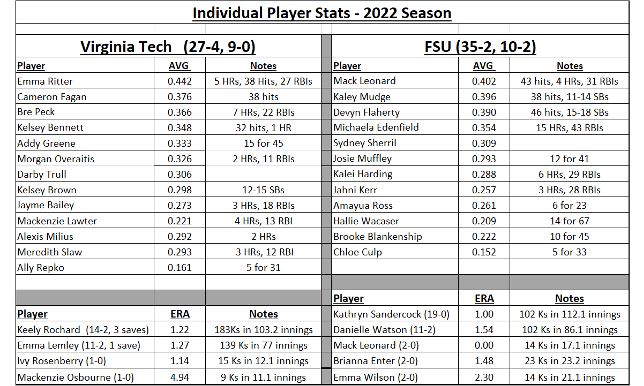