With 12.4 seconds to play in a one-point contest between Virginia Tech and NC State, Sean Pedulla stepped up to the free throw line. The freshman point guard from Edmond, Okla. had only four attempts from the stripe in his collegiate career, and he had never been in a situation like this.

Pedulla’s two free throws extended the Hokies’ lead to three, 62-59, over the Wolfpack, and the shots ended up being the late-game difference in the Hokies’ second ACC win of the season.

“Oh my god,” Virginia Tech head coach Mike Young said of Pedulla’s free throws after the game, breathing a sigh of relief. “Kid hadn’t been in that pressure-packed situation as a young person. That’s big, that’s huge. Get that thing to three, eight seconds to play.”

“They felt a little stressful, but I just kept thinking, ‘I’ve hit a thousand of these in my life, probably more,’ so I was ready for it,” Pedulla said. “I was spinning the ball, breathing [to relax].’ … But I just remembered how to stay calm, and I’ve been in that situation before. Maybe not on this scale, but just stay calm and trust your work ethic.”

Though Pedulla’s free throws were just two pebbles in a rock fight, they ended up pushing the Hokies to victory. In the last five minutes, Tech was 1-of-4 from the floor, 1-of-2 from three, 2-of-2 from the free throw line (Pedulla) and turned the ball over five times. Those giveaways all came in a span of 1:19 from 2:01-0:49, and four involved Nahiem Alleyne.

Mike Young & Co. (10-7, 2-4 ACC) didn’t play well towards the end, but they held on. That was the story of the contest: NC State (9-10, 2-6) climbed back into the game and had momentum, but Virginia Tech stuck to its defense, forced a few misses, hit shots when needed and prevailed.

“We were so bad in the second half,” Young said. “We look young and dumb, and we’re anything but that. Nahiem had a terrible turnover up seven, he travels with it down there. Justyn Mutts, who I thought was really good again, had a bad turnover, and that comes back to me.”

Young said afterwards that Tech needs to get better with finishing down the stretch, citing late breakdowns at Virginia and vs. Notre Dame. The Hokies led the Cavaliers by four with just over three minutes to play and were outscored 6-0, and they let the Irish tie Saturday’s game with 90 seconds to play before pulling away.

“We’ve got to handle those situations better,” Young said. “I trust my team. We’ve been in a number of pressure-packed games. We’ve got to respond better than we did in the second half, but let’s take nothing away from my guys. A win on the road, two in a row, a little better.”

From the thousand-foot perspective, defense won Tech the game on Wednesday night. Dereon Seabron, who averages 19 points per game, finished with 13 and had just five at intermission. Terquavion Smith added 14 while Jericole Hellems had 15, but they had two points each at halftime.

Even though the Wolfpack found their stroke in the second half and shot 48% from the floor, the Hokies’ defense really stifled them and made them work for every basket.

“I thought we guarded the fire out of them,” Young said. “Talked about it at the half. If we can get them to halfcourt and out of transition, they have a really hard time scoring on our set defense. I can say that about most outings. … I thought we guarded very, very well.”

There was a big emphasis on the boards as well, and it showed. Tech pulled down 37 to NC State’s 26, an immense difference from the previous meeting on Jan. 4 when Kevin Keatts & Co. had 14 more rebounds. Keve Aluma led the charge on that front, posting 11, while Mutts had nine.

“We did that now,” Young said of his team’s rebounding. “We were 20 and 11 at the half. Seabron just ripped us to shreds in game one, especially in the last six minutes. But much, much better.”

Mutts and Aluma paced the Hokies in points with 13 and 10, respectively, and every player who touched the floor scored. Nine points came from Nahiem Alleyne, eight from Hunter Cattoor and five from Storm Murphy, while the bench was the best its been so far in league play.

Tech made just seven of its 24 attempts from behind the arc, so its preferred way to score came through the paint. The Hokies put up 34 points in the interior, the duo of Aluma and Mutts was difficult to stop, and even David N’Guessan and John Ojiako found success down there.

“Every chance you can get to touch it down [to the bigs, Mutts and Aluma], the coaches make a good point: You have to touch them,” Pedulla said. “It’s not like a black hole where some big guys, you throw it in and never see it again. They’re looking to pass it back out to you, so whenever you throw it back, it’s just get to the open spot.

“Thought process is just get it down to them, and we’re at our best when we’re playing inside-out.”

Virginia Tech weathered the storm, and the win gets the team off to a strong start in an important week in its schedule. Wednesday’s game was the first of four over the next week, with tests at Boston College, at North Carolina and vs. Miami on the horizon.

As many coaches have said over the years, winning in the Atlantic Coast Conference is difficult to do. Tech’s victory over NC State wasn’t pretty, especially down the stretch, but it shows up in the win-loss column as a positive. Especially after an 0-4 start in the league, it feels even better, though the Hokies can’t dwell on it long.

“Let’s not get ahead of ourselves,” Young said. “Let’s win tomorrow. We’ll clean this up, turn our attention to the Eagles, get to town on Friday and get ready to strap it on at noon on Saturday.” 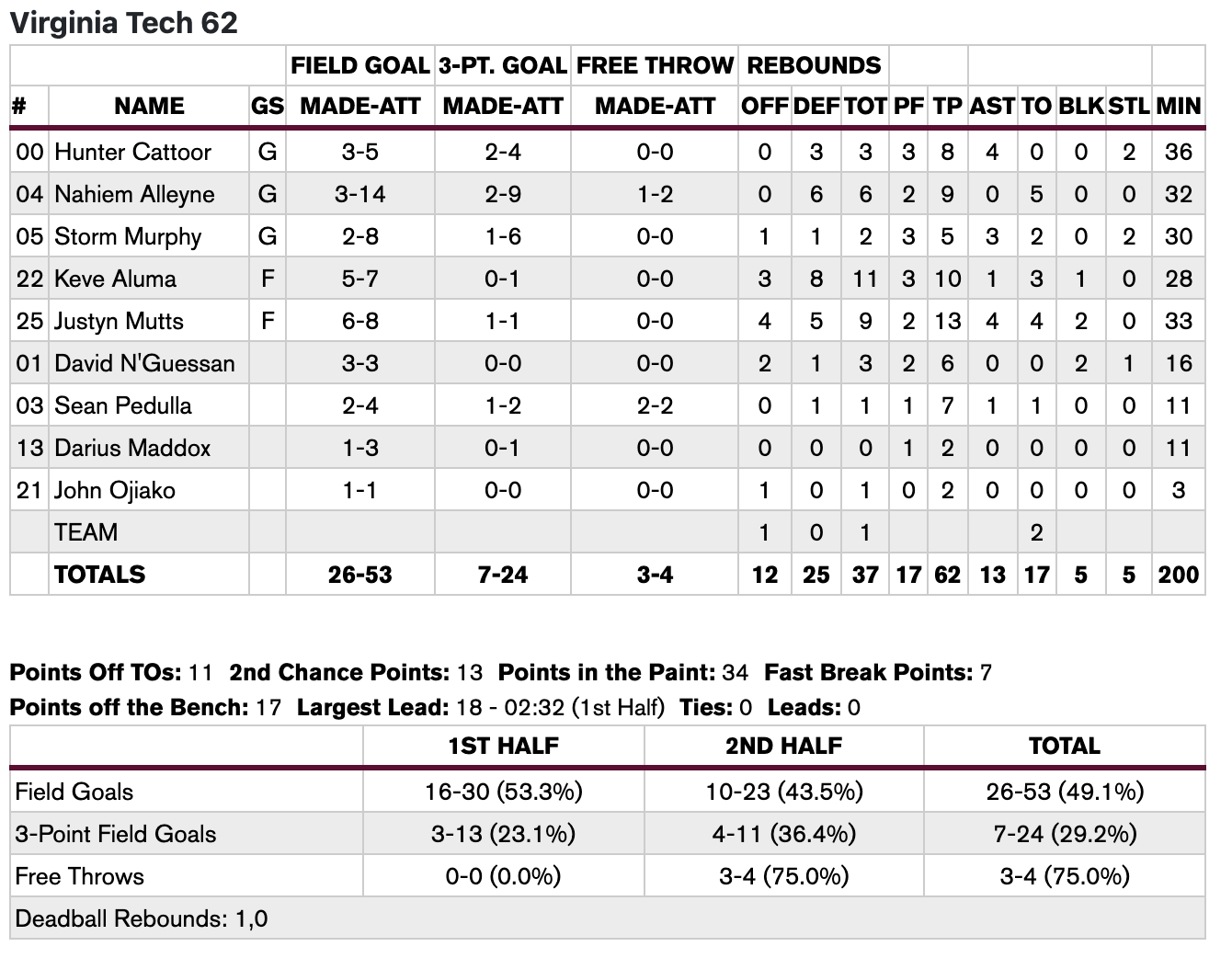 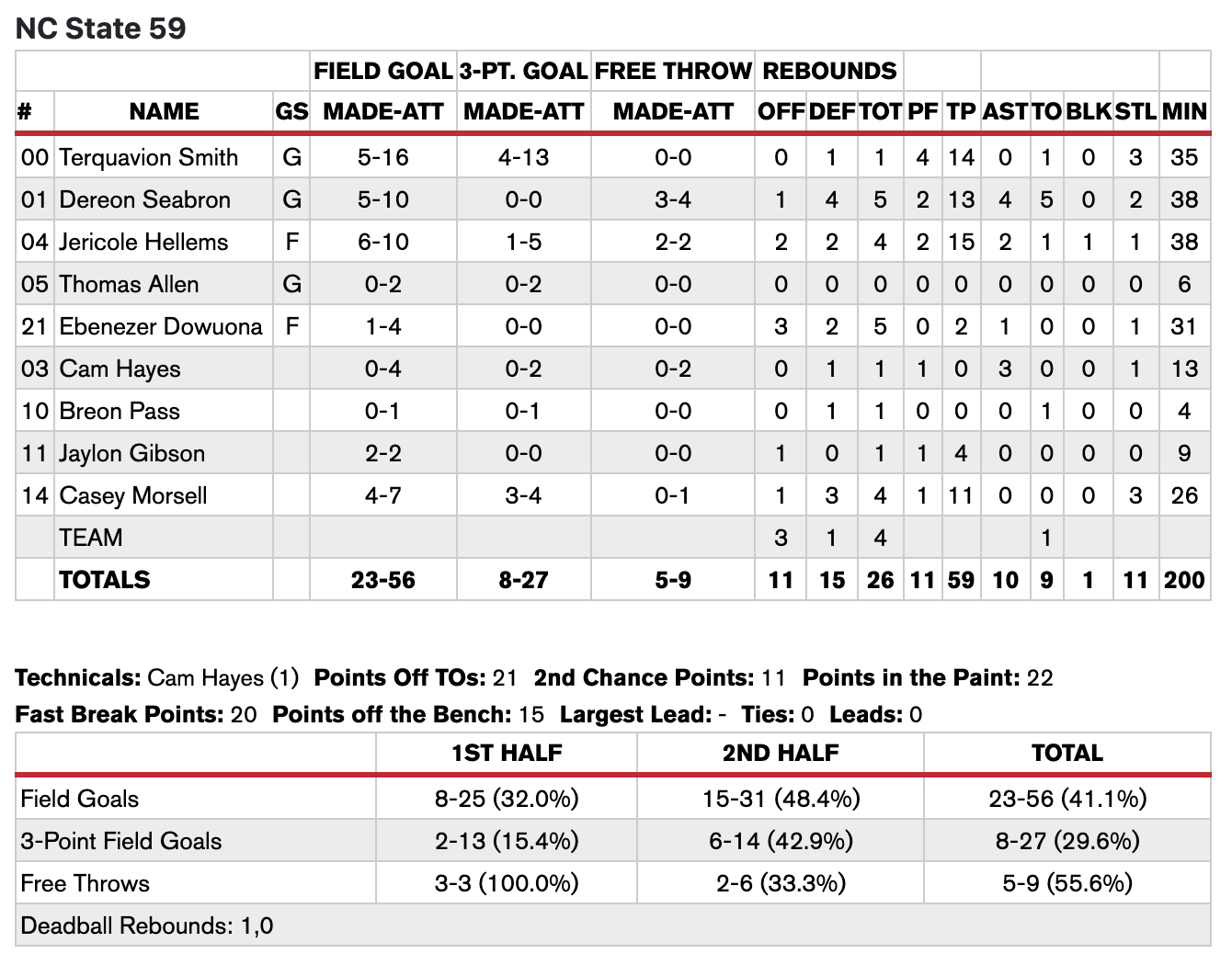