From the first time Maryland touched the ball in The New Era Pinstripe Bowl on Wednesday, few things went right for Virginia Tech. A 92-yard punt return for the Terrapins in the first quarter set the tone for the game, a 54-10 loss for the Hokies in Yankee Stadium.

The 44-point defeat is the worst loss in a bowl game for Virginia Tech in program history, surpassing a 39-point loss to North Carolina in the 1998 Gator Bowl.

“I think it’s a situation where it’s like plowing a snow hill,” interim head coach J.C. Price said after the loss. “Eventually, everything just caught up to us, and we didn’t have enough tonight. They were a better team. They out-coached us. They outplayed us. I give my hats off to Maryland and their staff.”

Despite having possession for 23 minutes in the first half and running 43 plays, Virginia Tech trailed 24-10 at halftime. The Hokies didn’t find any success on the ground, carrying the ball 32 times for 88 yards. They made solid progress in the air – eight completions on 11 attempts for 108 yards (13.5 avg.) – but couldn’t find paydirt.

Meanwhile, Maryland had its way in every phase of the game. It came up with big plays – touchdowns of 70 yards, 32 yards and a fumble return for 11 yards – and scored quickly – four drives of six plays or less.

Taulia Tagovailoa led the way for the Terps, completing 14 of his 15 first half attempts for 192 yards and a touchdown. He finished 20-24 for 265 yards (83%) and two scores, and he tied the single-season Maryland record in touchdown passes (26).

“The quarterback, we knew he was good coming into the game,” Price said. “We knew what was going to happen, and he did it. He scrambled around, extended plays, found receivers. They made plays all night, and it seemed like we were a step behind all night.”

The Terrapins created a big lead in a flash and the Hokies, missing a variety of key players, couldn’t produce anything. Five of Tech’s nine drives in the first three quarters ended in a punt, while the two possessions in Maryland territory that didn’t culminate in a score were a punt and a turnover on downs.

Missing 13 players from its two-deep from the regular season finale against Virginia – seven on offense, six on defense – Virginia Tech looked outmatched in all phases. Even though Price said on Tuesday that the lack of depth on offense and defense was “a little bit blown out of proportion,” the Hokies didn’t look anywhere close to the team that won the Commonwealth Cup back on November 27.

Maryland was more physical up front and completely stuffed Tech’s inside run game, all while exposing a depleted Hokie secondary on the other side. As Price said post-game, “there weren’t many holes.”

That opened the door for the offense, and a consistent Terrapin attack – plus a strip sack for a score – led to 33 unanswered points, 30 in the second half.

“Our team did a great job on offense of just sticking to what we wanted to get done,” Maryland head coach Michael Locksley said. “Our quarterback stayed really consistent with his execution, and the guys up front gave him time to make the throws, and also we were able to run the ball, and I think that played a major part in it. Wore them down a little bit.”

Tech quarterback Connor Blumrick completed nine of his 15 pass attempts and ran for 11 yards on 15 carries, while Raheem Blackshear had just 46 yards on the ground. For comparison, Blumrick totaled 132 rushing yards at Miami in November, while Blackshear had 169 against the Cavaliers. Maryland shut down those two, along with the rest of Tech’s run game, in New York.

With the absence of quarterbacks Braxton Burmeister and Knox Kadum, both of whom entered the transfer portal, Blumrick started and played the majority of the game. True freshman Tahj Bullock saw his first collegiate minutes and completed two of his four passes for 27 yards. He also carried the ball six times for 14 yards, the third-most yards on the team.

“Me and [offensive coordinator Brad Cornelsen] had conversations about how we wanted to work Tahj into the game,” Price said. “We didn’t want to put him in a bad situation, so we decided to rotate him like we did. …  I think that kid has a bright future. There are things he needs to work on, obviously, but he has a high care factor.”

All in all, however, it was a disappointing day for the Hokies in New York, especially for the many Tech fans among the 29,653 in attendance that made the trip.

Price did a solid job of putting this group together, particularly after inheriting the team with three games to go, needing a win for a bowl berth. Indeed, the Hokies won in Charlottesville, earning an opportunity to extend their season, but their depleted roster was no match against former ACC foe Maryland.

“And so it begins” – Théoden of Rohan, The Lord of the Rings: The Two Towers.

The loss in the Pinstripe Bowl marks the end of the Justin Fuente era at Virginia Tech and the beginning of the Brent Pry age. The former coach left the Hokies in a tough situation, and Price steered the ship for the remaining weeks. He put everything on the line for his alma mater, soaked in the opportunity and lived out a dream.

As the players exited the field after the bowl game, Price embraced each one. He inherited a grand opportunity in an unfortunate situation. He said multiple times how he never wanted to become a head coach in that fashion. But Price did everything in his power to put Virginia Tech in a situation to win its last four games.

“I’m proud to be their coach,” Price said. “I’m proud of those guys. Maryland was a better team today, obviously. They were better coached. They played better. That doesn’t stop a person from caring about somebody because you lost a football game, and I care about those guys.”

Now, the transition. Outside of Price and Pierson Prioleau, Pry’s safeties coach, the old staff’s time is done. The new group Pry has assembled can go to work with remodeling and reshaping the program and the culture.

A few players such as linebacker Dax Hollifield, defensive end TyJuan Garbutt and quarterback Connor Blumrick have announced they are returning for another season. Many others have said they will continue their careers elsewhere.

Either way, the conclusion of the bowl game marks a new rule in Blacksburg, one Hokies hope will be more sustainable than the last. 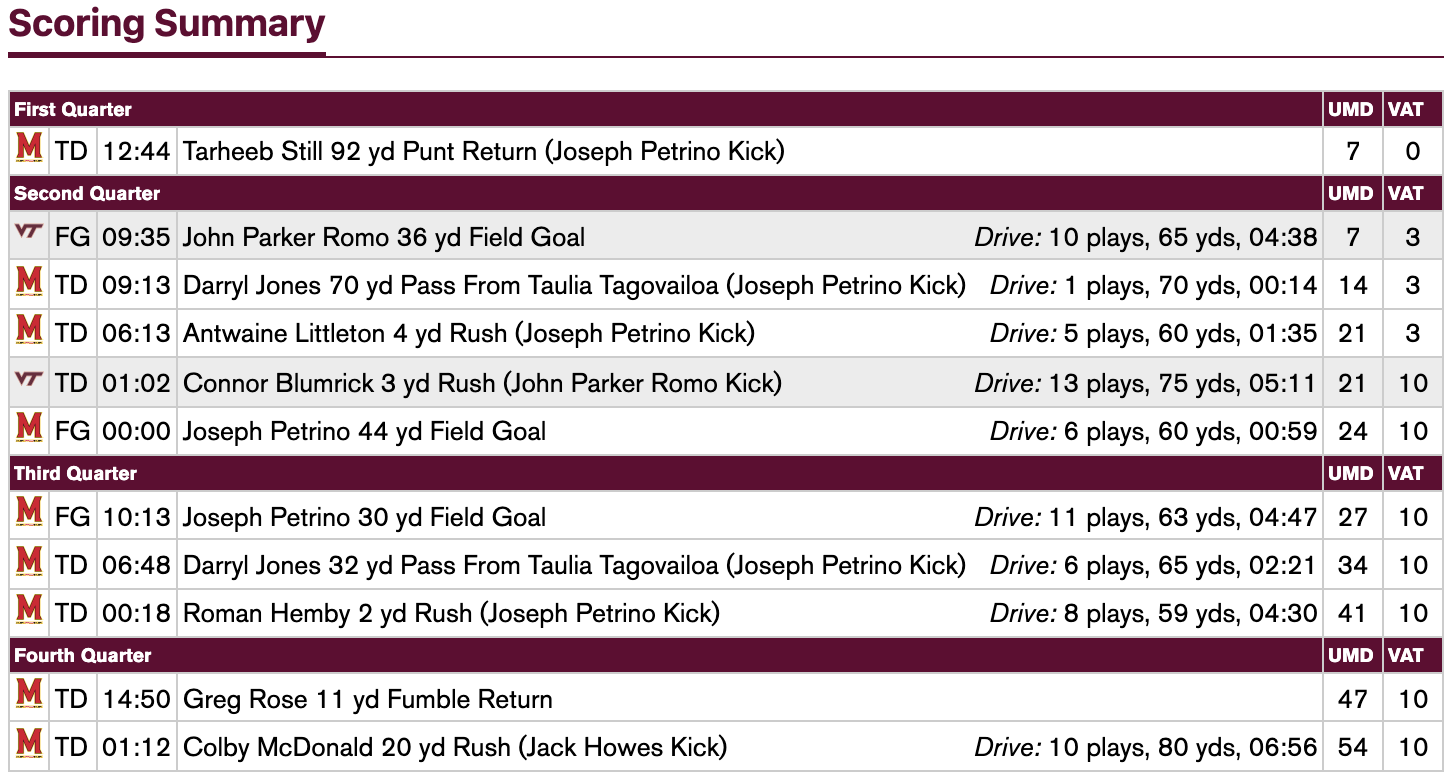 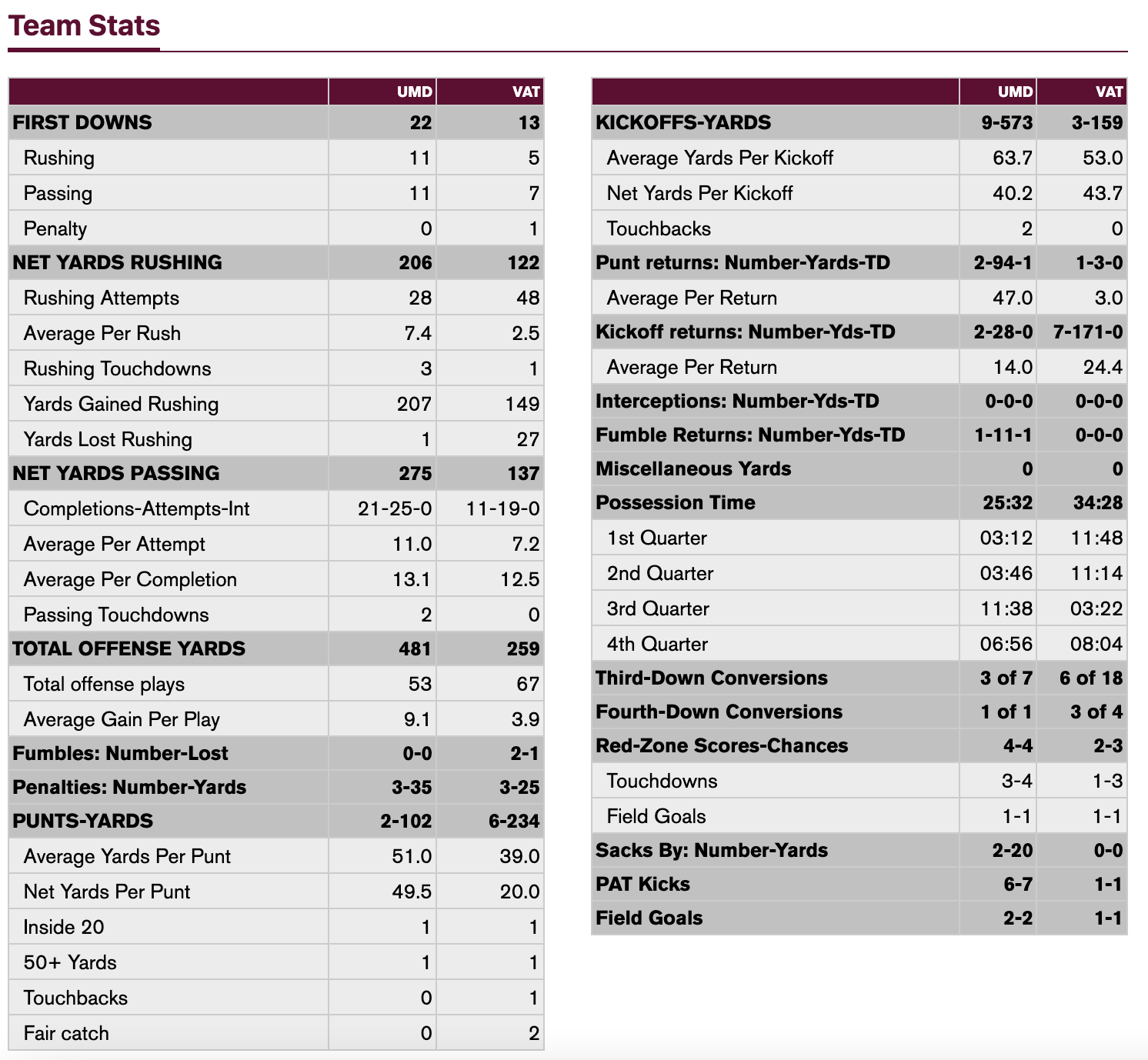 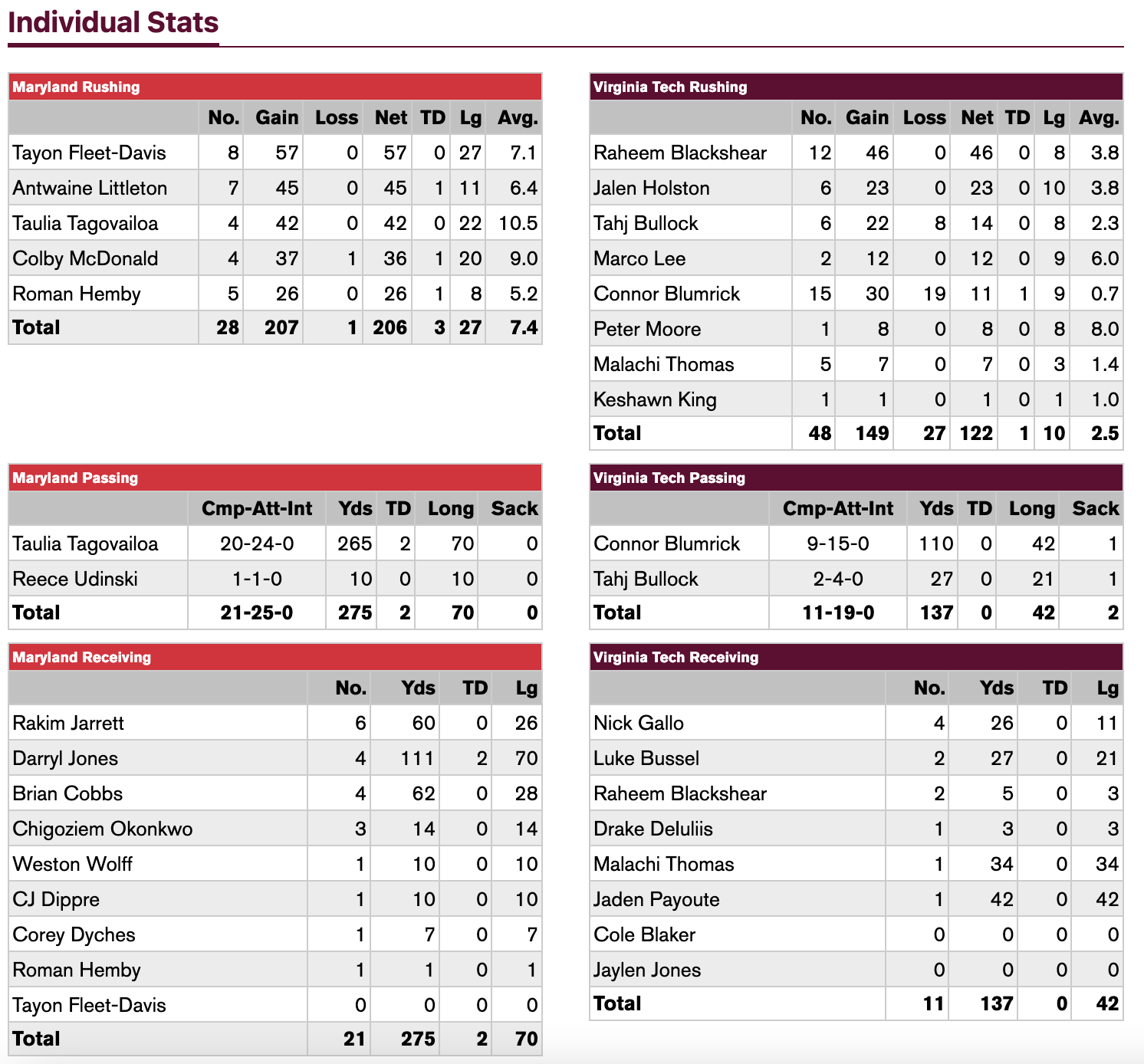 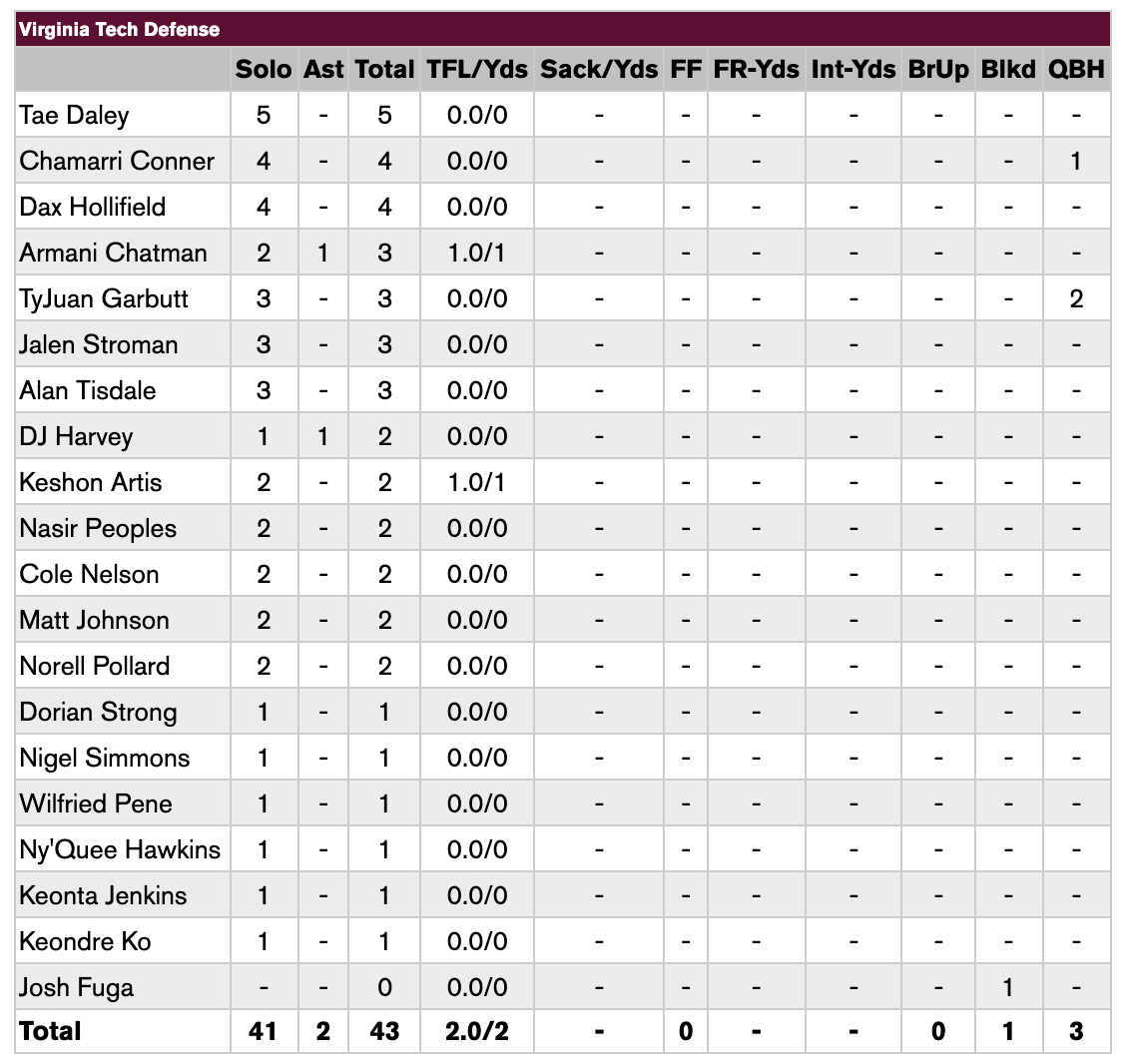