In previous games this season, Virginia Tech was stagnant offensively. Mike Young’s “motion” offense lacked its title, and despite the team staying in games defensively, the shooting woes bogged the Hokies down.

But on Friday in Charlotte against St. Bonaventure, Virginia Tech’s offense came alive in the 86-49 win. The Hokies (8-4, 0-1 ACC) never trailed the defending A-10 champion Bonnies (8-3), and a 13-0 run out of the gate propelled them to a victory in the Spectrum Center.

“I think we just brought back our swagger, the swagger we have as Virginia Tech,” Hunter Cattoor said afterwards. “We know our identity. Going into practice, we felt like we just got away from that emotion out there. We felt like we were just out there playing ball, so today was a big emphasis on just having emotion out there, enjoying the game and having fun, and I think it showed out there today.”

Young & Co. entered the game having lost four of their last six, but four days of pure practice helped them find their offensive game again.

“This week, we really had an emphasis on that, more than ever this year. We talked about moving bodies and moving the ball and trying to really make St. Bonaventure guard us. When we do that, you can see how good of a passing team we are and how unselfish we are.”

In almost a must-win situation with a gauntlet on the road in the ACC on the horizon (Duke, North Carolina), Virginia Tech came to play. Cattoor, who was named the game’s MVP, was particularly impressive with his game-high 21 points and perfect five-for-five three-point shooting. Murphy had a season-high 18 points, too, and found his shooting stroke, drilling seven-of-ten field goals (4-7 3FG).

Keve Aluma played with some confidence after struggling early as well. After missing four of his first five shots, he connected on four of the next six. He finished with 12 points (5-11 FG, 4 assists, 3 rebounds, 3 steals).

Only Nahiem Alleyne (3-10, 2-8 3FG) struggled shooting the ball. That’s two games in a row where the junior has had trouble finding the bucket. However, every other Tech player (seven of them) that saw ten minutes shot above 50%.

“I think it goes back to us moving the ball in our motion,” Cattoor said. “We were just being unselfish, getting the shots that we know, that we want, and in past games we weren’t having good motion, so we were taking contested threes, threes we didn’t want.

“When the ball moves, we’ll turn down a good shot for a great shot.”

Defensively, the Hokies smothered St. Bonaventure. Mike Schmidt’s team finished 18-53 (33%) from the floor and 6-23 (26%) from beyond the arc. Tech was connected on both ends of the floor, but playing unselfish defensively, as Young described it, really gave the offense a boost.

It’s as good of a time as ever for Tech to get back to its previous form. A journey to Tobacco Road is up next on the docket with Christmas sandwiched in between, and the team is already 0-1 in league play. Had the Hokies come out sluggish again, it could’ve resulted in their fifth loss in seven games.

“From the time we arrived in Charlotte, we were locked in on playing the most connected basketball we had all year,” Murphy said. “Not paying attention to the scoreboard, but just having that feeling, each person individually, and I think that bled throughout the team and looked up after four and we were up 13.”

Indeed, Virginia Tech was focused. The Bonnies missed their first nine shots, Tech got up big early and didn’t look back. The Hokies will need to carry that kind of connectivity over to their trip to Cameron Indoor Stadium next Wednesday.

“It wasn’t just the X’s and O’s this week that went right for us in the game to get this win,” Murphy said. “There are a lot of things we talked about in this locker room and the film room and off the court in hotels, and those type of things are really important for our culture this week heading into the next game.” 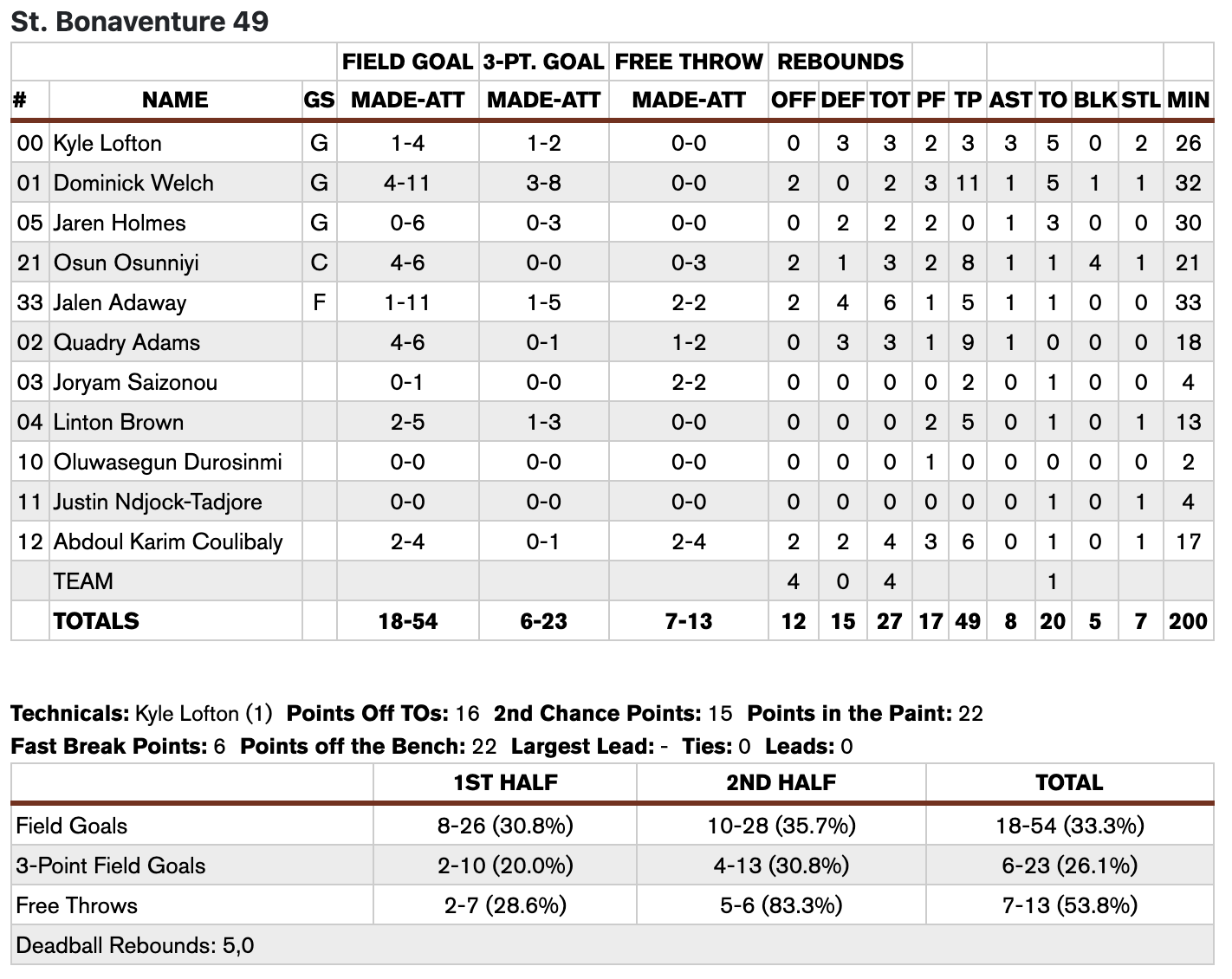 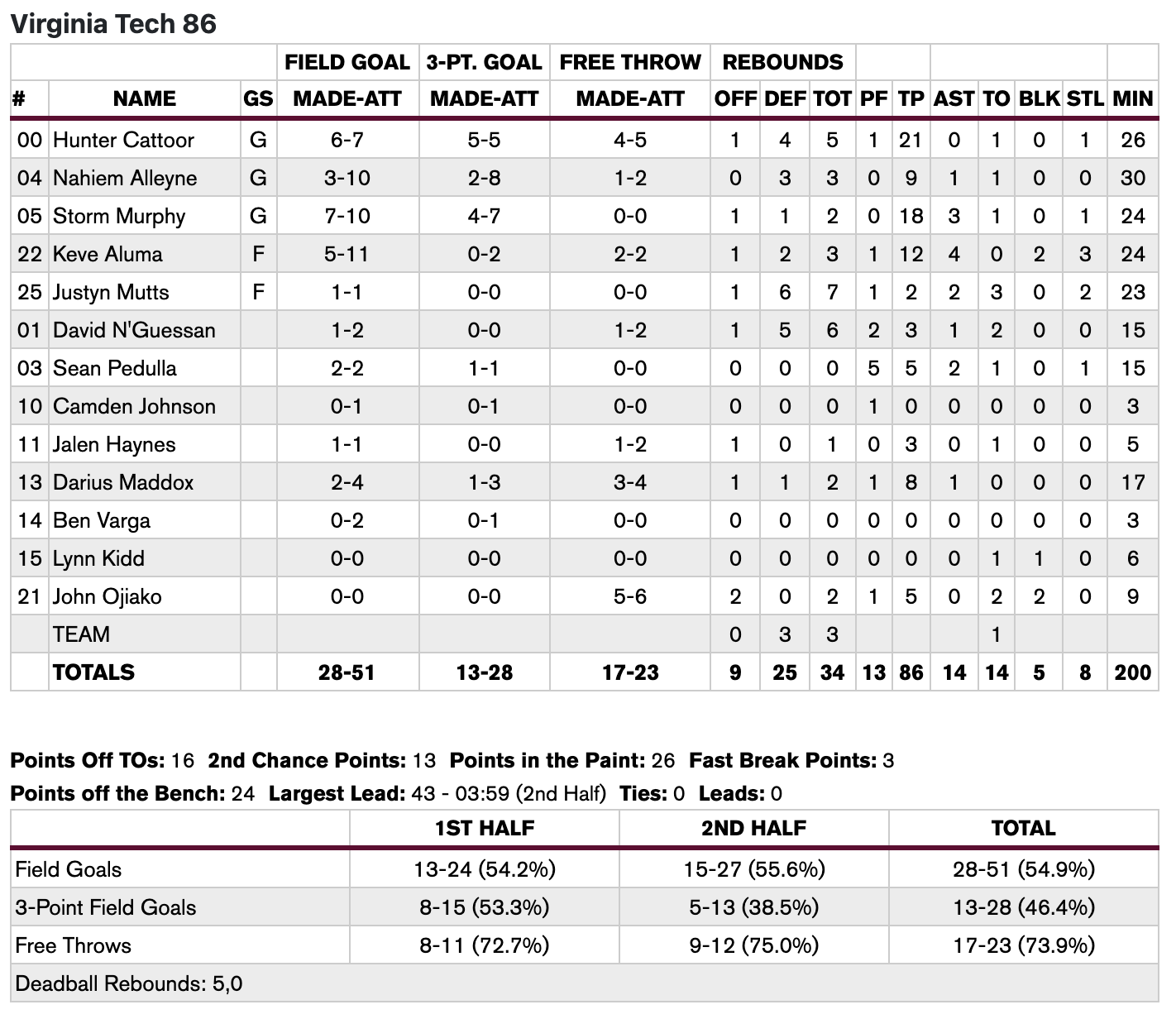