From the get-go, Virginia Tech was bested by Wake Forest in Cassell Coliseum in an 80-61 loss in the first ACC game of the season.

Steve Forbes & Co. couldn’t miss on Saturday afternoon. They connected on 33 of their 52 field goals (63.5%), including 7-16 (43.8%) from behind the arc, and were simply better than the Hokies. That mark from the floor is the second-highest mark from any opponent against Tech in the Mike Young era, just behind Dayton’s 63.6 in Maui in 2019.

“I thought we were playing catch-up all night and not catching up in terms of scoreboard, catching up in terms of in terms of guarding them,” Young said afterwards. “From the opening possession, we got strung out and Williamson hit a three over opposite our bench. This team, this Virginia Tech team, has been very, very good on that end all year, with the possible exception of one in New York.

“Just an accumulation of minor details on our part that cost you ballgames. Poor communication, and they thrive, they do a good job, they thrive on your mistakes on that end on that end of the floor and we made enough to make them pretty good this afternoon.”

Tech (6-3, 0-1 ACC) struggled to score early but grew into the game in the later stages of the first half on that end of the floor and trailed by four at the half. Strangely, the better its offense played, the worse it was on defense.

Keve Aluma led the Hokies with a season-high 23 points and hit eight of his 16 field goal attempts, including four-of-seven from long range. He made three treys in the first half to keep the team in the game, which is impressive considering he was just two-of-16 entering the afternoon. He also added nine boards, too.

The Hokies’ problems were rooted in poor defense, to which Young alluded. They had just three instances over the 40-minute stretch where they scored, got a stop and scored again. Two of those moments were back-to-back in the first half, and the one time in the second half was capped off by two free throws from Alleyne, not even a field goal.

The Demon Deacons played well defensively and made offensive possessions difficult for VT, but it was Tech’s inability to get stops that opened up the game for the taking. Wake Forest had a consistent presence offensively, which never gave Young’s team an opportunity to claw its way back.

Picture Mufasa in The Lion King, hanging from the cliff and slowly slipping down. That was Virginia Tech, needing a Wake Forest drought to have a real chance late in the contest. The Hokies couldn’t get stops and the Deacs continued to score, which was essentially Scar forcing Mufasa to his doom.

“I thought there came a point in the second half where our lack of getting stops, getting those three straight stops that we talk about all the time, that had a snowball effect on the offensive end,” Young said. “I was fine with the shots we were getting and Aluma was good. … Nahiem had a tough day, Hunter Cattoor had a tough day. Storm has got to come on for us. They will. Those guys are too good of players.

“I don’t think it was anything defensively that Wake Forest was doing, but I continue to go back to the defensive end. Just an atypical Hokie performance on that end of the floor. I think LaRavia had three first half offensive rebounds. Just not sharp.”

Those sentiments were echoed by Murphy and Mutts postgame. Mutts said the Hokies “just weren’t clicking,” and mentioned that they weren’t all on the same page.

“Our defense just did not connect today at all,” Mutts said. “We have to do a better job of making sure it’s a habit, that it’s something we do every single time, that we’re able to be on the same page, five fingers in a fist. That’s something coach Young likes to say, and we were not that today.”

Mutts said the Demon Deacons were more active than his team was, and Murphy alluded to the defense being just a little bit off. It’s strange, because even when Tech’s offense has struggled this year, the defense has been there to give the team a chance.

“We were just scrambling too much and playing catch-up,” Murphy said. “The defense usually has been so great for us and I think Wake has a lot to do with that. They’ve got a lot of talent, they have a great offense where they’re running a lot of ball screens, and they’re savvy with their slip-outs and their back cuts.”

Young said the loss reminded him of the Penn State game in Blacksburg in 2020-21, where the Hokies were walloped by 20 points. They couldn’t keep up because they couldn’t guard the Nittany Lions. The good news is after that ACC/Big Ten Challenge loss, Tech ripped off seven wins in its next eight games.

Now the Hokies’ attention turns to Cornell, Dayton and St. Bonaventure in its final three non-conference games. It’s also the first time the team has started 0-1 in league play in the Young era, and road trips to Duke and North Carolina are next on the docket.

Tech has some work to do between now and then, and its next games will give them an opportunity to work some of those kinks out.

“A sprint to the ball. Better shot contest. Playing with high hands. Better closeouts,” Young said on what little details need to be improved. “We’ve got the last home game before January on Wednesday and then back out against good people. It’s Dec. 4, we’ll be just fine around here.” 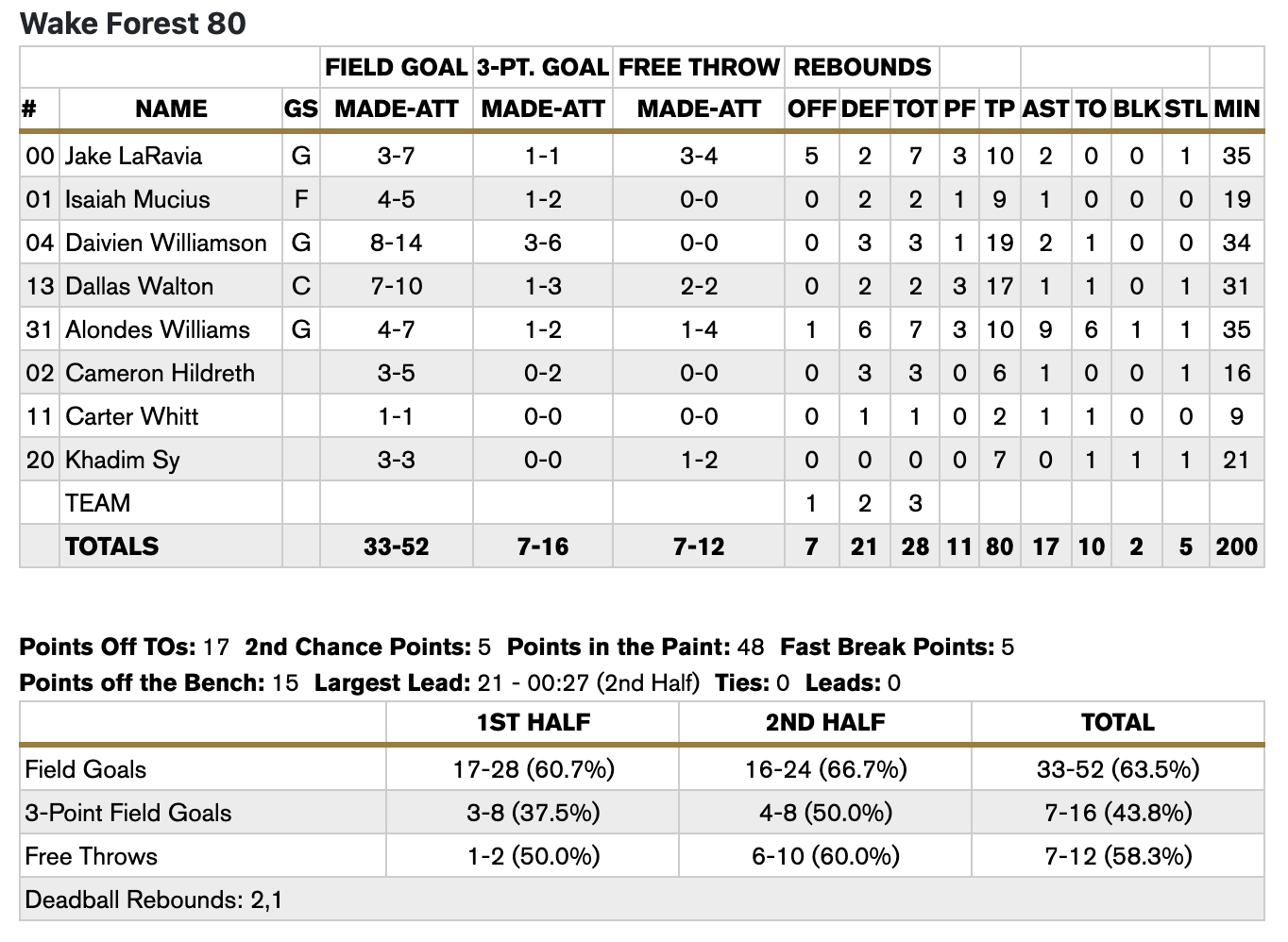 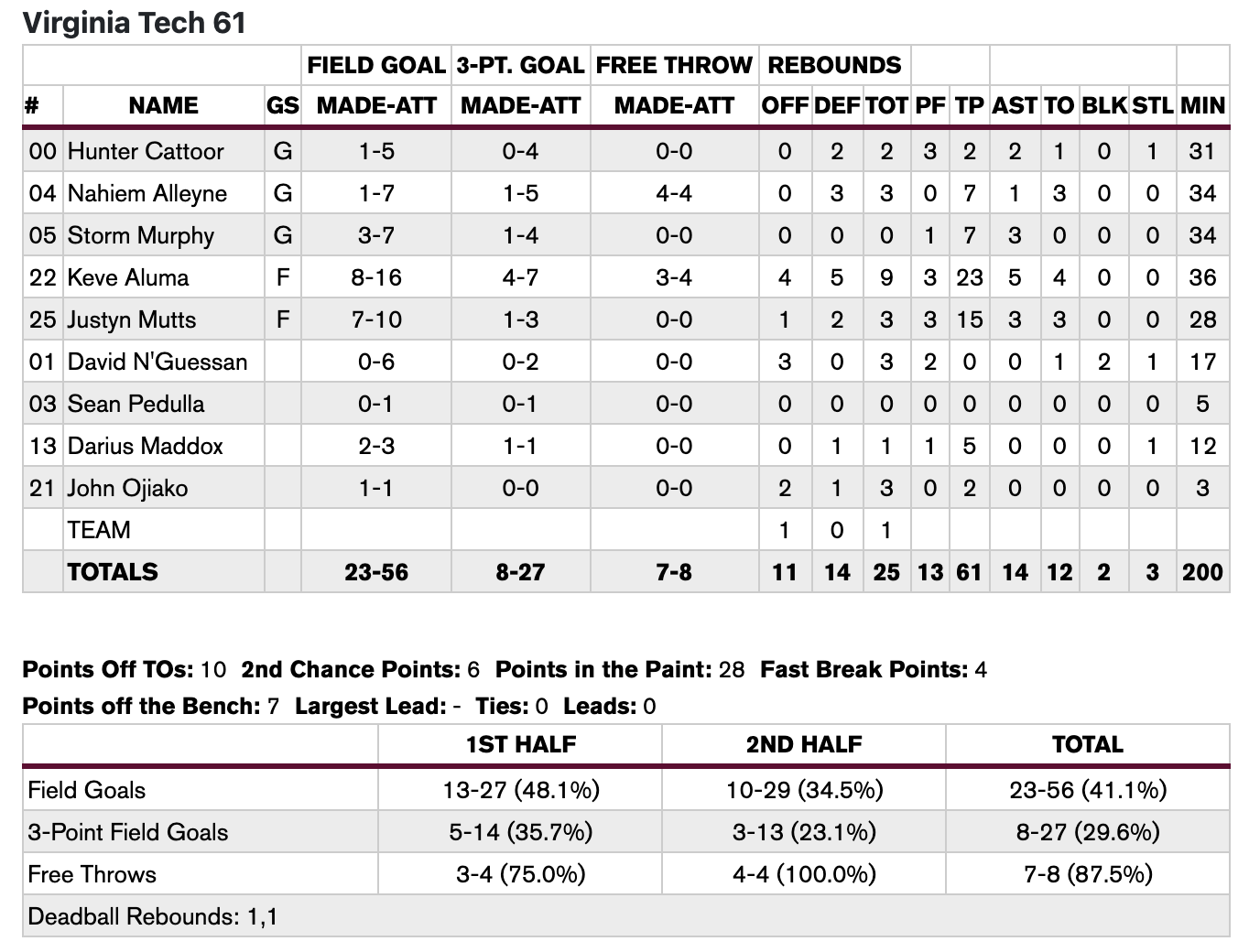