Aisha Sheppard ran back down the floor, her arms spread like angel wings and high-fived a few teammates as set herself back up on defense. The shot that she created was almost seemingly a dagger in a game that had yet to reach the first media timeout in the first quarter.

Before the shot, she stepped inside the arc, then back out of it, creating separation between her and a Coppin State defender before raising her arms to shoot and nail the three-pointer. It was her second three of the night, one that gave her 1,500 career points as she became the sixth player in program history to reach that mark.

“To me, the accolades don’t matter,” Sheppard said after No. 25 Virginia Tech’s 85-32 win. “Wins and playing together as a team are the only thing that matters to me at this point.”

Virginia Tech (4-0) leaned on a first-half surge to total its best offensive performance of the season.

At the expense of arguably its worst opponent, this is a VT team that hasn’t had trouble creating turnovers or forcing its opponents into bad shots. A team that still appears to be as complete as any in the ACC but is still “figuring out its identity,” as head coach Kenny Brooks noted. It’s a team that hasn’t had any sort of trouble shooting the ball from beyond the arc, scorched Coppin State (2-2) for 39 points from deep.

“It’s good to win, obviously, you get to learn your team and you try to develop chemistry and rotations,” Brooks said. “I thought we had some stretches tonight where we looked like we were capable of being [a Sweet 16 team], but we’re still trying to develop a mentality or an identity. We need to get tougher from a mental stretch to be what we want to be. Overall, I’m very pleased with the outcome and we’ll continue to get better.”

Virginia Tech began the game looking toward an onslaught. It scored before the clock even began winding down as Amoore knocked down one of her two free throws after Coppin State was assessed a technical foul for not turning in its starting lineup more than 10 minutes before the game started. But as soon as it began, Virginia Tech scored on all three levels, jumping out to an 18-2 lead halfway through the first quarter.

“There’s going to be a night where we score 20 [threes], I promise,” Brooks said. “Watching them shoot, I’ve never had a group that can shoot as well as they do.”

Emily Lytle, in her second start of the season after a switch was made against George Mason on Sunday, recorded seven of the Hokies’ first 14 points in the opening three minutes. Coppin State was never really able to chip away as it trailed by 30 and shot 15% compared to VT’s 44%.

Even as VT struggled to shoot the ball in the third quarter (7-of-21), the Eagles couldn’t chip away at the mountain of a score they faced. Tech applied the defensive pressure all night inside the arc and controlled the perimeter, only allowing CSU to shoot 15 threes (it only made two of them) and held them to just 11 made shots all night (19.6%).

The Hokies put the game away early and allowed the fans to take control for the rest of the night, never worrying about the gap Coppin State faced since it was too insurmountable to close.

Campbell (2-1) awaits on Saturday at 5 p.m. The game will be televised on the ACC Network Extra from Cassel Coliseum. 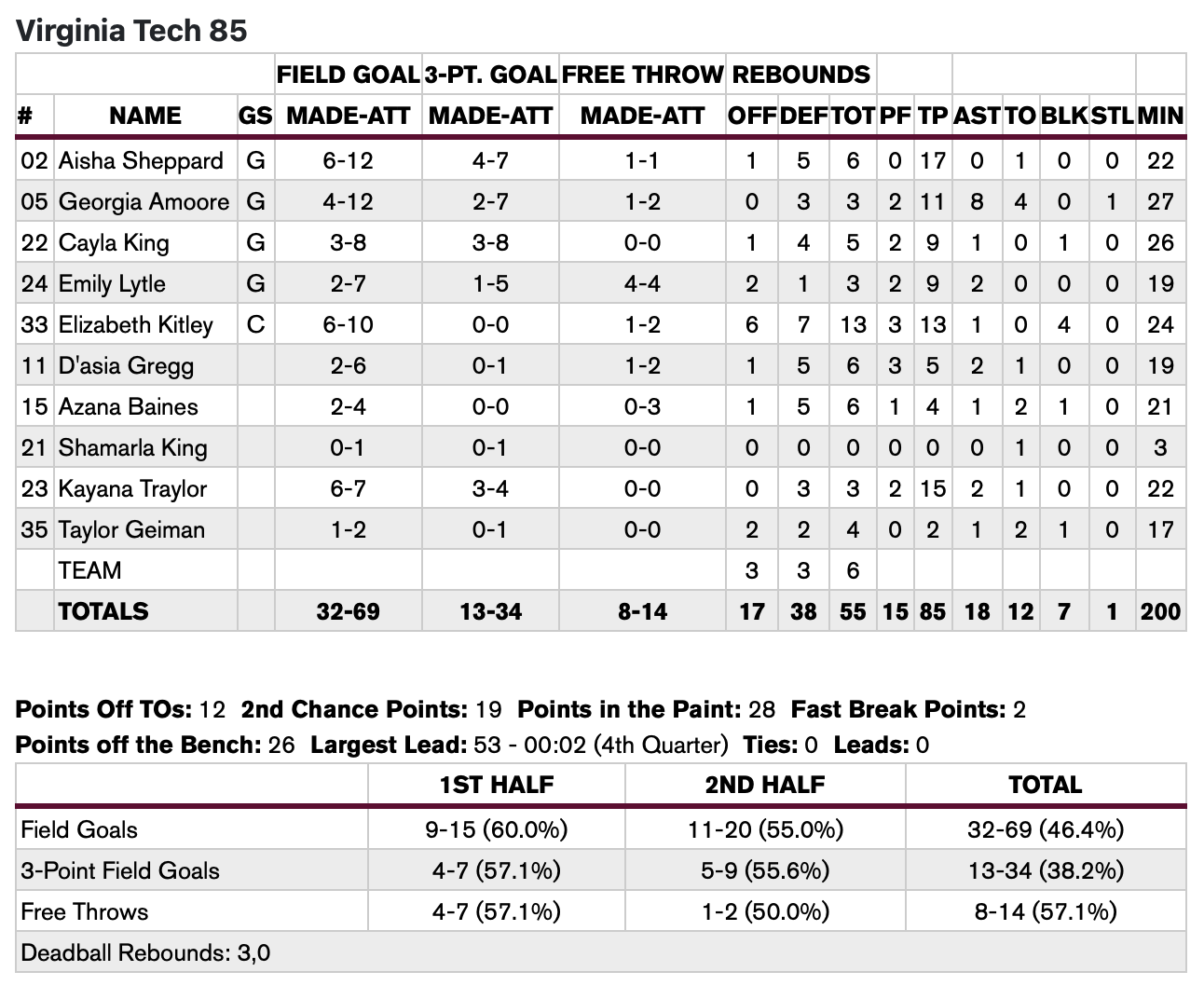 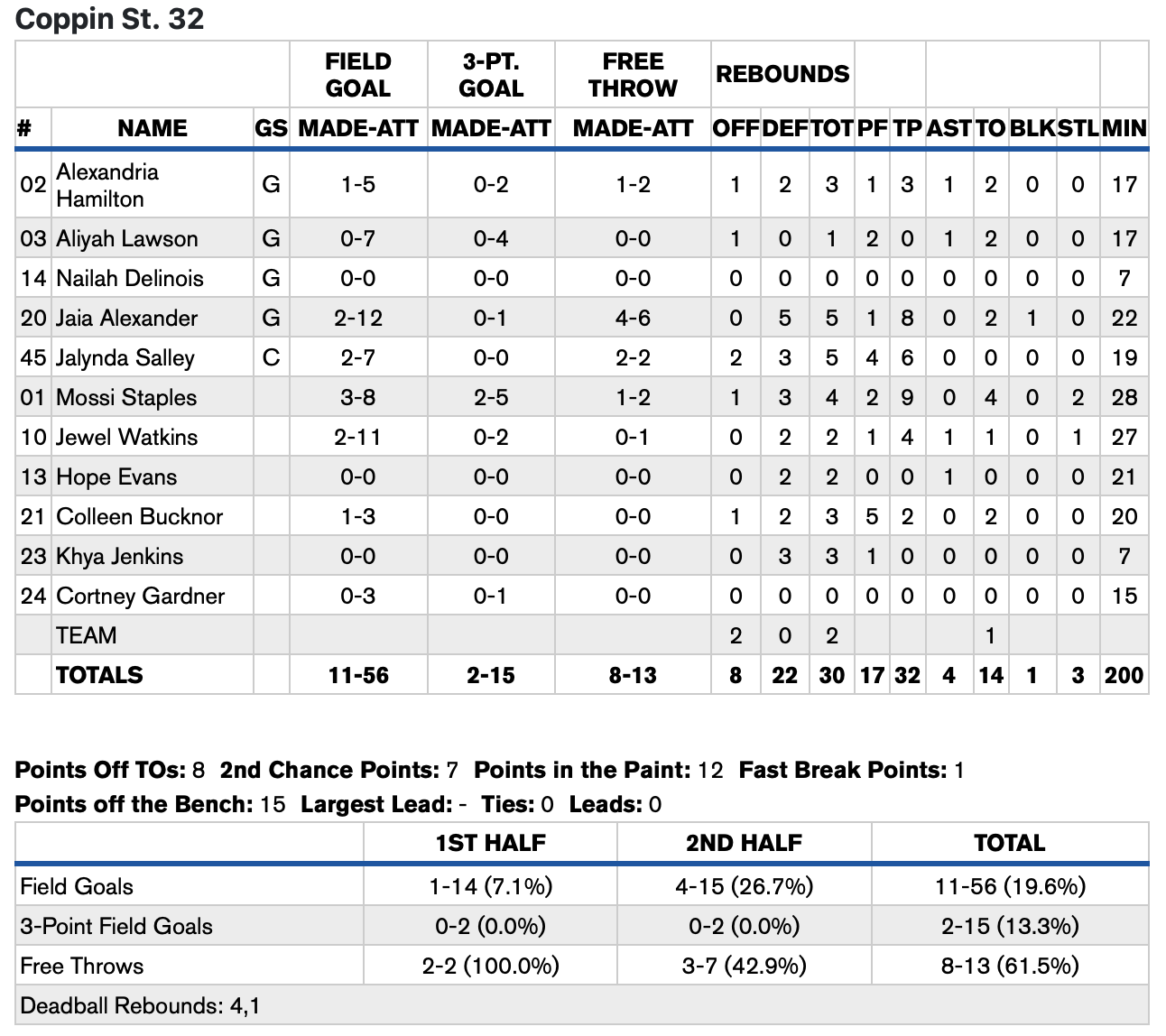