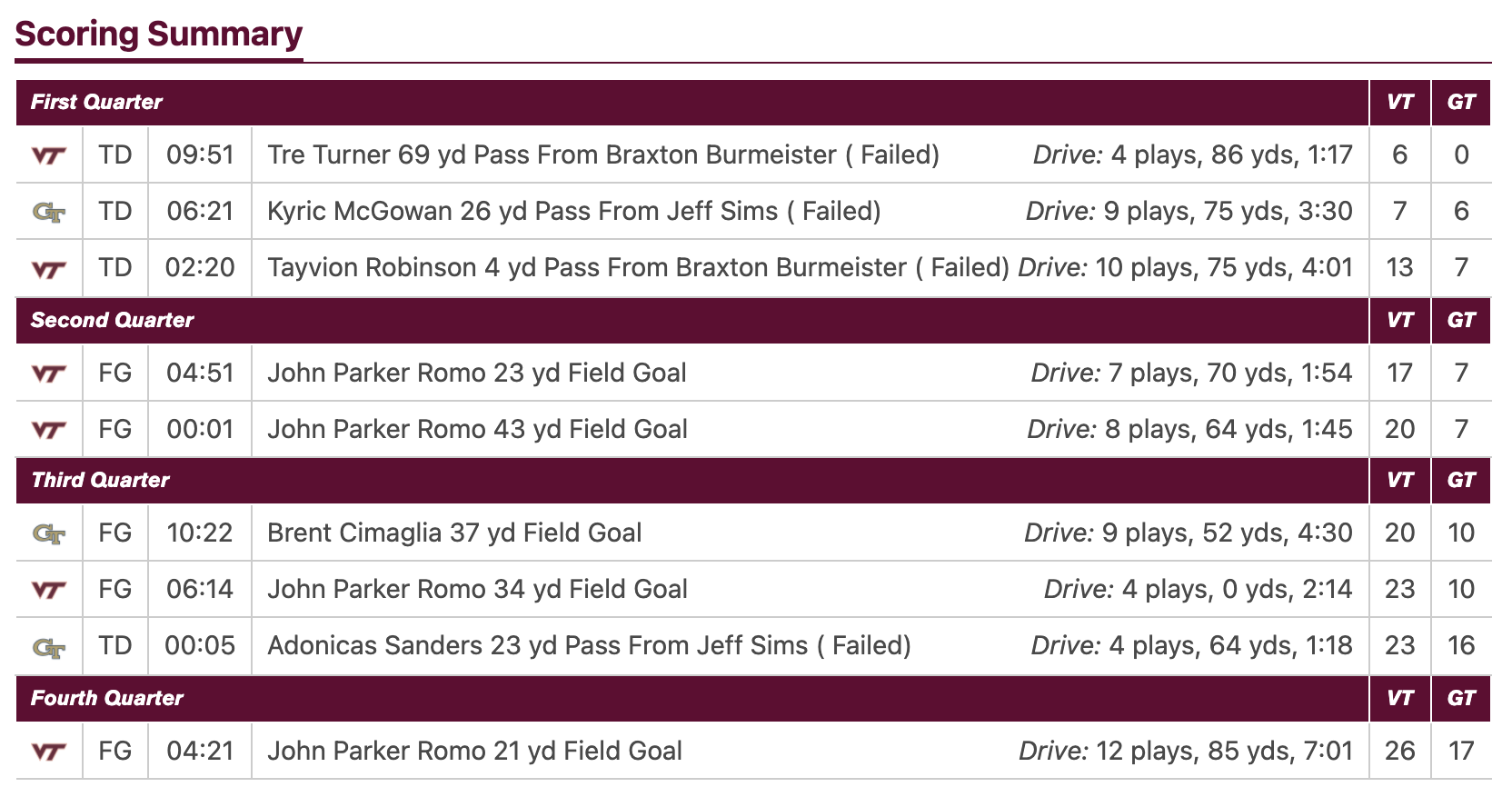 When you lose, your confidence drops. When it happens repeatedly in heartbreaking fashion, it kills your confidence even more. That’s the situation Virginia Tech found itself in on Saturday against Georgia Tech. However, with their backs against the wall, the Hokies rallied, winning 26-17 in Atlanta.

“We were on a three-game losing streak,” Virginia Tech wide receiver Tre Turner said. “We needed that win, badly.”

Justin Fuente’s team played its most complete game of the season. The offense totaled a season-high 491 yards, while the defense forced two turnovers and got stops when needed. Special teams excelled, too, as John Parker Romo made four-of-five field goal attempts and Peter Moore pinned Georgia Tech inside the 20 twice.

It was the performance Virginia Tech had spoken about all season, and though it wasn’t pretty at times, it got the job done.

“Quite honestly, they owned it [the Syracuse loss] and went to work [this week] to try and recapture the level of play we showed earlier in the year,” Fuente said. “You learn a lot about people when things don’t go well. Those kids certainly responded.”

It started with the running game, as Fuente said postgame. It sparked the Hokies in Blacksburg against Syracuse, and it was the same against the Yellow Jackets. Malachi Thomas rushed for 103 yards on 25 carries while Raheem Blackshear added 83 yards on 14 touches. Overall, Virginia Tech ran the ball effectively and efficiently: 237 yards, 53 rushes, 4.5 yards per carry.

That opened up room for the aerial attack, which flowed through Turner all afternoon. He finished with seven receptions for 187 yards and a touchdown, the fifth-most receiving yards by a Hokie in a game since 1987. It’s the second-most yards a Virginia Tech receiver has had in the Justin Fuente era, just shy of Cam Phillips’s 189 in 2017 at East Carolina.

To open the scoring, Turner took a 69-yard pass to the house. He had a 61-yard reception that set up a VT field goal in the second quarter, and also had gains of 26 and 12. Tayvion Robinson added Virginia Tech’s only other touchdown of the game.

“They [big plays] have been in there [the offense,” Turner said. “You can go back to multiple interviews of players on offense talking about how we’re this close to taking this thing off the top. Today, it all gelled.”

Even though the Hokies didn’t score a touchdown after the first quarter, they moved the ball. VT had five drives of 60 yards or more (out of 12), four drives in which it ran at least ten plays, and ate the clock, especially the seven-minute drive in the second half. 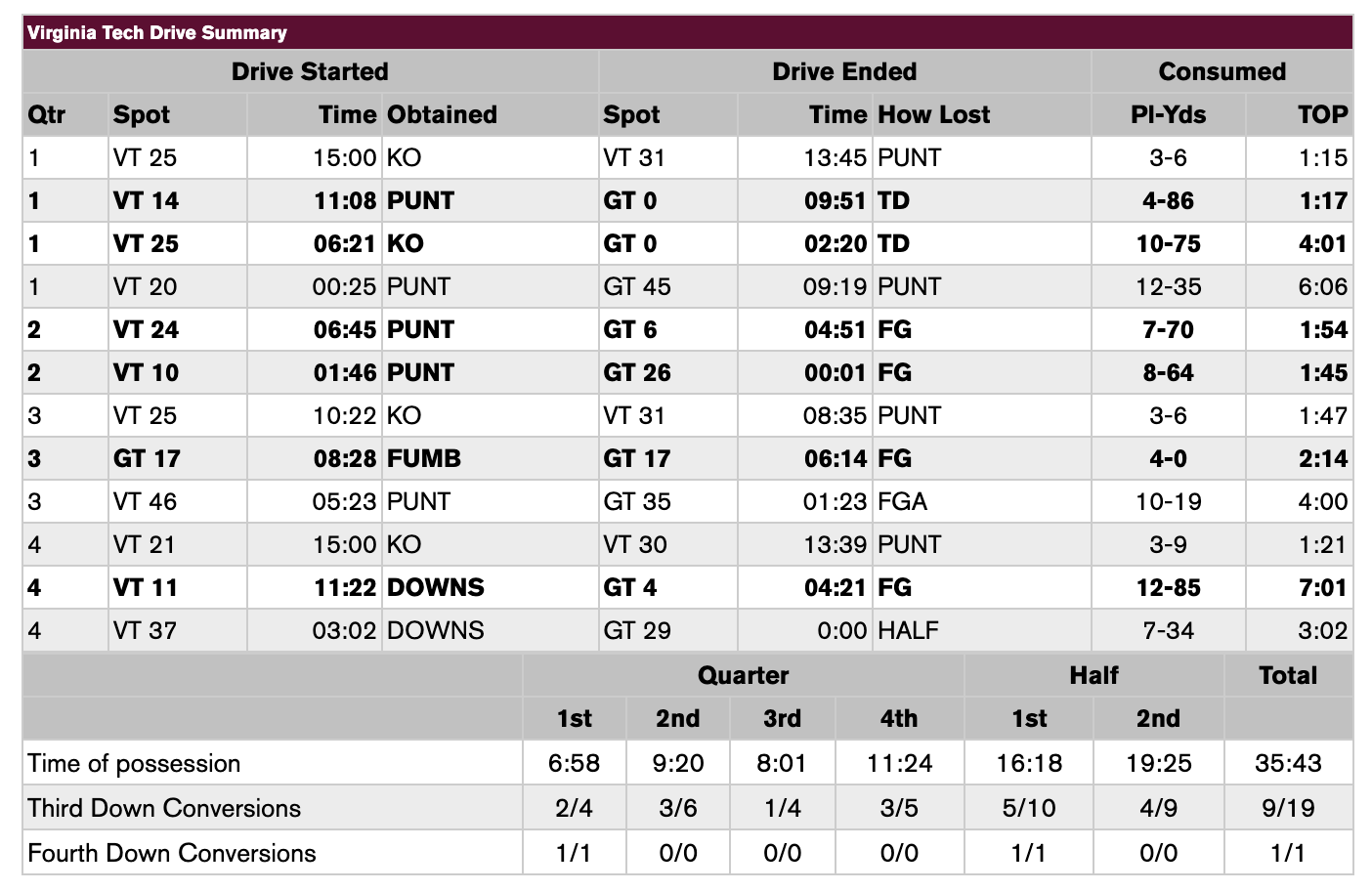 The lone gripe about the offense is that the unit didn’t convert good field position. On the two possessions where it started with excellent field position (both in the third quarter), VT ran 14 plays, gained 19 yards and only came away with three points in six minutes.

However, the offense did move the ball, and John Parker Romo was almost perfect. He kicked five field goals and made four, the lone miss from 53. He scored 14 of Virginia Tech’s 26 points (two PATs), and he gave the Hokies an important boost.

“He [John Parker Romo] was huge,” Fuente said. “He’s really turned it on as the season’s gone on.”

That took pressure off of the defense, which bounced back from a really poor outing against Syracuse. Linebacker Dax Hollifield and defensive tackle Norell Pollard both mentioned how motivated the Hokies were defensively heading into Georgia Tech, and how much they needed a win.

They looked the part on Saturday, and they played like it. Justin Hamilton’s unit racked up six tackles for loss and two sacks while forcing a fumble and intercepting Jeff Sims once.

Jahmyr Gibbs ran well for the Yellow Jackets, breaking the century mark with 113 yards on 11 carries (10.3 ypc). Georgia Tech scored its two touchdowns through the air on connections to Kyric McGowan and Adonicas Sanders.

When the Hokies needed a stop, though, the defense stepped up. That moment came early in the fourth quarter.

After Gibbs broke off a 61-yard run to put GT in the red zone at the 20, VT’s defense came up clutch. Needing ten yards, the Yellow Jackets gained eight on four plays, and on fourth-and-two, Virginia Tech loaded the box and stuffed Jordan Mason to force a turnover on downs.

This is a Tech defense that had allowed opponents to convert 12-of-15 fourth down conversions entering Saturday. It was clutch when it needed to be against Georgia Tech, however.

“It was a huge momentum play,” Fuente said. “I told the team that I thought the difference for this game would be two yards. Running the ball and ending up in second and six vs. second and eight.”

That set up the Hokie offense for its 12-play, 85-yard drive that ate seven minutes of clock, capped off by Romo’s fourth field goal of the day.

In Atlanta, the Hokies did enough to win in all three phases of the game. That’s a big confidence boost for a team that lost four of its last five, including three straight at home.

“I think we know we’re a damn good football team and we just have to go and prove it,” quarterback Braxton Burmeister said. “In the second half, [we have to] really take the game away from the other team and not let them sit around in it and I think that’s what we did today.” 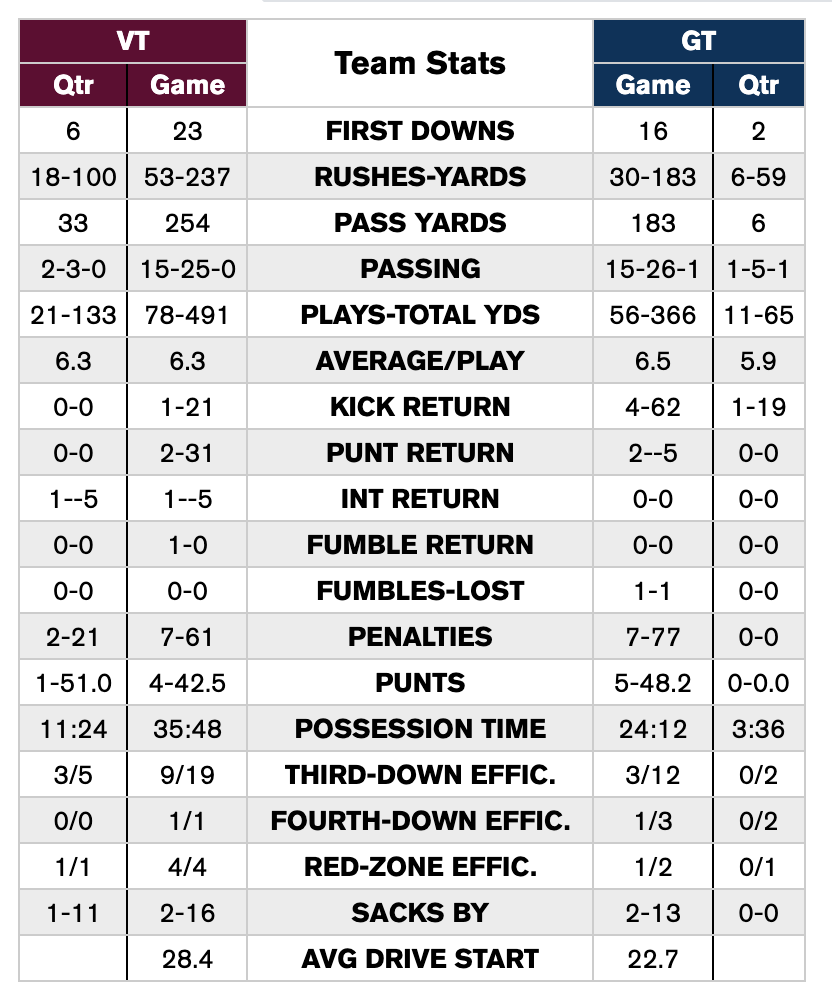 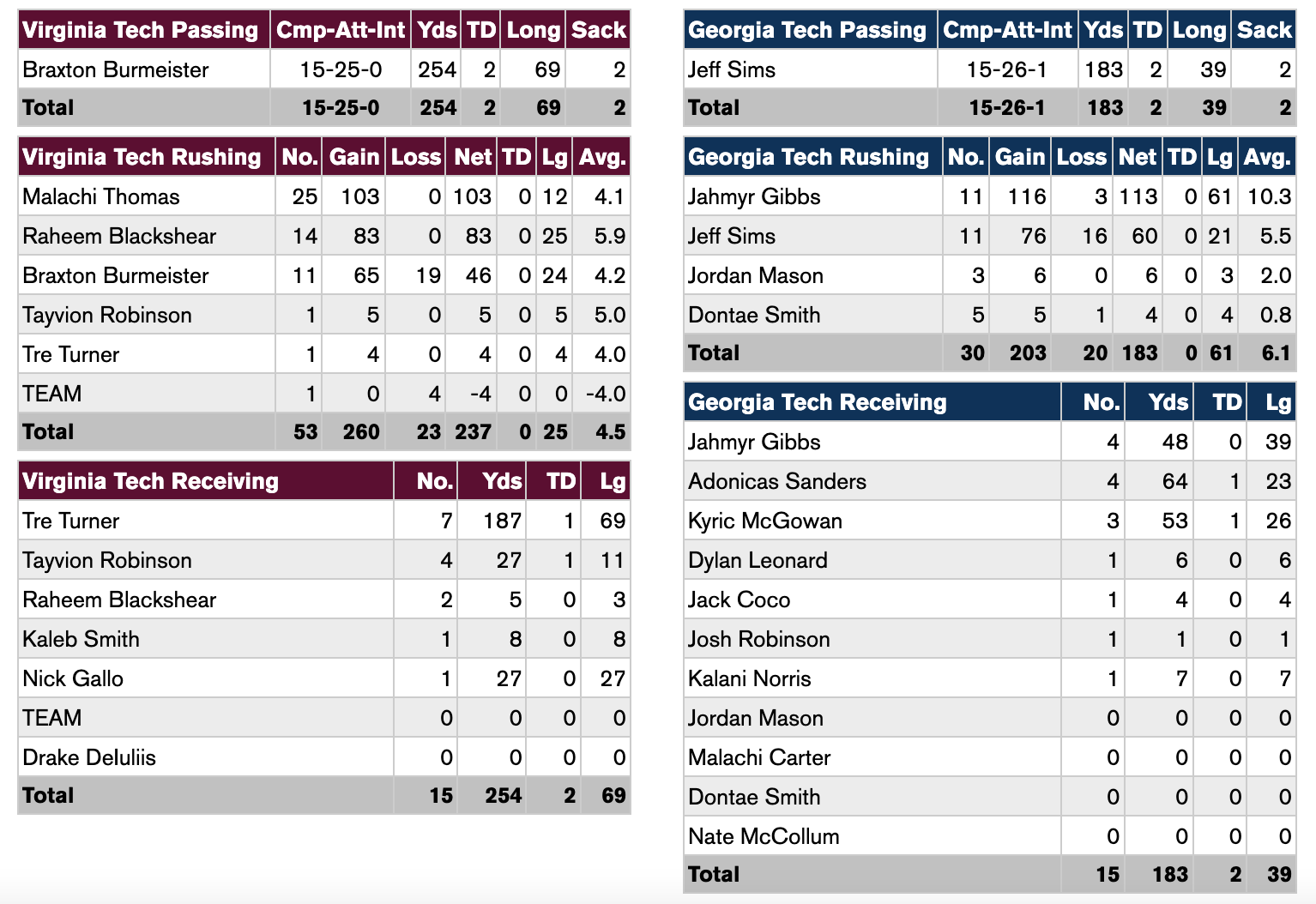