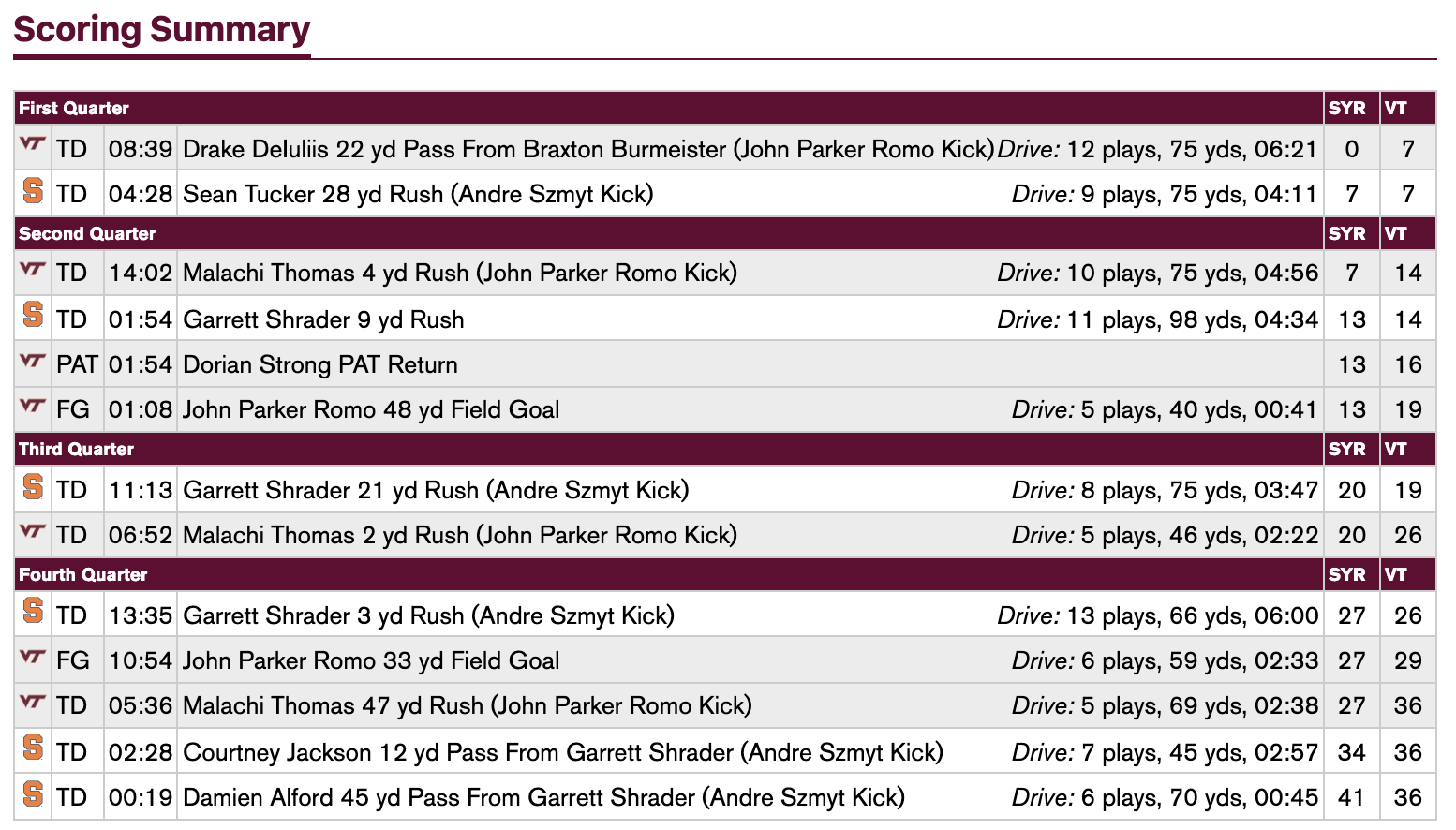 For the third time this season, Virginia Tech had a chance to win in the last minute of a football game. And for the third time, the Hokies were unsuccessful, this time losing to Syracuse, 41-36.

At West Virginia, Tech had four plays inside the ten, needing a touchdown, and failed to get it. Against Notre Dame, the game was tied until the Hokies stalled and gave the ball back to the Irish, which turned into Jonathan Doerer’s game-winning field goal.

This time, it was against Syracuse. Virginia Tech led by nine, 36-27, with six minutes to play. Syracuse cut it to two, 36-34, with two minutes to play. But, despite running 1:19 off the clock, the Hokies got stuck offensively and punted, relying on a defense that had been solid through six games but poor through four quarters on Saturday.

Justin Hamilton’s defense backed Garrett Shrader & Co. into a third-and-ten, from which he gained six yards, and then a fourth-and-four. Will Stewart’s tweet accurately describes what happened next.

VT is 2-8 on fourth down this season. Tech's opponents are 12-15. I feel that stat more than any other sums things up. Decision making, play calling toughness, scheme … they are all summed up in that stat.

Shrader picked up six. Two plays later, he found Damien Alford, over the outstretched arms of Dorian Strong, for the game-winning strike from 45 yards out.

“The guy made an incredible throw, got hit right as he threw it, dropped it right in there,” Virginia Tech head coach Justin Fuente said. “That’s a tough way to lose a ballgame.”

Indeed. Hokies have been there too many times this year. This could easily be a 6-1 team with a road win in Morgantown, a top-25 win over Brian Kelly’s bunch and a bounce back win over the Orange. Instead, Tech is 3-4 overall, 1-2 in the ACC.

The Hokies just can’t put it all together for a complete game. They haven’t been able to do it all season. And now, instead of having some momentum before going on the road, the team lost three straight home games, the third time that’s happened in Blacksburg under Justin Fuente (2018, 2020, 2021).

Below is a table that shows Virginia Tech’s record over time under Justin Fuente in one-score games and five-point games. The five-point table narrows it down a bit more and indicates a closer game. It’s also a bit more telling. The Hokies have lost their last four games closer than five points.

The Hokies have struggled in close games for a while now, and Saturday was just another (devastating) example.

Over the past few weeks, the offensive players have preached running the ball more efficiently. Tech didn’t improve in recent games. 3.2 yards per carry against Richmond and Pitt, 3.6 against Notre Dame.

Against a Syracuse defense that was No. 2 in total defense in the ACC, the Hokies exploded. They churned out 260 yards on the ground on 44 carries, equal to 5.9 yards per carry. That’s a season-high for both statistics.

They were efficient for the majority of the game, and came up with some huge plays. Tre Turner had a jet sweep for 26 yards that set up a score, while Raheem Blackshear’s long was 36 yards.

It was Malachi Thomas who impressed the most, though, and boy, did he ever.

A six-foot, 197-pound back from Hartwell, Ga., Thomas had three touches against Notre Dame and six against Pitt. Right before the game against Syracuse, the coaching staff told him he was going to get a bunch of carries.

He finished as Virginia Tech’s leading rusher with 21 carries for 151 yards and three touchdowns.

A positive from today: From my research, #Hokies running back Malachi Thomas is the first true freshman ever (since 1987, as far back as records go) to rush for three touchdowns in a game.

A few r-Fr. did it, including Michael Vick, but he's the first true freshman.

His first two scores came from four and two yards out. The third was explosive, and sent Lane Stadium into a craze.

On third-and-one from the 47, center Brock Hoffman pinned his guy to the inside, while left guard Lecitus Smith blocked his defender into the ground. The linebacker and safety were caught out of position, and Thomas took it to the house.

“I got the ball and then the o-line just made a beautiful block backside and I just hit it,” Thomas said. “I just was thinking, ‘this time, I’m not going to get caught.'”

MALACHI THOMAS WITH THE LATE 4Q TOUCHDOWN. @The__MT1 gets through the defense to maintain the #Hokies lead! 🔥🔥🔥@HokiesFB | #ACCFootball

Despite Thomas and the offense finding success on the ground, Tech couldn’t connect in the air. For the third straight game, Braxton Burmeister completed 50% of his passes or less. He was 10-20 for 177 yards and a score, a 22-yard pass to Drake DeIuliis in the first quarter, but it was too stagnant.

“I feel like once we get that first explosive play of the drive, whether it’s running or in the air, it lights a fire under the offense and that really drives us,” wide receiver Kaleb Smith, who finished with two catches for 48 yards, said.

For the first time this season, though, it wasn’t the offense that “lost” Virginia Tech the game. In the previous six games this season, Tech’s defense needed more help from its counterpart. Against the Orange, it was that unit which struggled.

Against a run-heavy Syracuse offense that entered Saturday averaging 400 yards per game, the Hokies allowed 550 yards. 314 of those yards came on the ground, and all but 28 of the yards came from Shrader or running back Sean Tucker.

Virginia Tech allowed two teammates to each rush for over 100 yards for the second straight season. Last year, it was against North Carolina with Michael Carter (214 yards) and Javonte Williams (169). Against the Orange, Shrader tallied 174 yards (averaged 7.9 ypc) while Tucker had 112 (5.6 ypc).

“He [Shrader] made a bunch of plays with his feet,” Fuente said. “I don’t know what his rushing yards were, but he seemed to have really timely plays, third and fourth down. One third and 12 or 13 that you feel like we had him hemmed up and he was able to get out of it.”

Virginia Tech only had three tackles for loss and one sack over the course of the game. Tech pressured Shrader (five quarterback hurries) but he often escaped, like Fuente mentioned. Syracuse just couldn’t miss offensively, including in the passing game.

That wasn’t a strength entering the game, but you couldn’t tell that. Shrader only completed 16 of his 34 pass attempts (47%) but he still threw for 236 yards and two scores. Ironically, they were Syracuse’s last two touchdowns.

The Hokies lost Jermaine Waller in the second quarter, who had been nicked up since the previous game against Pitt. Fuente said he just “couldn’t go.” Still, this is a defense with experience, and confidence, in the positions that Hamilton put them in.

You couldn’t tell for most of the game on Saturday. Tech made plays, but not enough, and just looked out of sync at times. Syracuse only converted seven of its 16 third downs, but was a perfect four-for-four on fourth down. The Orange had scoring drives of 11 plays (4:34 time of possession) and 13 plays (6:00), which kept Virginia Tech’s defense on the field for long stretches.

In the end, when the Hokies needed a stop, they didn’t get it.

Which leads into the question, what’s next?

Virginia Tech travels to Georgia Tech and Boston College over the next two weeks. The turnaround for the Eagles is a short one with a Friday game. The Hokies then come home for one final home game against Duke, before jetting to Miami and playing Virginia in the Battle for the Commonwealth Cup.

In team sports, sticking together is the most important thing. Kaleb Smith said the team is a family and they’re going to stick together. Malachi Thomas said there’s no doubt in his mind that the Hokies are going to bounce back next week.

But their coach is under scrutiny. Fuente seat continues to heat up. And it wasn’t hard to hear the “Fi-re Fue-nte” chants coming from the fans after Syracuse scored with :19 to play. It wasn’t like it was just a small group of students, either. It was a chorus of fans, and it was loud.

“I’m worried about giving these guys a chance to win,” Fuente said regarding his job after the loss. “I’m not – we ain’t going down that road, OK?  Everybody up and down that hallway is selling out to give these kids a chance to win, so I’m not worried about any of that. So we can’t be focused on things we can’t control. What we can control is our attitude and our effort. Our kids have been incredible with all of that. Our job now is get them to do the exact same thing for next week.”

Losing games, bad decision making and more have contributed to the chipping away of the rock that is the people who believe in him. The season is nowhere close to being over, but it’s likely to feel that way for a good portion of those who support Virginia Tech athletics. A ton of questions, with no answers.

You can’t exactly put a rock that’s in a bunch of pieces back together. At least, not in a natural way. And Saturday was just another example of that – another heartbreaking, last-second loss, and another instance of chipping away at that rock. 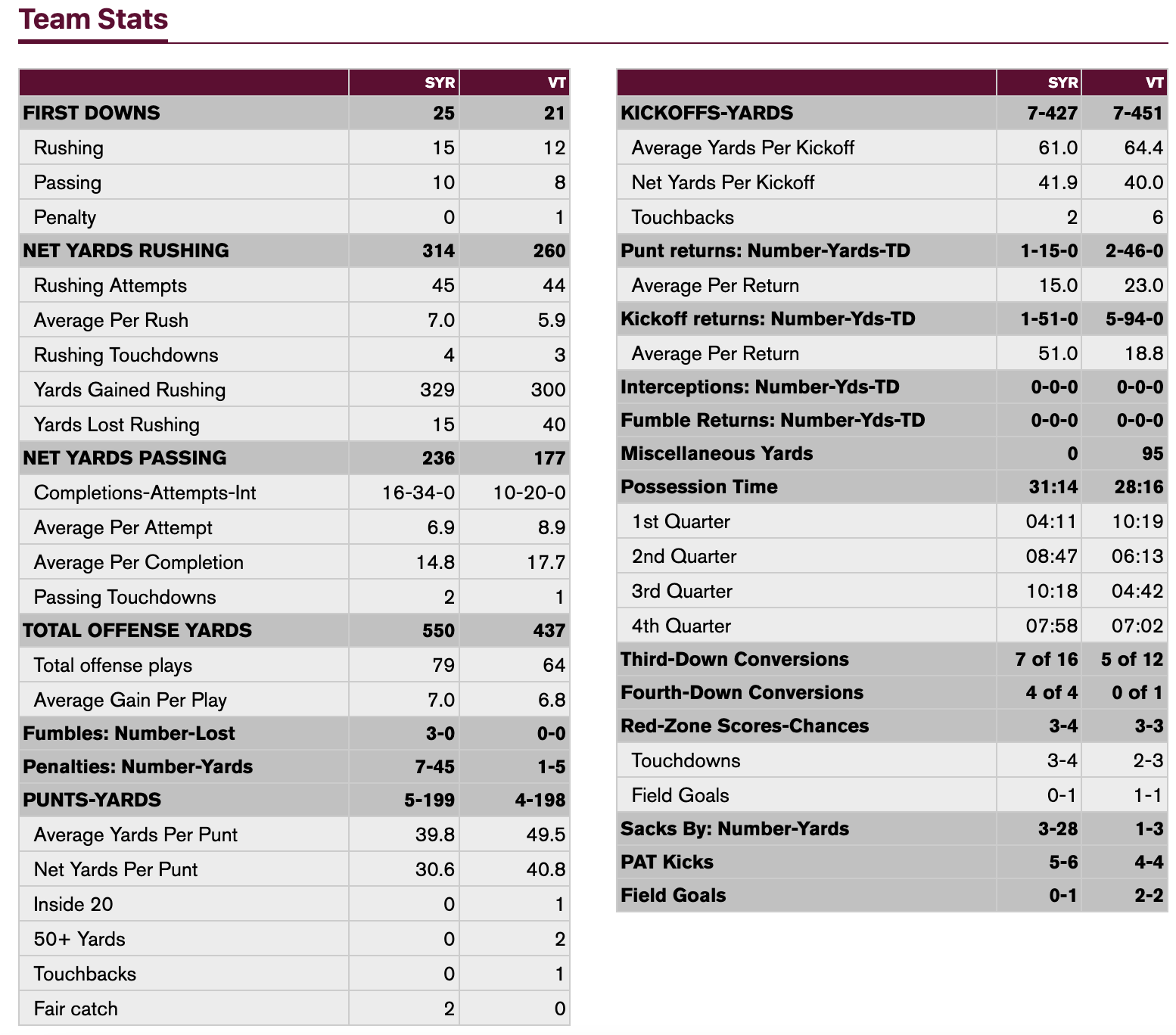 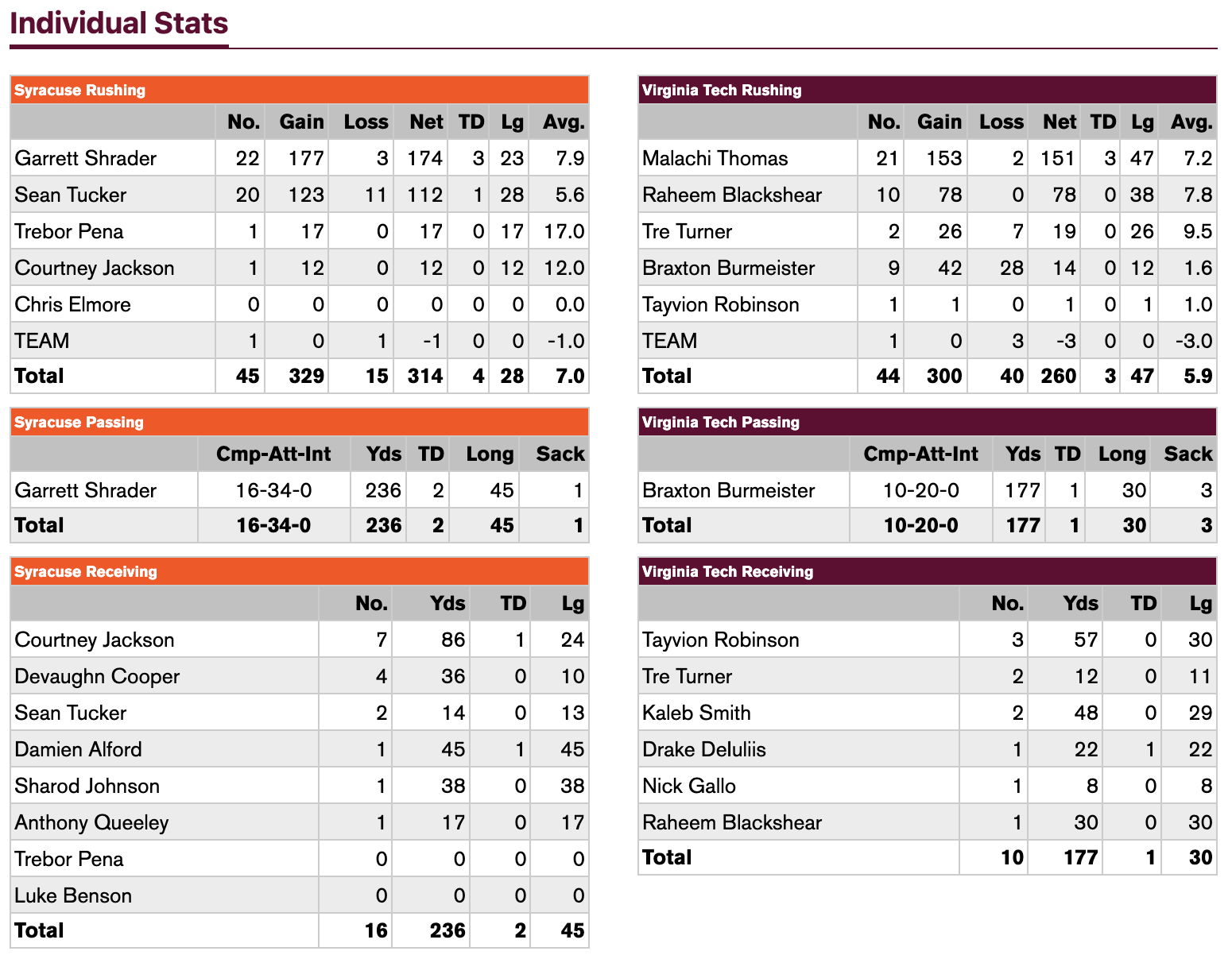 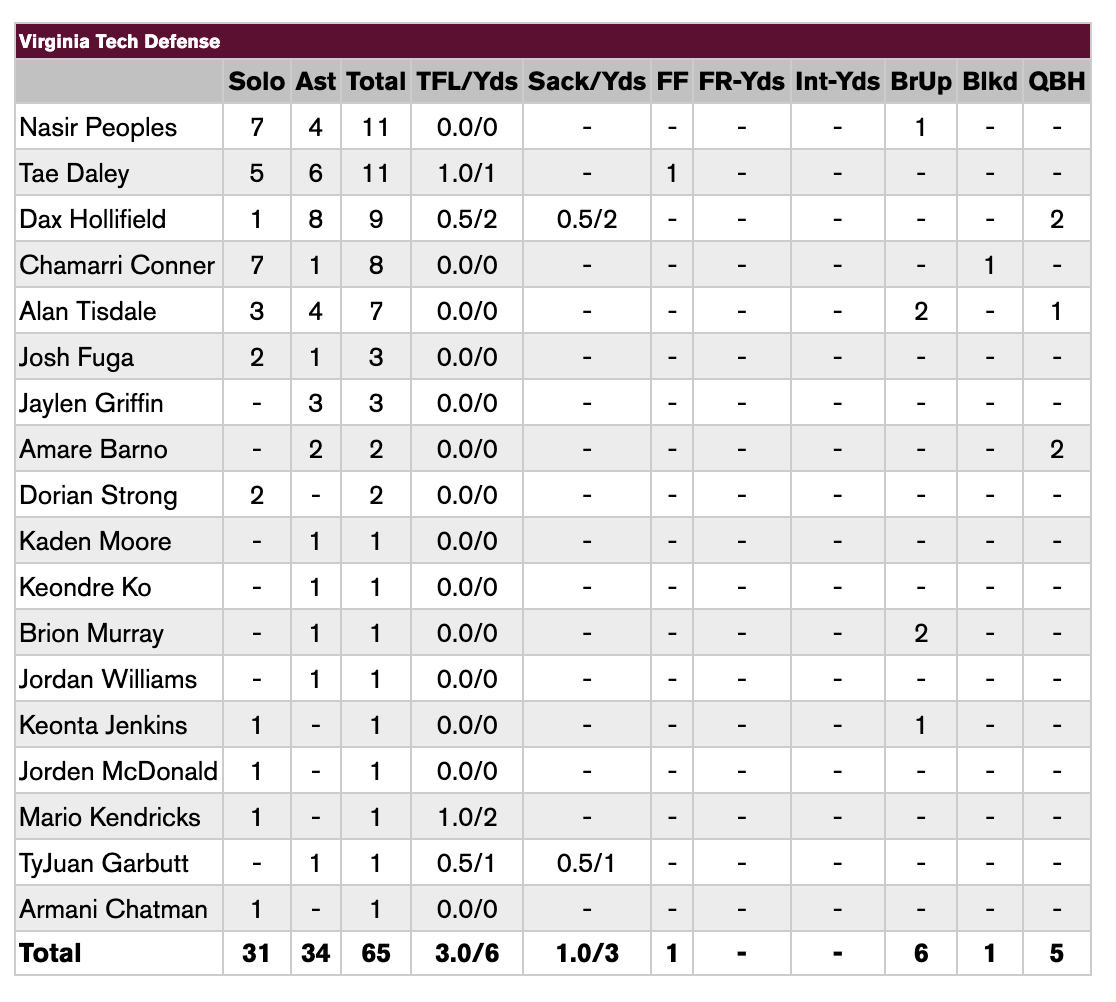 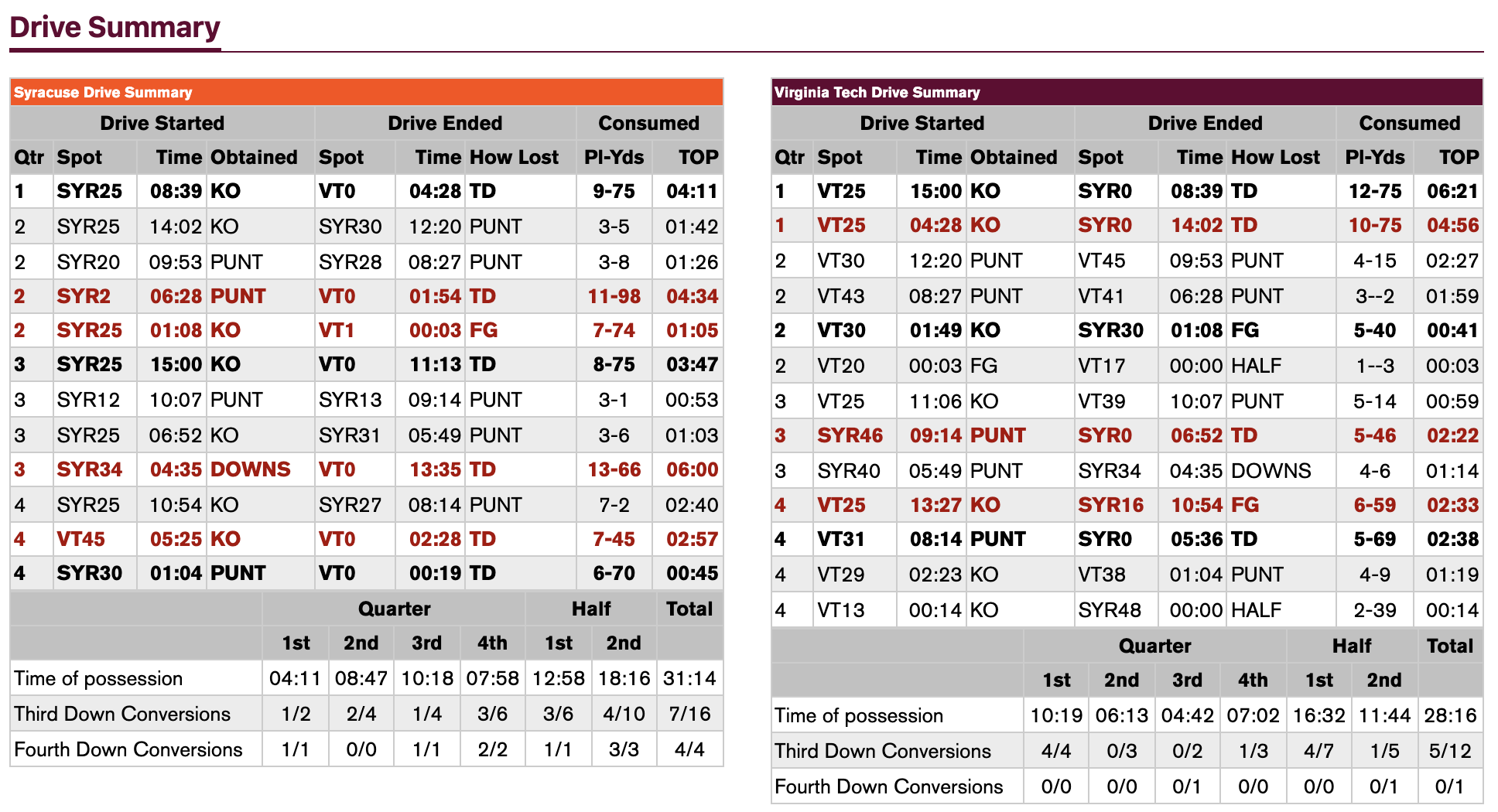