As big of a weekend as it is for Virginia Tech football, it’s an important few days for the men’s basketball program. Mike Young & Co. welcome three talented recruits, Rodney Rice, Tyler Nickel and Braden Huff, to Blacksburg for official visits over the next few days.

Rice is the No. 3 player in the state of Maryland, per 247Sports, and the No. 72 player in the country. Back on June 26, Rice announced his top six schools: Notre Dame, Alabama, Louisville, Georgetown, Maryland and Virginia Tech.

247’s crystal ball currently has three predictions, all of which lean towards the Hokies. He’s taken an unofficial to Blacksburg previously, but visits officially for the first time this weekend. He has an official visit to Louisville set for Sept. 17.

He’s a shooter, which Mike Young loves. He reminds me a little bit of Nahiem Alleyne. They’re the same size, 6-4, have similar build and a unique shooting stroke.

Like Alleyne, Rice is a spot-up shooter who can catch and fire at will. Rice can drive into the lane and create his own shot, too, which is something we’ve seen bits and pieces of from Alleyne, typically from the elbow.

Rice definitely fits the mold of wings in Young’s system, like Alleyne and Cattoor, that can move the ball, catch and shoot on the spot and occasionally create their own shot.

Young’s hiring of Jones could pay dividends in this situation, considering Rice already has a relationship with Jones built.

Nickel is the No. 4 player in the Commonwealth of Virginia, per 247Sports, and the No. 75 prospect nationally.  He visited Butler on Aug. 27 and has visits planned to North Carolina (Sept. 10) and Iowa (Sept. 17) after his trip to Blacksburg.

Here’s a look at Nickel, who can really shoot the ball: Link

At 6-8, Nickel is barely taller than Justyn Mutts (6-7) and shorter than Keve Aluma (6-9). He plays like he’s a guard, though. In a way, he reminds me of Landers Nolley, a big who often found himself out on the perimeter pulling up from deep. He also has a little bit of a post presence, though he seems to be more suited for the wing.

Like Rice, he’s a shooter. That’s the theme of Mike Young’s offense, even with the bigs. He’s an in-state kid, too, which is always important.

247 lists him as the No. 2 player in Illinois and the No. 93 player in the country, and says he’s visited four schools: Northwestern, Vanderbilt, Virginia Tech (June 13) and Wisconsin.

First impression from his film: He’s practically a point forward.

Huff is tall and lengthy and can spot up from three but also handle the ball. At :45 of the clip, he grabs a rebound and goes coast-to-coast. That’s impressive, even more so for someone of his size. He’s just that athletic.

He’s as tall as Aluma but seems more mobile and agile. It’s like he’s a guard in a forward’s body. Huff can catch the ball on the outside and attack the rim, and he’s a solid distributor, too.

It’s easy to see why Young and Tech are pursuing Huff. He’s a unique specimen, kind of Nikola Jokic-esque, where he can body people in the paint but also attack off the dribble and hit tough shots from the wing.

The Scholarship Outlook (And Clarification) 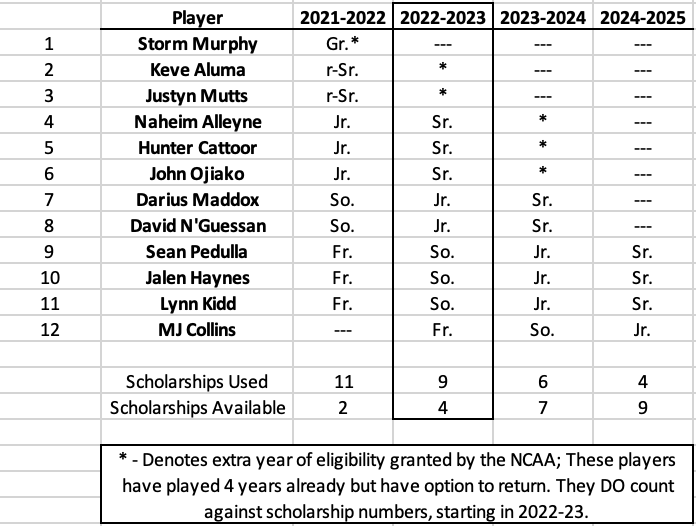 The Hokies have four scholarships open for next season (2022-23) and, thanks to the NCAA granting players an extra year due to COVID, could still have Aluma and Mutts on scholarship. Nahiem Alleyne and Hunter Cattoor will be fourth-year players in 2022-23 (with an extra year thanks to COVID, should they want to use it).

It’s here that the scholarship situation gets complicated. With COVID, the NCAA granted all student-athletes from 2019-20 an extra year of eligibility. The 2020-21 athletics season was essentially a freebie where that year of eligibility wasn’t counted against an athlete. Because of rollover of scholarships, the NCAA allowed all programs to go over the scholarship limit in 2020-21 to keep those players with an extra year, and it’s the same situation in 2021-22.

Starting in 2022-23, however, while student-athletes have the opportunity to take advantage of the extra year of eligibility, it counts against scholarship numbers like normal years. Storm Murphy doesn’t count against Tech’s scholarship numbers this season, but Keve Aluma and Justyn Mutts would next season, should they decide to return.

For those still confused (It’s complicated, don’t worry), I encourage you to check out this story from John McGonigal of the Pittsburgh Post-Gazette on how it impacts college football’s 85-man scholarship limit. It’s the same for college basketball, except there are only 13 scholarships (15 for women’s hoops).

Should Aluma and Mutts decide not to return next season, that would leave David N’Guessan, John Ojiako, Lynn Kidd and Jalen Haynes as the only players 6-8 or taller. That seems like the perfect situation for Tyler Nickel and Braden Huff, both of which who would fit right in to Young’s offense.

Rice could have a big role on this Tech team after Alleyne and Cattoor depart, and he’d compete with Darius Maddox and Collins for that spot on the wing.

Overall, it’s an important weekend ahead for the Hokies with three huge prospects in town. All three are great matches for Virginia Tech’s style of play and would really help Young & Co. replenish the depth at forward and wing over the next two seasons.