The 2021 ACC Football preseason poll was released on Monday morning, and Virginia Tech was picked by the media to finish third in the Coastal Division. For the fourth season in a row, Clemson is the favorite to win the Atlantic Division and the ACC Championship Game. 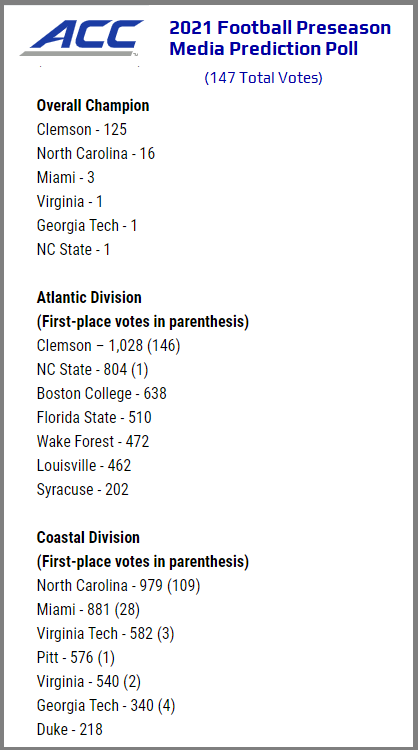 North Carolina received 109 of the 147 votes to win the Coastal Division. The Tar Heels finished fourth in the conference in 2020 at 8-4 (7-3 ACC). The last time UNC was picked to win the division was 2016, when it finished second behind the Hokies in Justin Fuente’s first season. Virginia Tech and North Carolina will square off in the season opener on Friday, Sept. 3 in Lane Stadium.

The Hokies finished 5-6 (5-5 ACC) in 2020 and capped off the season with a 33-15 win over rival Virginia. Tech travels to Miami (28 votes to win Coastal), Virginia (2) and Georgia Tech (4) this fall. Pitt (1), Duke and North Carolina all venture to Blacksburg. The Hokies’ cross-division opponents for 2021 are Boston College (picked third in Atlantic) and Syracuse (last).

The media has correctly picked the ACC Championship Game the past two seasons. Clemson defeated Virginia in 2019 and Notre Dame in 2020.

It’s been almost ten years since the media Virginia Tech to win the Coastal Division in 2012.

There were no divisions in the ACC in 2020 due to COVID-19, but Virginia won the Coastal in 2019 after being picked to do so. Two of the last three seasons with divisions, the team projected to win the Coastal did so (Miami in 2017).

North Carolina has only won the ACC Coastal Division once: 2015.

For all preseason media predictions dating back to 2005, click here.

For the full press release from the ACC, click here.

Mitchell, the 6-foot-three tight end from Big Stone Gap, Va., racked up 26 catches for 435 yards in 2020. The junior has 11 total touchdowns (six reception, five rushing) in four years in Blacksburg. On July 23, Mitchell was named to the Mackey Award Watch List, annually given to the nation’s best tight end.

A six-foot-six redshirt junior from Blythewood, S.C., Barno led the ACC and the Power Five in tackles for loss in 2020 with 16.0. An All-ACC Honorable Mention nominee last season, Barno recorded 43 total tackles, including 28 solo. Barno started at defensive end last year after making the transition from linebacker.

The complete team, with total votes in parenthesis:

2021 Preseason ACC Player of the Year

A junior from Indian Trail, N.C., Sam Howell received 114 of the 147 (77.6%) of the votes for ACC Preseason Player of the Year. As a sophomore in 2020, Howell tallied a conference-best 3,586 passing yards, good for fourth in the nation. He also led the ACC with 30 touchdown passes last season, which ranked sixth in the FBS.

For the full press release from the ACC, click here.