In a disappointing outcome for Hokie fans, the #15/#13 ranked Virginia Tech Softball team dropped all four games to the Notre Dame Fighting Irish in Blacksburg this weekend. The Irish swept the Friday doubleheader 2-1 and 6-5, then won a nine-inning contest Saturday morning 4-3, and the Sunday finale 3-1.

The results continued a recent trend of Hokies frustration against the Irish as Notre Dame has now won 18 of the last 19 contests played between the two schools.

The loss drops the Hokies (28-11, 19-11 ACC) to 4th place in the ACC and most likely sets up a rematch with the Irish in the first round of the conference on tournament Thursday, May 13th in Louisville. 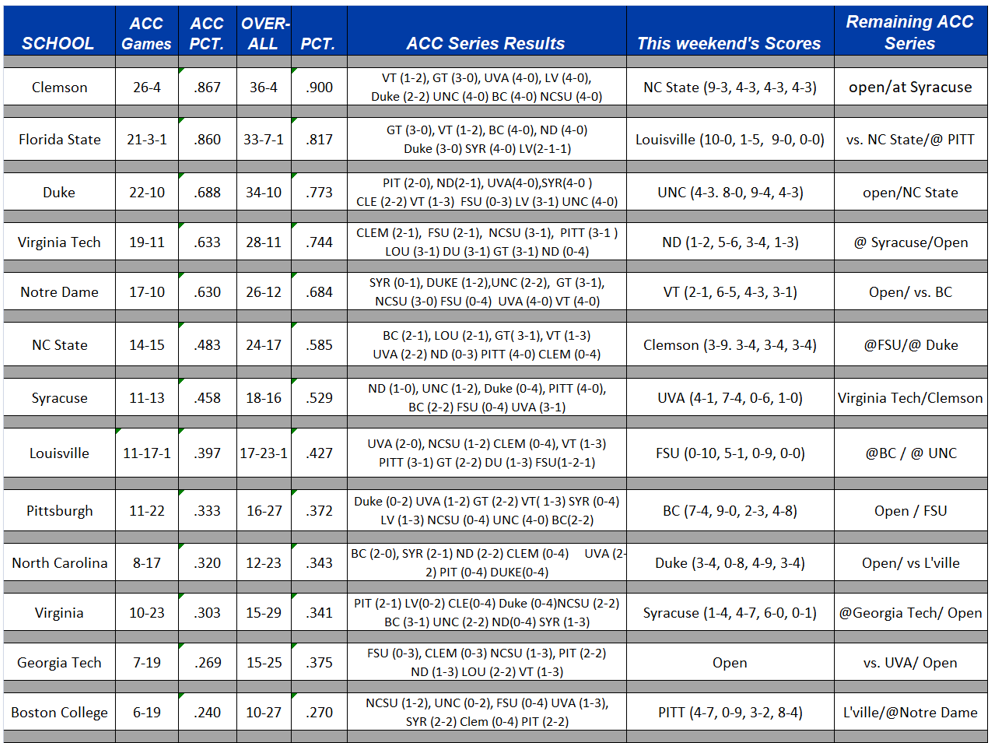 Prior to the weekend, the Hokies were entertaining hopes of hosting an NCAA Regional for the first time in program history, but those hopes appear to have been dashed, with the Hokies projected RPI now falling into the low 20s after the sweep. Only 16 schools get to host, and although Covid has thrown a few twists into the selection process, Virginia Tech is now a real longshot.

Although the losses themselves were disappointing, it was the way they occurred that had Hokie fans scratching their heads.  A Virginia Tech team that came into the series leading the ACC in hitting with an average of .312 could only manage a .211 mark (24 for 114) against Notre Dame. And of the Hokies 24 hits, only 3 of them went for extra bases (a triple by Kelsey Brown and doubles by Addy Greene and Jayme Bailey).

The Hokies uncharacteristically struggled on defense as well, committing seven errors in the series that led to seven unearned Irish runs – runs that were at a premium all weekend.

Virginia Tech’s lack of production surprised Coach Pete D’Amour, who had seen the Hokies blast the ball all week in practice. He was quick to take responsibility for the weekend. “When teams go on a losing streak like the one we had this weekend,” D’Amour said, “it’s on the head coach. I didn’t do something to prepare the team as well as we should have been prepared. I have to figure out where the disconnect is offensively. Why are we able to be a potent offense in live scrimmages during the week and struggle to score runs on the weekend? Is it pressure, do we revert to old habits in games, do we swing too much during the week, or are we mechanically unsound? And we also need to find ways to shore up our infield defense.”

On the positive front, the Hokies welcomed back freshman Cameron Fagan to the lineup, and she picked up where she left off – hitting .438 (7 for 16) for the weekend. Leadoff hitter Kelsey Brown matched those stats  for the weekend and added two more stolen bases to her team leading total of 25. (Brown has yet to be thrown out this season).

Kelsey Brown’s speed is simply amazing, as she showed on this suicide bunt that quickly produced a second Hokies run on the play.

“Kelsey has game-altering contact,” says D’Amour.  “If she makes contact, there’s a good chance she’ll be on base.”

Unfortunately, other than Fagan and Brown, the rest of the team hit a paltry .122 (10 for 82) in the series, leading to the Hokies leaving 28 runners on base.

In the circle, Keely Rochard deserved much better than the two losses that she was saddled with this weekend.  She pitched 17 strong innings, only surrendering two earned runs and striking out 26.  Freshman Mackenzie Osborne threw 9 solid innings, only allowing one run until she was tagged for two 6th inning HRs in Sunday’s game.

Now the Hokies will need to regroup before traveling to Liberty for a Wednesday non-conference contest.  The Flames (32-12) are no slouch, with an RPI similar to the Hokies, and are riding an 11-game winning streak (going into a Monday contest with Bellarmine).

D’Amour recognizes his team is at a crossroads. “You can experience multiple highs and multiple lows in any particular year,” he said. “We’ve had a lot of highs this year already and this is certainly a low. I told the ladies after the game we can go one of two ways from here. We can let this weekend crush us emotionally or we can keep plugging away and get better. We have the pitching that will give us a chance to win the rest of the year, but we need to figure our offense and defense out.”

Wednesday’s game with the Flames is scheduled for 6:00pm and will be shown on ESPN+.