The #15/#13 ranked Virginia Tech Softball team welcomes the Notre Dame Fighting Irish to Blacksburg this weekend for a critical four game series. The Hokies will be going for their 8th consecutive ACC series win.

Per the hokiesports.com schedule as of this writing:

Also per HokieSports, approximately 150 fans will be admitted on a first come-first serve basis.

These games are very important for the Hokies if they wish to host Regional games in the NCAA Tournament.

A preliminary list of 20 regional host sites will be released by the NCAA next week, which will eventually be narrowed to 16 on Selection Sunday, May 16th. Virginia Tech currently has a very solid resume with an RPI of 15, strength of schedule of 38, and an 18-5 record versus the Top 100, but they need to keep the momentum going.

Notre Dame comes to Blacksburg with an overall record of 22-12 and a 13-10 mark in the ACC. The Irish are a perfect 10-0 at home but are 9-10 on the road. They come to Blacksburg on a five-game winning streak after sweeping UVA last weekend in South Bend.

The Irish, who are third in the ACC in hitting (.302), have two of the top four hitters in the league – Senior Abby Sweet (.477) and Junior Emma Clark (.413), both California natives. They typically bat first and second in the Irish lineup and have a combined total of 33 stolen bases this season.

Sweet leads the ACC in hitting, hits (51), and doubles (13), and on base percentage (.545). She led the ACC last season as the toughest player to strike out (68 at bats for each strikeout) and simply finds a way to get on base. She has been hit by pitches 62 times in her 168 career games, including four times in an earlier game versus NC State.

True freshman Karina Gaskins, whom her coach calls “one of the most powerful hitters in the country,” leads Notre Dame in home runs with eight. She is hitting .338.

In the circle, the Irish are primarily a two-woman show with Senior Alexis Holloway and junior Patricia Tidd combining for 32 of the Irish 34 starts this season.

Holloway, who led the team in ERA last season at 1.09, has started 15 games and has a 2.62 ERA with 87 strikeouts in 88 innings. She limited the Wahoos to one earned run in each of her complete-game wins last weekend. Tidd has started 17 games and leads the Irish in ERA this season at 2.21.

The Hokies are coming off yet another series win – this time over Georgia Tech. Hokie batters hit .347 for the series, blasted nine home runs and scored 22 runs in the last two games.

Kelsey Brown continues to lead the Hokies in hitting with a .413 average, and it should be quite the showdown at the top of the batting orders this weekend. Brown is also a perfect 23 for 23 in stolen bases this season.

Freshman Addy Greene has been on fire recently, hitting .517 (15 for 29) with ten RBIs in her last ten games, to increase her season batting average to .362, and Jayme Bailey continues her solid year with a .336 average.

Cana Davis had a stellar weekend against Georgia Tech, going 6 for 11 with a double and two tape-measure HRs, and Kelsey Bennett went yard twice as well, increasing her team leading home run total to ten.

Keely Rochard continues to be the Hokies’ rock in the circle, throwing her 6th career no-hitter in her last outing, but Freshmen hurlers Ivy Rosenberry and Mackenzie Osborne each recorded wins against the Yellow Jackets, which is a great sign for the rest of the season.

In spite of the difference in record, these two teams appear to be closely matched, and Virginia Tech Coach Pete D’Amour knows the Hokies will have their work cut out for them this weekend.

“Notre Dame will be another good test for us,” D’Amour said. “They’re at the top of the league offensively and they have two really solid pitchers. We need to be ready to play from the get-go this weekend.” (That’s a reference to the Hokies not being ready from the get-go against Georgia Tech last weekend.)

The forecast calls for upper 50s all weekend with some rain possible on Saturday. Check HokieSports for any scheduling adjustment (and we’ll also post them on the Olympic Sports Board). 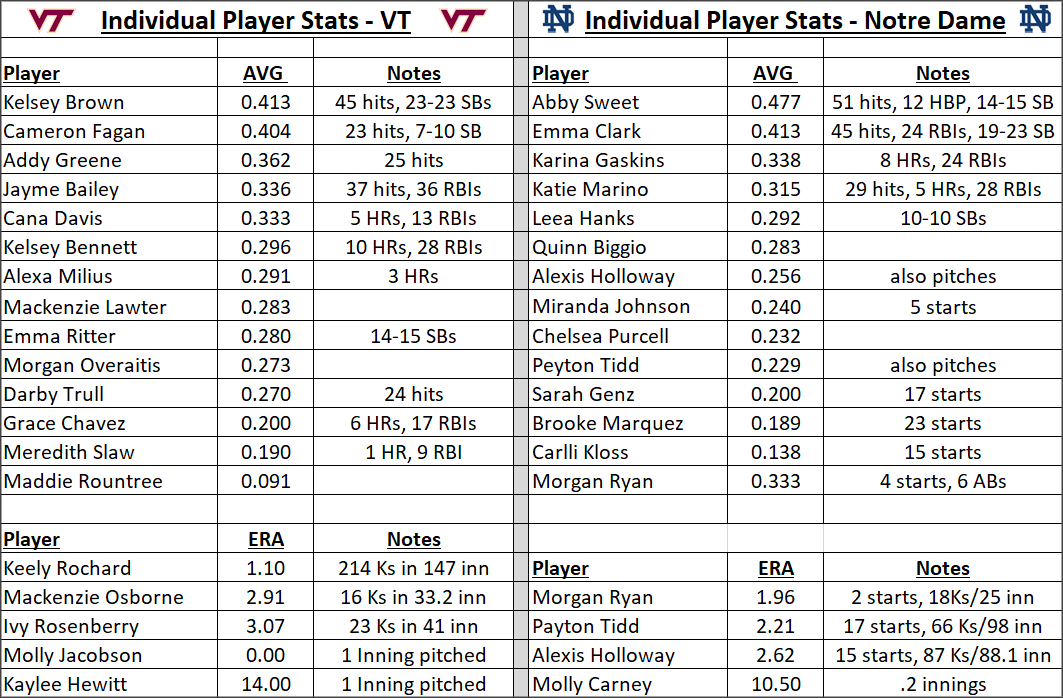