The Virginia Tech community is still buzzing from Tuesday’s announcement of the $400 million Reach for Excellence fundraising campaign for athletics.

On the TSL Podcast yesterday, Tech Sideline founder Will Stewart had the opportunity to learn more about the initiative from Virginia Tech Vice President for Advancement Charlie Phlegar and Senior Associate Athletic Director Brad Wurthman. The pair appeared on Episode 177 of the TSL Podcast, and here are some notes and highlights from their appearance.

The University’s Commitment to Athletics

The Reach for Excellence campaign looks to raise $400 million over the next eight years to fund improvements in facilities, coaching, staffing and the student-athlete experience.

One of the more important notes that came out of Tuesday’s press conference didn’t come from anyone in the athletic department, but instead from university president Tim Sands.

Sands announced that the university’s goal is to advance the athletics budget into the top third of the ACC. In recent years, the budget had fallen into the bottom half of the ACC and all Power 5 athletic departments.

“That alignment [of athletics and the university] is critical to what we’re trying to do now and the future of the athletic operating budget,” Phlegar said. “That alignment is essential to what we’re trying to do, and I have one hundred percent confidence that the alignment is in place. Because that alignment is in place, we’re going to be very, very successful financially with the goal that Whit [Babcock] stated yesterday, which is to be in the top third, where Virginia Tech belongs, of the ACC operating budgets for the athletic department.”

There has been criticism of the university since Sands took over as president in 2014 regarding his overall commitment to athletics. However, this announcement not only shows a financial commitment to the department, but also may quiet some of those critics.

This announcement was planned for last year, but COVID-19 threw a wrench into the plans to take on this major fundraising campaign. The pandemic compounded the department’s issues with the major revenue shortfall caused by the inability to have fans in the stands for football and men’s basketball.

Director of Athletics Whit Babcock announced on Tuesday that the 2020-21 department revenue shortfall due to COVID-19 is $47 million, but has been able to cut down the operating deficit to a more manageable $15 million. The new commitment from the university should help in the process of moving past the pandemic and keeping the financial future of the department strong.

Continuing to Upgrade the Football Program

For almost two decades, Virginia Tech football was in the mix of teams with an opportunity to compete for a national championship. However, times have changed, and the reason why is clear.

Many of today’s powerhouses continued to commit money and resources to the football program, while Tech lagged behind, and the results have followed for the past few seasons.

“I met with Justin [Fuente] probably five times in the 30 to 60 days after the whole Baylor thing happened, just to understand him and what we were up against as a university,” Phlegar said, referring to Fuente being courted by Baylor in January of 2020 to take over their vacant head coaching position. “It opened my eyes to the issues that are being addressed now and were announced yesterday. Our operating budget is not competitive, we have to be more competitive and in order to do that, this is what it’s going to take.”

On Tuesday, Fuente spoke to reporters and said that the program will use the money raised from the campaign for five categories: recruiting, assistant coaches’ salaries, additional staffing, player development and facilities.

Upgrades have already started for many of the facilities that the football program needs to keep up with powerhouses in the sport. These include the recent upgrades to the weight room and meeting rooms in the Merryman Center, as well as the addition of the Student-Athlete Performance Center, the soon-to-be-completed player’s lounge, and the dormitories in the Creativity and Innovation District that will house freshman athletes, including football players.

These recent facility enhancements, paired with the $30 million earmarked for football from the Reach for Excellence campaign should put the Hokies on the right track towards being competitive on the field and on the recruiting trail once again.

“We’re really fortunate with Coach Fuente because he doesn’t ask for glitz and glamor. He asks for things that directly impact our student-athletes and directly impact the program,” Wurthman said. “At first, the priorities were, we need to upgrade the weight room because, right or wrong, the weight room was not up to par with our competitors and so showing that off to recruits was not a great point.”

This new commitment to football from the athletic department and the university are with the hopes of competing for national championships once again, according to Babcock. If allocated correctly, these resources could be the launching point that the program needs.

“This is about bolstering the program in a way that has not happened historically, that gives us an opportunity to be competitive because we already have facilities not that have just opened that are best in class,” Wurthman said. “Whit said it yesterday about the concept of going from a challenger to a champion brand. You have to have the resources to become a champion and we’re getting there.”

Out of everything announced during Tuesday’s press conference, the item that generated the most buzz was the renovation of Cassell Coliseum and the renderings of what it could look like. 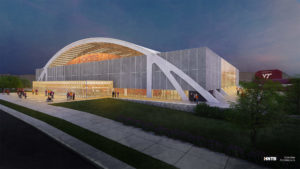 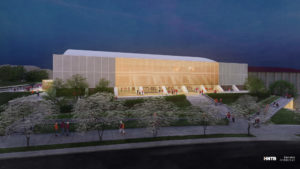 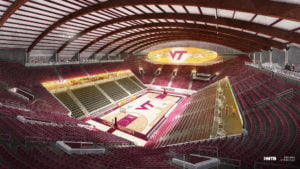 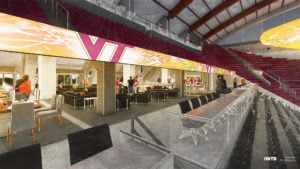 There has long been talk of renovations to the Hokies’ basketball arena, but now plans have finally been announced, with a $75 million renovation expected to be completed within four or five years. The renovations would slightly decrease capacity (to 8,500-9,000 fans from the current listed capacity of 9,275) but would overhaul the entire outer aesthetic of the arena, adding more suites and a large new video board.

“Virginia Tech has never raised $50 million for a building ever in its history, so this will require a lot of work and sacrifice and dedication from the Hokie Nation to pull this off,” Phlegar said. “The older generations, which I’m getting into, we love Cassell Coliseum. It’s an important icon of this area and the people that I’ve shown the renderings to, they think it’s fantastic and they’re excited about it.”

Both the men’s and women’s basketball programs made the NCAA Tournament last year, for the first time in school history. Just over a decade after getting a major upgrade to their practice facilities and offices with the Hahn-Hurst center, the programs will finally get the renovation of Cassell Coliseum that matches their recent success.

“Mike Young is the perfect coach to be here and he’s all in,” Phlegar said. “He loves the venue, and he loves the home-court advantage, so this will be a big win for Tech when we get it done, which Whit said yesterday, let’s get it done and back in there within the five-year window, which I believe we can.”

Tech Sideline thanks Charlie Phlegar and Brad Wurthman for appearing on the TSL Podcast. Here’s the full podcast video, which is indexed by topic. If you prefer to access audio-only, that can be done here.