No. 17 Virginia Tech (19-10, 14-7 ACC) is set to host Georgia Tech (15-13, 12-9 ACC) this weekend in a pivotal conference matchup. The three-game series will take place from English Field at Atlantic Union Bank Park with the first pitch taking place on Friday at 6 p.m.

Here are the five things to watch this weekend.

Entering the series, Virginia Tech currently leads the ACC Coastal by two games ahead of Pitt and Georgia Tech. The Hokies have been hot, winning eight of the last nine in the ACC including sweeps of Pitt and Wake Forest. 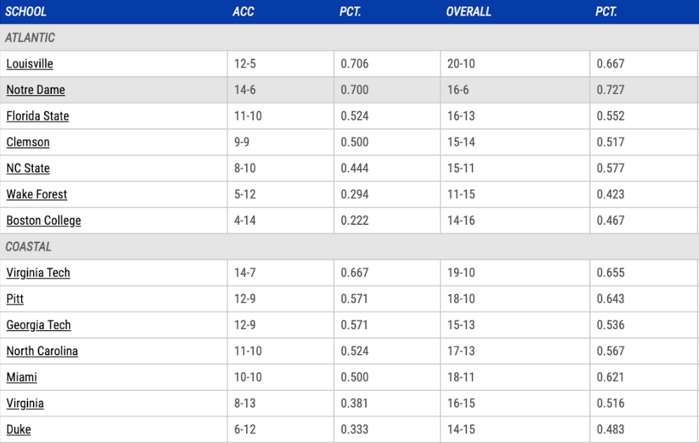 We’re just outside of a month from the ACC Baseball tournament which takes place in Charlotte from May 25-30. The tournament splits teams into four groups of three based on seeding, and they compete in a round robin format before the four group winners face off in a single elimination bracket.

Gavin Cross and the Hot Bats

Gavin Cross has been a force for Virginia Tech all year long. The freshman from Bristol is hitting .404 this season with 46 hits, nine home runs, 28 RBIs, and a .459 on base percentage, leading the Hokies in all categories.

Last week, Cross was recognized as the ACC Player of the Week. He hit for the Hokies’ first cycle since Tim Smalling back in 2010, going 4-for-6 with seven RBIs in the 15-5 win over ETSU. In the series against Wake, Cross was 6-for-14 (.429) from the plate with two home runs.

Cross wasn’t the only Virginia Tech batter raking against the Demon Deacons. The Hokies put up 32 runs in the sweep on the road, including a 16-4 barrage in game two of the series. The Hammerin’ Hokies were in full effect, blasting 10 home runs over those three games, setting a program record in the ACC in the process.

Some of Virginia Tech’s biggest names have been banged up over the last few weeks, but day-by-day the team is returning to full form. After missing the first 24 games of the season with a shoulder injury, the Hokies welcomed do-it-all star Nick Biddison back to the lineup.

In his four games since his returning from a shoulder injury, Biddison is hitting .278 with two home runs and a .409 on base percentage. His presence atop the lineup and in multiple positions in the field will continue to pay dividends down the stretch.

John Szefc and Co. also saw Chris Gerard return to the mound after missing the last two starts with a pulled groin. Gerard looked a tad off in his first start back against Wake, lasting 4.2 innings and giving up five runs on eight hits, one walk, and five strikeouts. He can be expected to return to form this weekend as the ace of Virginia Tech’s staff.

Stability in the Bullpen

When Virginia Tech went through a minor skid last month losing back-to-back series against Florida State and Clemson, the bullpen had its issues. Gerard’s return to the starting rotation goes a long way in improving Virginia Tech’s bullpen. Now, Shane Connolly can return to his role in long relief or closing out games instead of filling in as a third starter.

Pitching coach Ryan Fecteau has also seen the emergence of Griffin Green and Graham Firoved late in games. In his last two ACC appearances, Green has compiled 5.0 innings where he’s allowed just one hit, one walk, and struck out seven. Meanwhile, Firoved has locked up two saves in his last two ACC appearances. The hard-throwing right-hander is at his best when he can go full force for one inning. That’s what he did when he shut the door on Wake with a scoreless ninth inning en route to the 10-9 win and the sweep in the process.

This upcoming series is critical not just for the ACC standings, but more so if the Hokies want to host an NCAA Regional for the first time since 2013.

Typically, the top 16 teams in the country are awarded a regional host site when the tournament field is announced on Memorial Day. However, this year the regional locations will be chosen on May 10, three weeks ahead of time, in order to set up COVID testing at the site.

Teams were required to submit a bid to host a regional by April 12. Szefc confirmed that the Hokies did submit a bid.

A number of considerations will go into determining the host sites with on-field performance expected to be the top priority. Now, with the host sites being chosen before the conclusion of the regular season, resumes are due sooner for those teams on the fringe like the Hokies. Baseball America had Virginia Tech as the last team hosting a regional in its most recent projection.

A series win over Georgia Tech would go a long way in moving Virginia Tech up from its current RPI ranking of No. 27.