Virginia Tech baseball has hit a skid recently and no longer finds itself in the top 25 rankings. The Hokies are now 10-8 and 6-6 in the ACC. Over the last 10 games, Virginia Tech is just 3-7 including losing two of three last weekend to Clemson.

Now after no mid-week games, the Hokies are gearing up for another series on the road at Pittsburgh. The Panthers usually find themselves in the bottom of the ACC, going 19-44 in conference over the past three. However, this year Pitt baseball has seen a resurgence with an 8-4 ACC record that sits atop the Coastal Division.  They are 12-5 overall. 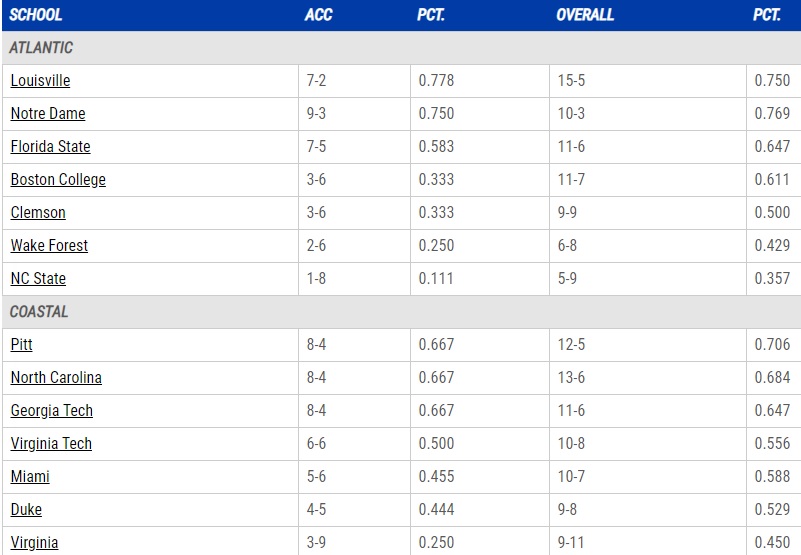 It speaks to the depth of the league this season.

“I think it’s the deepest the league has been since I’ve been in the ACC, period,” head coach John Szefc said. “When I was first at Maryland, Maryland was in the ACC in ‘13 and ’14, and the league is way deeper than it was then.

“The league is very deep in pitching. It’s a different league now. It’s better, it’s a technology driven league, it’s a pitching driven league. You have teams that have way better facilities now than they have been. It’s evolved, it’s changed for the better. You just have to keep surviving it and working your way through it.”

First pitch on Friday is scheduled for 3 p.m. and will be available for streaming on ACC Network Extra. Here’s four other takeaways from Szefc’s Thursday media session.

There were a number of updates on some of Virginia Tech’s most important players and their availability for the upcoming series. Usual Sunday starter Anthony Simonelli will make the trip and is expected to pitch this weekend after missing his last two starts with an oblique injury. However, Saturday starter Chris Gerard did not make the trip. Gerard pulled his groin in his last start, so he will be unavailable.

“Simonelli is back on this trip with us which will help us,” Szefc said. “Gerard is not because he pulled his groin last week. That’s not good, but that’s probably a week or so.”

Meanwhile, Nick Biddison is nearing a return. After hitting .344 in 16 games in 2020, Biddison has missed the entire 2021 campaign so far with a shoulder injury.

“I would say he’s in the final stages of his return,” Szefc said. “It’s all prescribed by the doc and the surgeon that did his surgery. He’s been following that with his rehab, and we look forward to having him back at the end of the first week in April. It will be a big boost to the team.

“The last thing that’s going to come for him is what he’s working on now which is facing live pitchers and getting his eyes adjusted to velocity and spin. I think defense and baserunning wise, he can borderline play right now if he was cleared, which he’s not.”

Virginia Tech has still had an issue finding depth from its bullpen. Beyond Shane Connolly, Jaison Heard, and Matthew Siverling, the Hokies haven’t found another key piece who fits in the same category of those guys.

Heard did the heavy lifting after Gerard exited on Saturday against Clemson. He pitched 5.1 innings in relief, allowing five hits, two runs, no walks, and five strikeouts. Connolly started Sunday’s game against Clemson in place of the injured Simonelli and was masterful, going 7.0 innings with three hits, one run, no walks, and 11 strikeouts. The Hokies surrendered a 2-1 lead in the eighth when James Parker launched a go-ahead three-run home run with two outs.

“The reason we won last Saturday’s game is because Heard did a great job of coming out of the bullpen,” Szefc said. “He went for 5.1 innings on the road. Typically he wouldn’t have to do that, but because of an injury he did. The weekend before that when Simonelli gets hurt, our bullpen gets taxed there. If those guys are healthy, Shane Connolly doesn’t start last weekend against Clemson. When you take Connolly out of the bullpen and you’re starting him, it makes your bullpen weaker. Two pretty substantial injuries have dramatically taken a tax on the bullpen.”

Earlier in the season in a 14-7 loss to Florida State, Virginia Tech set a new record by using 12 pitchers in the ball game. At some point, Szefc and pitching coach Ryan Fecteau need one of the fringe guys in the bullpen to elevate themselves to a position where they can be fully trusted.

“We had two intrasquad games the last two days when we weren’t playing,” Szefc said. “Trying to make sure guys were coming in out of the bullpen for their outing and making sure they’re able to attack hitters right out of the gate. The point being constantly made that it’s not OK to go to three balls on hitters. It’s not OK to come in and issue a four-ball walk or a walk in general.

“In general, just trying to make sure guys are attacking hitters and not giving up free bases when they come in the game. If you look at how we lost that game on Sunday, it wasn’t necessarily the two-strike home run, but it was the walk and hit by pitch that were ahead of it that hurt that situation more than it should have been.”

There are no secrets anymore in college baseball. Every team has access to all kinds of video in order to form a scouting report on its opponent. It’s an ultimate chess match of who can put the video to best use.

“It’s really one adjustment after another,” Szefc said. “For instance, we’ll face a couple arms this weekend that are really high carry fastball guys. Meaning that as their velocity gets to the plate, it actually appears to rise in the zone. Kurt [Elbin] has done a really good job of preparing our hitters and explaining what we’re going to face with what we do during the week before games and showing video on it. We have more video and technology than I can tell you.”

When game time comes around, Virginia Tech’s players know nearly everything that is out there to know about the opposing arm on the mound. Time and time again, it comes down to which player is going to execute better, the pitcher or the hitter?

“You can have all the plans and all the video and all the preparation in the world, but on gameday they still have to be able to execute,” Szefc said. “In a lot of cases they do, and in some cases they don’t. That’s usually what ends up being the difference between winning and losing. It’s just a matter of trying to put guys in the best position that you can between the preparation, the video, and trying to make them also understand that they’re in the right place and doing fine, it’s just you’re going to have some ups and downs that you’re going to have to deal with.”

When a young team like Virginia Tech goes through a little bit of a slump, it’s important to keep the energy flowing throughout the walls of the program. Szefc remains upbeat and sure that the Hokies are in a good position.

“It’s important to try to stay as positive as you can with guys and move on from games,” Szefc said. “You have to move on from innings, move on from games. In the past, we’ve had a 30-minute idea/rule. You have 30 minutes after the game to complain, be happy, whatever, and when that’s over it’s over. We’re trying to get back to that. This year you’re going to need it more than ever because of the ups and downs of the whole thing.”