Almost two years (98 weeks to be exact) after they last played in Tech Softball Park, the 18/16th  ranked Virginia Tech Hokies (10-3, 7-3 ACC) will host the Radford Highlanders in a doubleheader Wednesday. The two games are scheduled for 3pm and 5pm and will be shown on ACCNX.

The Hokies will have about 150 tickets available for the general public on a first come, first serve basis.

We're excited to announce that, after accounting for guests of the players and coaches, 150 spectators will be admitted on a first come, first serve basis

The Highlanders stand at 6-10 on the season.  However, they had won six of their last seven games before a 2-game sweep at the hands of East Tennessee State on Tuesday.  The Highlanders got off to a shaky start this season, losing their first seven games, including two run-rule losses to Georgia Tech (11-0, and 10-0).

Here’s the Tale of the Tape: 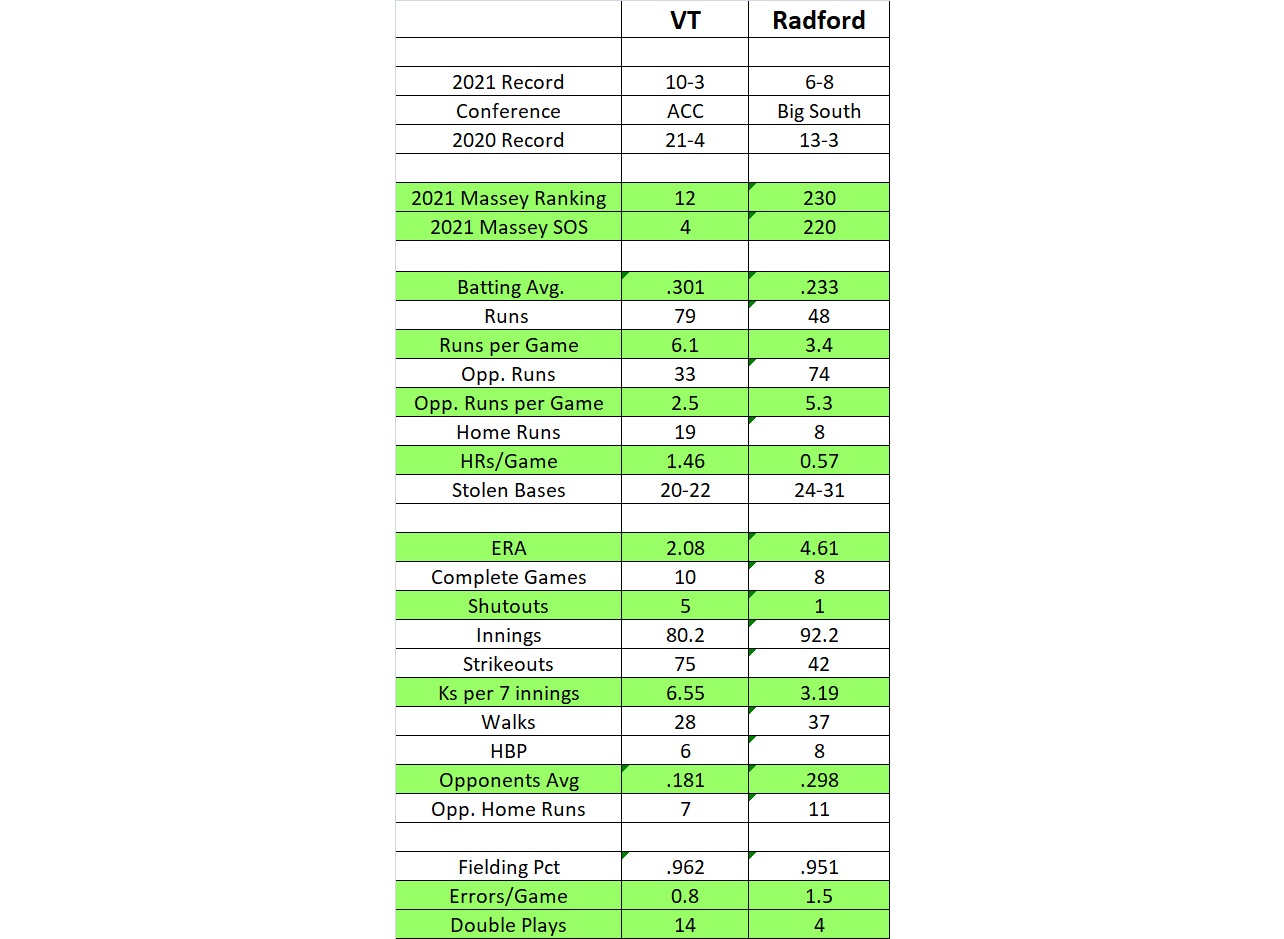 As excited as Virginia Tech softball fans are to FINALLY have the VT softball team playing at home, there is one group that is even more ecstatic – the parents of the Hokie softball players.

It has been a really difficult season for those parents.  Except for Clemson, they have had to watch their daughters play from outside the respective stadiums.  Depending on the ballpark, these views can be very restrictive – parents sometimes have to choose between seeing home plate or seeing the bases or seeing the scoreboard. But Hokie parents have become resourceful, building makeshift watch stands using cinder blocks, step ladders and anything else they can come up with to see their daughters in action.

“I’ve never missed one of Ivy’s games,” says Kimberly Rosenberry.  “She wants me to be there, even if it’s outside of the park, so I’m going to be there.”

“We are all here for the good of our children who have invested most of their lives (and ours) to play the game they love,” says Regis Slaw, Meredith Slaw’s mom. “As parents, it is so difficult to be shunned from the field.”

The problem is that every school sets their own rules for attendance – there are no universal (or even conference) guidelines.  Clemson allowed the Hokies 30 tickets for players’ families, but the other Hokies opponents have allowed zero.  The most head scratching was Georgia Tech, which hosted the Hokies’ series against Florida State. In spite of having the stadium marked off for social distancing, the Yellow Jackets elected not to allow fans for the VT-FSU game.  But as soon as that game ended and the Jackets took on Clemson, they opened the gates for limited fans.

NC State, like Kennesaw State and Georgia Tech, allowed no visiting fans, which is especially frustrating to the parents who could easily solve the problem if only asked.

“At NC State,” says Slaw, “there was a long fence line on the third base line that we could’ve had separate wrist bands noting our ‘location’. We would have been totally away from NC State fans. Instead, we were behind a gated fence unable to see our girls at bat or see the scoreboard.”

So, it’s understandable that the Virginia Tech parents are looking forward to the friendly confines of Tech Softball Park this week – in more ways than one.  Not surprisingly, the VT program is taking the high road and reserving a block of tickets for the families of opposing fans as well as reserving tickets for Hokie families. It’s a shame more schools aren’t following suit.

So if you see some Hokie fans yelling and screaming like crazy men and women this week, you may be watching proud parents seeing their youngsters up close for the first time this season. Scream away, moms and dads!

Below are the individual player stat comparisons.