Virginia Tech softball began ACC play this week by winning two out of three games against both Clemson and No. 13-ranked Florida State. The four victories were all convincing wins, including two run-rule games (9-0 vs. Clemson and 9-1 vs. Florida State). The other two wins were Keely Rochard shutdown games, 4-1 versus Clemson and 6-0 versus FSU.

“I’m very proud of the way our team competed this weekend,” said Virginia Tech Coach Pete D’Amour. “We knew how good both Clemson and Florida State were, and we came out of the week with two series wins.”

The softball world has taken note:

The Hokies take it home!

And another one that I simply couldn’t avoid re-tweeting and commenting:

I LOVE it when @HokiesSoftball makes a statement. Today’s statement was “there’s a new sheriff in town.” More statements to come! https://t.co/lTlRXcqGLC

You’ll have to forgive Hokie fans if they’re a bit giddy over the series win over FSU.  Not only was FSU the preseason pick to win the ACC, but before Saturday’s Hokies’ win, the ‘Noles had won 13 straight in the series and 19 of the last 20.

Hokie pitching was its usual excellence this week, despite Clemson and FSU having potent hitting attacks. Hokie hurlers surrendered a total of nine earned runs in six games, holding the two opponents to a .179 batting average and recording 30 strikeouts in 37 innings. That was against two teams that averaged over six runs per game last season.

Keely Rochard was her usual brilliant self, allowing just three earned runs in 23 innings and striking out 24. In the Sunday finale, Rochard was dominant, throwing a one-hit shutout while striking out nine.

“I felt really good,” she said. “No soreness from yesterday and my ball was really spinning.”  FSU would certainly attest to that.

Tech’s freshmen pitchers also had some stellar moments during the two series.  Ivy Rosenberry threw her second consecutive shutout as she blanked Clemson 9-0 in five innings and Mackenzie Osborne pitched a total of five innings against the two opponents, surrendering just one hit and no runs.

The Hokie bats began to warm up this week as Virginia Tech scored 30 runs and hit almost .300 against quality pitching.

The Hokies have quickly gotten back to where every hitter in the lineup is dangerous.

Another important asset is the Hokies’ depth.  If they are not starting, Meredith Slaw, Maddie Rountree, Morgan Overaitis, and Cana Davis all give Coach D’Amour numerous options. All had hits this week in pinch hitter roles and all are capable of moving to the starting lineup, if needed. That may even vary by opposing pitcher and the situation.

Defensively, The Hokies’ performance was a bit bipolar. Defensive breakdowns caused significant damage in the two losses.   Against Clemson, an errant throw not only scored two runs, but it kept the Tigers alive in the inning, and Clemson’s Marissa Guimbarda made the Hokies pay with a two-run home run.  Against FSU, a combination of errors and ill-advised fielding choices (throwing to the wrong base instead of just getting the out) led to a six-run inning for the Noles.  Those mistakes are hard to survive.

However, the Hokies didn’t lose confidence, and in both cases, bounced back the next game to run-rule their opponent.

“I don’t know if I can explain it (the bounce back),” said Coach D’Amour.  “During the losses, we seemed to try to do too much when things started going sideways instead of getting sure outs. Next thing you know, they had big innings.”

But the defense recovered and in the other four games, the Hokies were almost flawless, committing just one error and executing five double plays.

“We learned a lot about our team this week,” said Coach D’Amour. “If we play acceptable defense and pitch like we have, this team will be tough. It was a very positive sign to see us respond after getting punched in the nose Game 1 against Clemson and Florida State.”

I certainly agree with Coach D’Amour.  More than ever, I really believe this team is good enough to make a lot of noise this season.  If they don’t beat themselves, they have the potential to win A LOT of games.

Now for D’Amour’s grades for the week:

The Hokies will potentially get a break in their schedule.  The Radford game that was scheduled for Wednesday has been cancelled –apparently due to field conditions at Radford.  The Hokies were already off next weekend, so there is a possibility of a couple games being added should an opponent be found.

We have added a home doubleheader vs. Army for this Saturday starting at noon

This was the first time that the ACC tried the Pod Play concept and personally I like it.  It adds two more ACC teams to each team’s schedule and I think that’s a good thing. The alternating of home and away team added a sense of fairness to the setup.

The Hokies drew a bit of a tough challenge in Clemson and Florida State, but now it looks like the Hokies are in a good place if they build on this week.

In the rest of the conference, Duke is off to a surprising start, going 4-1 in Pod Play and owning a win over #5 LSU.

North Carolina also went 4-1 in pod play, but their opponents were Boston College and Syracuse.

Notre Dame is 1-3 in the ACC, with Duke getting them twice and Syracuse winning their only matchup that was played (bad weather). 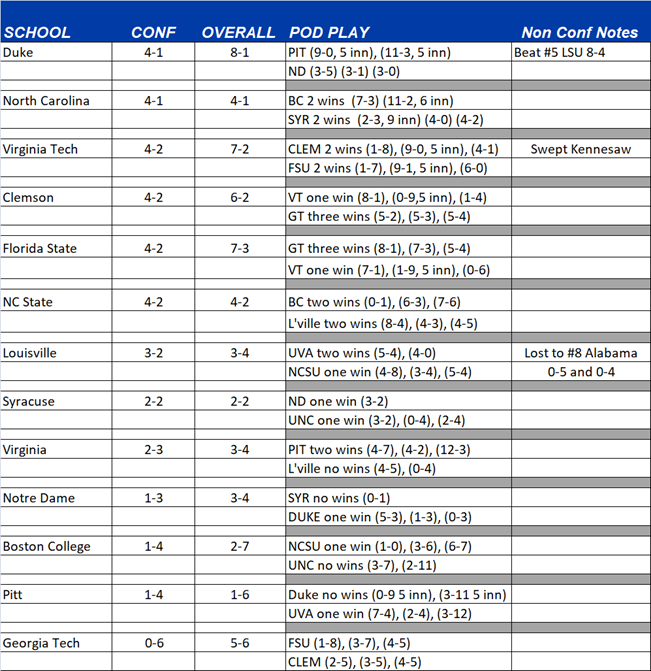 Should be an interesting rest of the season.