After a successful season-opening series at Kennesaw State, the #14/#15 Virginia Tech softball team will open ACC play this week with six “Pod Play” games.  The Hokies will play one game in Clemson versus the Tigers on Thursday (1:30pm) and two on Friday (noon and 2pm).    Then, the Hokies will travel to Georgia Tech for three games against #13/#14 Florida State – two games on Saturday (11:00am and 1:30pm) and one on Sunday (11:00am). It looks like all the games will be streamed on ACCNX.

Originally, all six games were scheduled to take place at Georgia Tech with the three teams playing the other two teams three times each, but the Yellow Jackets expressed concern about the number of games being played on their field, so the Tigers and the Hokies agreed to move their series to Clemson.  During pod play, teams will alternate home/away designations, so the Hokies will be the home team in game two at Clemson and games one and three against Florida State.

It’s unusual for week two games to be this significant, but this is a very unique season. These games should be a great measuring stick for all involved.

Here’s the Tale of the Tape for the three teams: 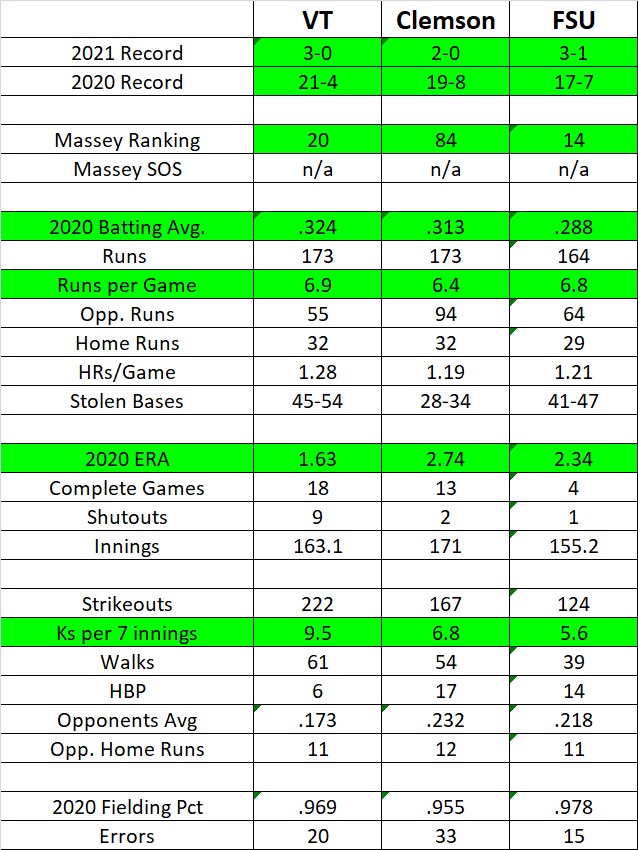 Clemson is a relative newcomer to the softball world, just beginning play last season. The Tigers play in a beautiful $14 million stadium that includes 1,000 chair-back seats, a 1,200-square foot clubhouse, an indoor player development hitting facility (6,000+ square feet), a press box with three broadcast booths, and a video board. If that’s not enough, just 10 days ago, the Tigers received a $2.5 million donation from the McWhorter family, so the stadium is now called McWhorter Stadium.

Clemson tapped former Team USA Coach John Ritter to build the program from scratch.  Ritter spent 18 seasons as the Head Coach at Stanford where he led to Cardinal to 18 consecutive winning seasons and 16 straight NCAA appearances.  Ritter also spent 10 years on the staff of Team USA, which won several Gold Medals during his tenure.

Last year, the Tigers finished the program’s inaugural season with a very respectable 19-8 overall record and a 5-1 record in the ACC (sweep of UVA, 2/3 vs. Pittsburgh). The Tigers return 16 of the 18 players from the 2020 roster, including seven of their top eight hitters who hit .290 or better.

The Tigers are led by two players that are rated among the Top 40 by Softball America – junior utility player Marissa Guimbarda (#32) and pitcher/utility player Valerie Cagle (#38).

Guimbarda was one of the best power hitters in the country last year, slamming 11 home runs, batting in 31 runs, and hitting .355. She went 3-for-6 in the opening weekend with a 2-run blast against Illinois State.

Cagle, a true freshman last season, does it all for the Tigers.  Last year, she hit .376 and not only led the Tigers in runs batted in (36), but also ERA (2.19), innings pitched (89.2), and strikeouts (87).  She hasn’t missed a beat so far this season, pitching a one-hit shutout against Illinois State and then blasting TWO 2-run homers to lead the Tigers over North Florida 4-3. She then entered that game in the 7th inning to earn the save. She truly does it all.

As one would expect with a young program, the Tigers have a lot of youth on the roster with 12 redshirt freshmen to go with seven true freshmen. They even use the term “double redshirt freshmen” to describe players that redshirted before softball began and then played last year, which didn’t officially count for eligibility purposes.

The Tigers hit .313 last season and seven of their top hitters return, led by “freshman” Hannah Goodwin, who led the Tigers in hitting with a .385 average, second in the ACC. She is joined by returning freshman Alia Logoleo (.345) and juniors Grace Mattimore (.333) and Cammy Pereira (.298).  Graduate student Casey Bigham transferred from Furman (where she was All-Conference) and was 3-for-6 in the opening weekend.

Pitching-wise, the second starter for the Tigers’ opening weekend was freshman Millie Thompson, who gave up two runs in four innings, before being relieved by another freshman, Regan Spencer, who pitched two scoreless innings before being relieved by Cagle. Freshman Logan Caymol (3.50 ERA), last year’s #2 pitcher, and the first signee in program history, also returns to give the Tigers depth in the circle.

“We have a great mix of upperclassmen and freshmen,” Coach Rittman told reporters before the season. “The leadership that our team and our upperclassmen provided last year and the familiarity with each other and the experience that we went through last year are only going to bode well for us this year…we’re super excited about our team.”

Any discussion of ACC softball usually starts with Florida State. The Seminoles have won 17 ACC Championships and played in the College World Series 10 times, winning it all in 2018.

“Florida State put the league on the map by winning the National Championship,” D’Amour told TSL’s Evan Hughes. “Everybody took notice and has had to up their game.”

The Seminoles went 17-7 during the shortened 2020 season, sweeping two early season games against #1 Alabama before losing four of five games at the Clearwater Invitational. For the season, the Noles hit .288 as a team and had a team ERA of 2.34.

The Seminoles have an interesting mix of new and old on the roster. They have players that played on the 2018 National Championship team, and they return four of five seniors for a bonus year. At the same time, FSU also has 15 freshmen on the team, including seven true freshmen in a class that was rated as the top recruiting class in the country.  That class is highlighted by speedster Jahni Kerr, ranked by Softball America as the #18 “Freshman to Watch.”  Alameda has described her as a player who “can do it all.”

Sherrill, who has been called “one of the best all around players in the nation,” was named D1 Softball’s Preseason ACC Player of the Year. She has played in 167 games as a Nole and has a career batting average of .374 and 32 home runs, 7th on FSU’s all-time list. Similar to the Hokies’ Kelsey Bennett, Sherrill is an excellent third baseman with a rifle arm.

Like Sherril, Shelnutt was named to the ACC preseason team.  She has played in 173 games in her career with a .273 batting average and 25 homers. She is an excellent catcher and has a fielding percentage of .990.

In the circle, the Seminoles seem to have an abundance of riches.  Sandercock was a five star recruit who was Virginia’s Gatorade Player of the Year in 2018. She has a career record of 23-1 and a career ERA of 2.25 to go with 88 strikeouts in 159 innings.

They are joined by junior Danielle Watson, who sat out last season after transferring from Louisville, where she led the Cardinals in strikeouts during her sophomore year and even tossed a complete game in the Cardinals’ NCAA regional win over Northwestern. Alameda describes Watson’s improvement as “incredible” and complemented her for putting in extra time in the offseason to improve even more.

Alameda likes her team a lot, noting that the Noles “have a lot of speed…is really deep in the outfield and in the circle…and I have more catchers than I have ever had.”

Wow.  This should be an AWESOME six games in four day stretch.

My impression is that all three teams have a lot of respect for each other.  In the preseason poll before Pete D’Amour’s first season, Coach Amameda gave the Hokies their lone first place vote (the rest of the coaches voted VT 10th).  The Hokies then proved her prophetic by winning the regular season. But two whole years have passed and the teams haven’t played each other. And, of course, this will be the Hokies’ first ever meeting with Clemson.

“Our conference is taking it to another level,” says Alameda. “Every weekend is going to be a dogfight.”

“We’re running the gauntlet this weekend,” says Hokie Coach Pete D’Amour. “Clemson may be the best second year program in history, and FSU is the standard bearer in the ACC and has been for years. Our team is in a good spot mentally.  We’re going to prepare like we always do and see what happens when Thursday rolls around.” 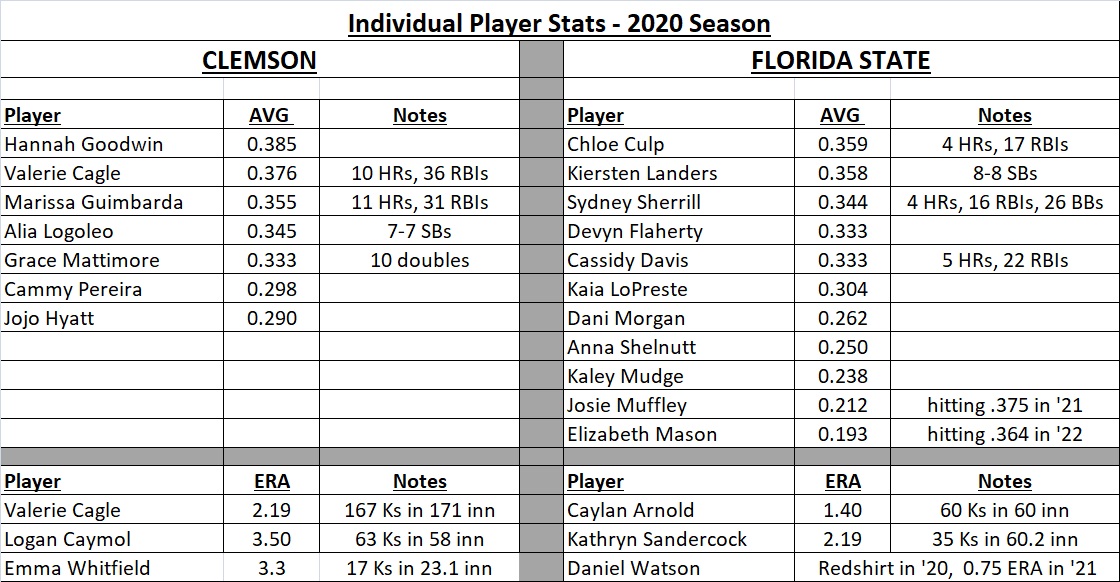