Virginia Tech’s 2021 football schedule was released this morning, debuting on the Packer and Durham show on the ACC Network. Highlights include a season-opener against UNC in Lane Stadium, a big trip to Morgantown against West Virginia as part of the non-conference slate, and back-to-back games to end the season against Miami and UVA. 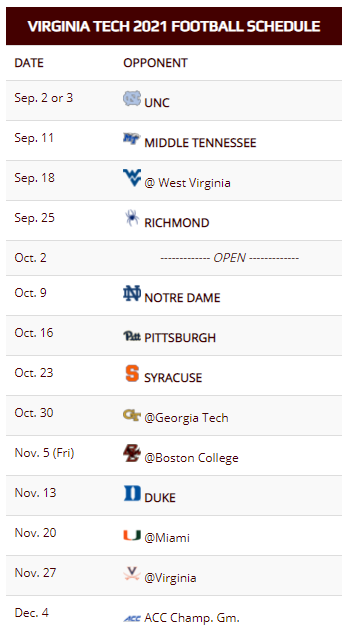 The Hokies have a front-heavy home schedule, while the second half of their season will feature many road games. For the first time since 1984, Virginia Tech will play six of its first seven games at home, with the lone road game coming on September 18 against West Virginia in Morgantown, WV.

Tech’s season opener will be held on either Thursday, September 2 or Friday, September 3 against Coastal Division rival UNC. Notre Dame visits Blacksburg on October 9, followed by Pitt on October 16 and Syracuse on October 23.

After that point the Hokies will play four of the final five games away from Blacksburg, including back-to-back road games against Miami and Virginia on November 20 and November 27. Duke is the lone home game during that stretch, with the Blue Devils visiting Blacksburg on November 13. The road game against Boston College will be played on Friday, November 5.

Here are links to complete information on all ACC football schedules, via TheACC.com:

We’ll have more on the schedule in an upcoming column later today.