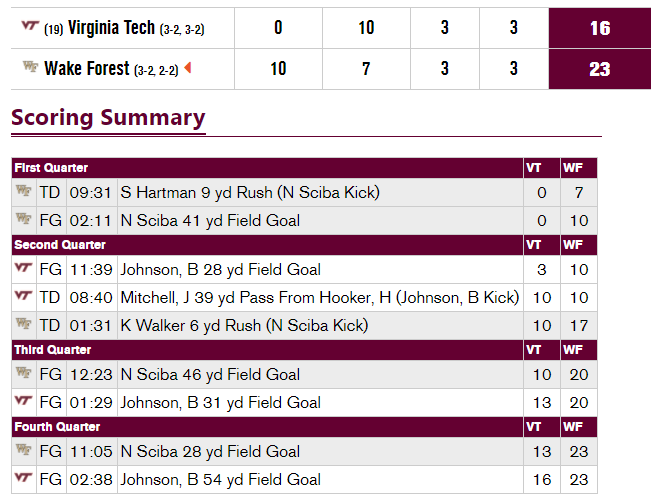 The old adage “any given Sunday” can be applied to Saturday as well. No matter how much praise and hype a team has received, they still have to take the field, line up across from the opponent, and get the job done.

Virginia Tech could not accomplish that task on Saturday afternoon. The Hokies (3-2) fell flat in Winston-Salem and lost 23-16 to Wake Forest (3-2).

“It’s my responsibility to get our team out there playing well,” head coach Justin Fuente said. “We made uncharacteristic mistakes. I don’t remember the last time we had that many penalties. Turned the football over, we were poor in the red zone. We weren’t good on third down. Just disappointed. We should have done a better job.”

Let’s take a deeper look at some of those areas that Fuente addressed.

It was an ugly display of discipline for Virginia Tech the entire game. The Hokies were flagged 10 times for 112 yards. Defensive tackle Jarrod Hewitt was ejected for targeting in the third quarter and flagged another 15 yards after he was officially kicked out of the game, throwing his helmet on the field, irate at the call. What would have been a sack instead pushed the Demon Deacons 30 yards down the field. Nick Sciba connected on a 46-yard field goal on the drive to extend Wake’s lead to 20-10.

On another occasion in the fourth quarter, the Hokies gobbled up Wake’s Kenneth Walker in the backfield at the Tech 25-yard line on third-and-goal. It would have forced a 42-yard field goal, but instead, Norell Pollard pushed Walker after the play was blown dead, earning a personal foul penalty to give the Demon Deacons a first down. As a result, Wake drained more clock and Sciba connected on a much shorter 28-yard field goal to push the lead to two scores again, 23-13.

“Unforced penalties, and I’m not talking about the targeting deal,” Fuente said. “I’m disappointed in Jarrod after that. We had one on Norell. The way it’s officiated with targeting is what it is, but it’s the other ones that are unforced penalties. It’s just been uncharacteristic of us. We haven’t done those things. It’s not who we are and who we’re supposed to be. We just can’t hand people things. It’s too competitive of a league. Everyone is equal to hand them yards on penalties and turnovers.”

In the four previous weeks, Virginia Tech averaged 4.75 penalties for 37.25 yards. So how will the Fuente and Co. address it moving forward?

Virginia Tech came into the contest averaging 42 points per game. On Saturday, it was able to string together just 16 points over the course of the game.

Even worse, the Hokies crossed midfield on 8 of their 11 drives and still couldn’t score on a consistent basis. It was a number of issues that culminated in Virginia Tech being unable to punch the ball into the end zone.

Hooker, who finished 17-of-33 passing for 223 yards and a touchdown along with 98 rushing yards, threw a career-high three interceptions, all to Wake Forest freshman walk-on safety Nick Anderson. Trailing 17-10, Hooker led the Hokies down the field into the red zone before the end of the first half, only to throw a pick in the end zone on third down.

“Anytime you get the ball down there and don’t get any points, it’s a big deal,” Fuente said. “I thought we responded well. It was not a positive thing going into the half, but our guys handled the halftime and what we were doing better. I told the guys on offense, ‘Would you have felt better if you went three-and-out?’ You drove the ball all the way down there and we had a turnover. Obviously, it wasn’t good, but I didn’t think it was a soul-crushing event that happened that we couldn’t recover from.”

It was a well-executed gameplan from Wake Forest’s defense that keyed in on Khalil Herbert. The Demon Deacons loaded the box and were not going to let Herbert single handedly beat them after he had done so time and time again for the Hokies this year. The graduate transfer was limited to just 14 carries for 64 yards.

“They did a really good job up front just playing tough,” Herbert said. “They must have studied a lot of film because they were able to do their job and do their assignments and be where they needed to be.

“We have to capitalize on when we make plays and go score. We’ll look at the film and get better for next week.”

As a team, the Hokies, who came in averaging 312 rushing yards per game, still ran for 210 yards on 43 carries, but a lot came from Hooker (17 carries, 98 yards) improvising to gain yardage with his legs.

“You want to hit that 300 mark every game,” center Brock Hoffman said. “It’s obviously frustrating when you can’t run like we have before in games. We’re just going to get back to it and work our tails off. Get back to that next week.”

With no rushing attack to lean on, Hooker and the passing game struggled to make plays through the air. He connected with James Mitchell for a 39-yard touchdown in the second quarter and hit Herbert for a 35-yard screen pass. Otherwise, no chunk plays were made as the receivers couldn’t get separation and Hooker was off target most of the night in the passing game. Brian Johnson also went 3-for-5 on field goals, missing attempts from 42 and 51 yards.

“They play a little bit of a bend-but-don’t-break defense,” Fuente said. “They came and challenged us a little bit more on the outside. We really didn’t make any big plays I thought in the passing game. We ran the ball still okay against a pretty loaded box. We really didn’t make very many plays … throwing the ball. You can look at the passing yards. We weren’t very effective down there.”

“It’s not been the normal, but it is a part of the game,” Hooker said of his interceptions. “It’s the same as getting tackled or scoring a touchdown. It’s a part of the game. Just gonna put my head down and keep working. Staying positive, lifting my teammates up, and coming to practice with a great attitude.”

By no means did Virginia Tech’s defense lose the game. Coming into the game if you had said the Hokies would allow 23 points, you would probably take it. However, there were still several frustrating moments.

In the first half, Wake Forest was more physical than Virginia Tech at the point of attack. The Demon Deacons were the tougher team and rushed for 236 yards, led by Christian Beal-Smith, who tallied 129 yards on 13 carries. One drive still sticks out.

Tied at 10 apiece in the second quarter, Wake ripped off a 17-play, 75-yard touchdown drive that took off over seven minutes of clock. The Demon Deacons converted three fourth downs on the drive and Kenneth Walker finished it off by carrying four Hokie defenders into the end zone after he was seemingly wrapped up for no gain.

“I felt like it was going to be that kind of game,” Fuente said. “They were going to go for it on fourth-and-short. That’s kind of become the norm a little bit more in college football. We held them to 23 points. We should have played better all around.”

The Hokies limited Wake’s Sam Hartman to just 110 yards passing. In the second half, Justin Hamilton’s unit allowed just six points and forced Hartman and Co. to go 0-for-5 on third downs.

“The first half we were just a little bit out of our gaps, missed tackles and things like that,” said linebacker Rayshard Ashby, who recorded seven tackles and a sack. “The game plan stayed the same. They made minor adjustments. It was just on us to get better.” 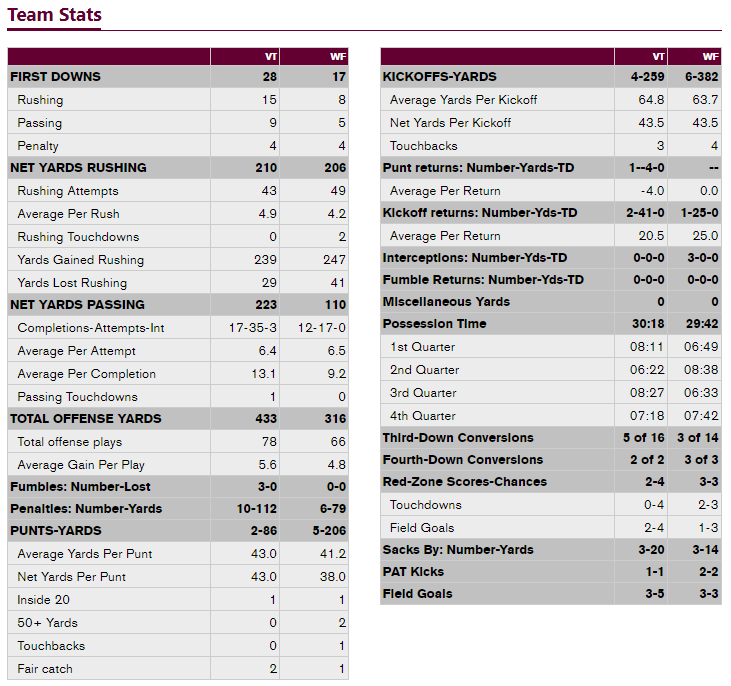 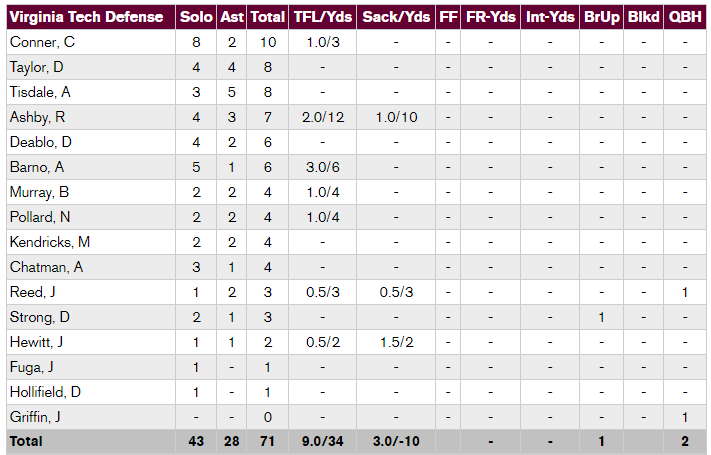