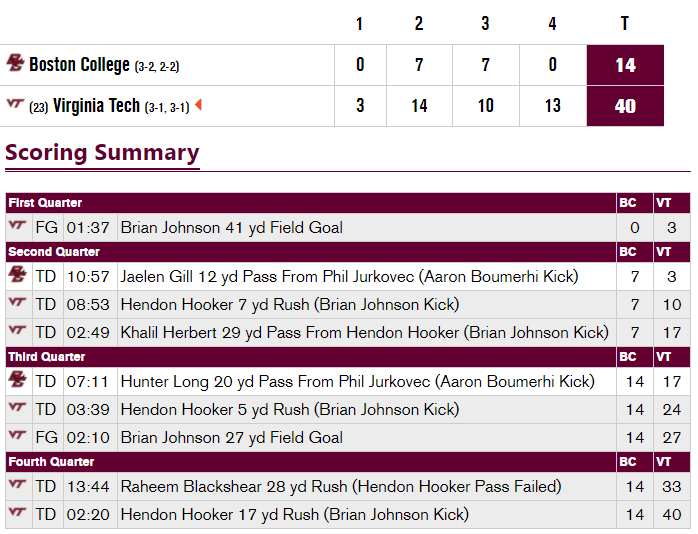 Teams across college football are shifting toward pass-heavy, air raid attacks. It’s commonplace to see quarterbacks light up the scoreboard for over 400 yards passing.

However, Virginia Tech is doing it in a completely different way. The Hokies (3-1) used the rushing attack of Hendon Hooker and Khalil Herbert to flatten Boston College (3-2), 40-14. The Eagles helped Tech’s cause by turning it over five times, but that doesn’t take away from what the Virginia Tech rushing attack accomplished.

“Once we got it rolling, you never know what’s going to happen,” Hooker said. “We have such a special offense. You never know when that one play is going to break open for a huge gain or a touchdown.”

Hooker finished the game with a career-high 164 yards on the ground while Herbert added 143 yards with his legs. It was the first time since 2010 that Virginia Tech had its quarterback and running back both rush for over 100 yards, when Tyrod Taylor and Darren Evans did it against NC State.

In Hooker’s first start of the season, the redshirt junior was simply sensational. His 164 rushing yards were the most by a Virginia Tech quarterback since Michael Vick’s 210-yard performance against Boston College in 2000.

“He’s just a dynamic playmaker,” Herbert said. “O-line does a good job of opening holes for either one of us. Some pull reads opened up and he was able to make plays with the feet.”

Hooker was efficient passing, going 11-of-15 for 111 yards through the air, including a 29-yard touchdown pass to Herbert. The Greensboro native was a huge threat in the red zone, lowering his shoulder en route to a 7-yard touchdown in the first quarter and following his blocking on a read option for a 5-yard score to extend the lead to 24-14 in the third quarter. Hooker put the nail in the coffin late in the game with a highlight reel spin move on the 17-yard touchdown for his third score of the game on the ground.

Herbert also surpassed 100 yards rushing for the fourth consecutive game. The last Hokies running back to do so was David Wilson in 2011. Raheem Blackshear got going in the action late with a 28-yard touchdown. The threat of those two in the RPO opened up the offense and allowed Hooker more space to operate for his big game on the ground.

“It makes the offense so much more dangerous to have [Herbert] and to have Raheem Blackshear as well who scored a touchdown tonight and is very explosive,” Hooker said. “I was very excited to see him be back to his regular self. It definitely helps the offense out in a big way.”

Virginia Tech ended the game with 350 yards rushing on 41 carries, good for 8.5 yards per carry. In all three of the Hokies’ wins, the offense has collected over 300 yards rushing. With the Vice Squad paving the way, Virginia Tech is now averaging 312.0 yards on the ground per game and it is due in part to the motivating tactics of offensive line coach Vance Vice and Fuente.

The Hokies’ defense used a bend but don’t break mentality throughout the course of the game. Despite giving up 435 yards of offense to the Eagles and 345 yards passing to Phil Jurkovec, the defense surrendered just 14 points.

The Eagles marched right down the field on the first two drives of the game, but the Hokies forced and recovered two fumbles. Early in the second quarter, Devin Taylor, who started at the free safety position, intercepted Phil Jurkovec for the Hokies third takeaway in four drives.

“I felt fortunate to be in that situation [with a halftime lead] because of those two turnovers,” Fuente said. “Those were big plays as we were trying to gain our footing defensively.”

Virginia Tech’s defense continued to find the football in the second half. Another fumble recovery in the third quarter and an interception late in the fourth quarter by Brion Murray totaled five turnovers for Justin Hamilton’s unit. The last time Virginia Tech’s defense turned the opponent over five times was in last year’s win over Miami. It was Hamilton’s first official win as defensive coordinator after missing the first two weeks and losing last week in his debut.

“Me personally, I have a really good relationship with coach Ham,” safety Divine Deablo said. “He came up to me and we hugged each other. I told him I love him and let’s keep it going.”

Virginia Tech will certainly look to keep things rolling when it hits the road next Saturday and travels to Wake Forest. Kickoff is set for 3:30 p.m. in Winston-Salem. The game will be televised on RSN (Regional Sports Networks). Check your local listings and look for an affiliate list to be posted in our game preview later this week. 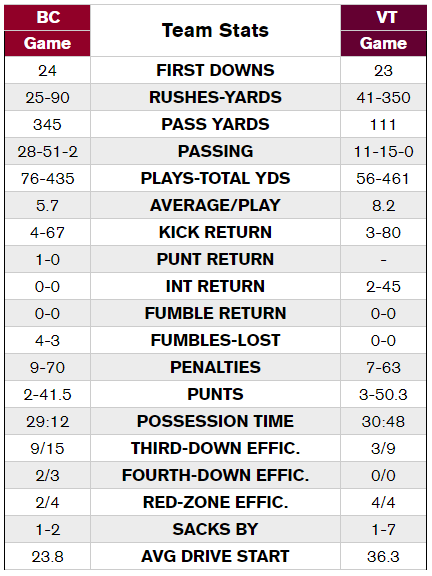 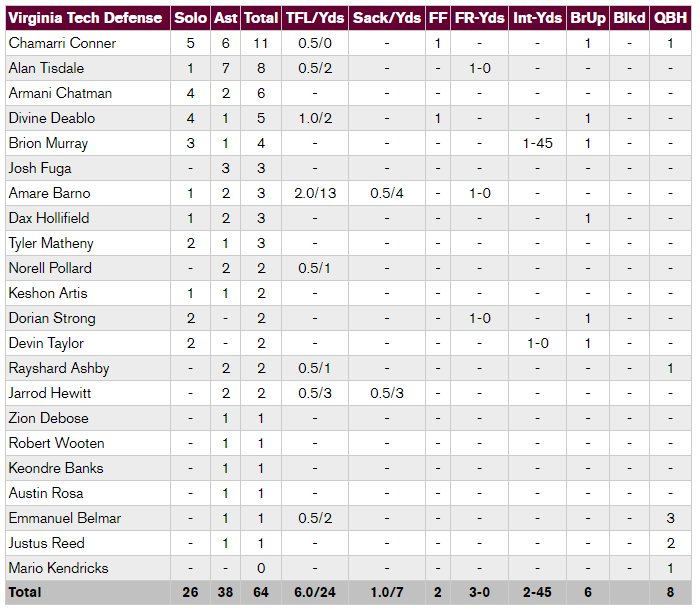