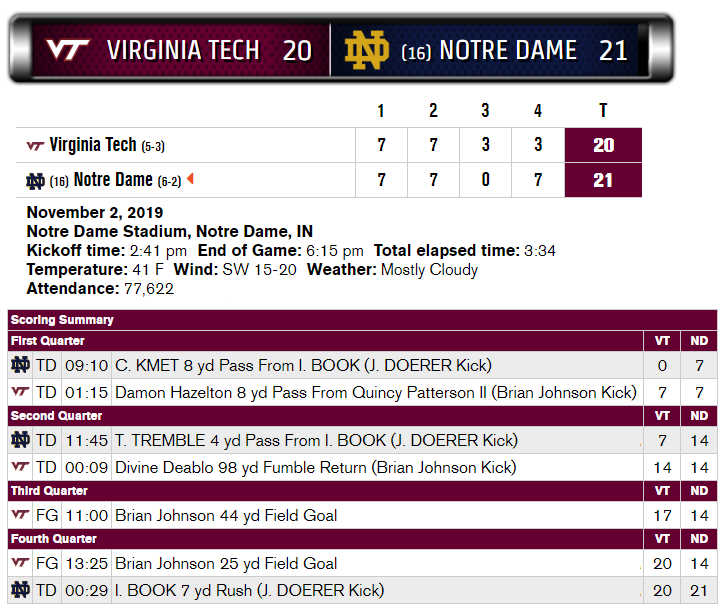 Virginia Tech has had its heart ripped out on numerous occasions over the years. Saturday night from South Bend added another one to the list.

Notre Dame quarterback Ian Book high-stepped into the end zone from seven yards out with 29 seconds remaining, and the ensuing extra point sunk the hopes of Hokies everywhere. Book’s game-winner capped off a 21-20 win for the 16th-ranked Fighting Irish (6-2) over Virginia Tech (5-3, 2-2 ACC).

“We were one play away in all phases of the game,” head coach Justin Fuente said. “You keep putting yourself out there long enough in competitive environments, we’re junkies for that, and sometimes it doesn’t go your way. You fall short and it hurts.”

The Hokies had Notre Dame on the ropes. Trailing 20-14, the Fighting Irish took over from their own 13-yard line with 3:22 remaining. One stop, one tipped pass leading to an interception, or one mishandled snap in the mixed precipitation and the Hokies would have pulled off the upset over the 17 ½ point favorites.

Instead, Book picked apart Virginia Tech’s defense with underneath passes, including conversions on fourth-and-3 and fourth-and-10, before sauntering inside the pylon untouched for the touchdown. Throughout the 18-play, 87-yard drive, Bud Foster continually dropped eight into coverage, and the Hokies were never able to get any pressure on Book, who finished 29-of-53 for 341 passing yards, three total touchdowns, and two interceptions.

“We clearly didn’t bring any pressure,” Foster said. “We were concerned about the quarterback. We lost a couple guys in the back end. Some of that probably affects our pressure package a little bit. We worry about that guy scrambling and getting out when you bring some pressure. We had a couple opportunities on some fourth down plays and we didn’t get any fourth down stops when it’s all said and done.

“I’m not going to sit up here and second guess myself. The kids played their tails off and I’m proud of them. I feel for them. I’ve been in three of these kinds of losses with Syracuse (1998) and BC (2007) and this game.”

Patterson got the start in place of the banged up Hendon Hooker and went 9-of-28 passing for 139 passing yards, one touchdown, and one interception on the final desperation play of the game. He added 77 rushing yards on 19 attempts.

“That was a tough one,” said Fuente on the decision to start Patterson over Hooker. “The bottom line is I couldn’t pull the trigger to put [Hooker] in. I just couldn’t. I’d gone back and forth with him. He didn’t take all the reps that he usually takes, but he practiced all week. He looked better and better every day.

“I couldn’t come to grips with putting a kid out there who’s played in two and a half games without the full complement of preparation time. If he’d been playing for two and a half years, I probably would have felt differently. I didn’t feel that it was in his best interest for his growth.”

The Hokies came into the game attempting to use a ground and pound gameplan to control the clock and play to the strengths of Patterson. However, it was no match for Notre Dame’s physical front. Six of the first seven drives resulted in three-and-outs. In the end, Virginia Tech ran the ball 36 times and only picked up 101 rushing yards (2.8 average). 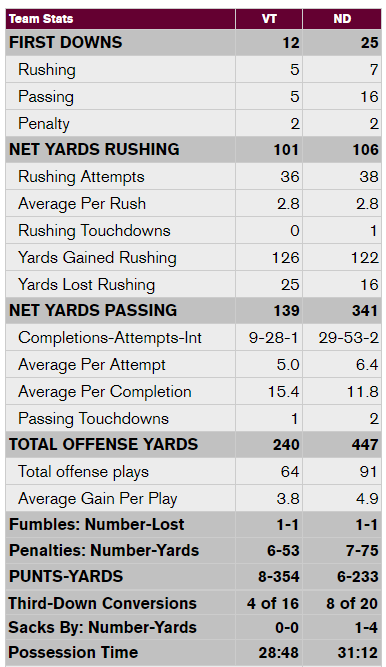 “They were not going to let us run the ball,” Fuente said. “They were stacked in there. I’m disappointed that we didn’t make more plays in the passing game. We didn’t create a lot of separation out there.”

Virginia Tech’s only offensive touchdown came late in the first quarter. Patterson connected with Damon Hazelton for an 8-yard touchdown on the third down back shoulder throw.

Leading 14-7, the Fighting Irish looked to put the finishing touches on the first half with a third-and-goal from the 1. Rayshard Ashby’s helmet met Jafar Armstrong in the backfield and popped the football out of his grasp. It landed right in Divine Deablo’s hands, and he returned it 98 yards for the 14-point swing and tying touchdown.

“That was obviously a big change in the game right there,” Foster said. “I just wish we would have held on in the end. That would have been one of the all-time great plays in Virginia Tech history.”

It was the type of play that swung all the momentum in favor of the Hokies. Ashby finished with a game-high 13 tackles. Deablo tallied five tackles of his own and intercepted a Book pass later in the game.

The fumble return was the longest in Virginia Tech history since at least 1987 when official records began to be kept. It was a huge performance from the redshirt junior who missed last year’s game against Notre Dame with an ankle injury.

“I can’t say enough good things about Divine Deablo,” Fuente said. “In the day and age of ‘I’ and ‘me’ and all that kind of stuff, Divine is a ‘we’ guy… We cheer extra loud when he does well.”

“I love Divine Deablo, No. 1.,” Foster said. “What you see is what you get. Every day he’s got a smile on his face and he enjoys coming to work and compete.”

Early in the fourth quarter with Virginia Tech ahead 17-14, Patterson found Tre Turner on the biggest play of the game, a 50-yard pickup down to Notre Dame’s 12 on third-and-3. On the first two plays, Patterson tossed incompletions. The signal caller then rushed up the middle for five yards on a play that would have been helpful on first or second down. Brian Johnson was forced to come onto the field for a 25-yard field goal.

Virginia Tech returns to ACC play next Saturday at home against Wake Forest. The Hokies will be without cornerback Jermaine Waller for the first half after he was called for targeting in the fourth quarter.

It opens the door for Armani Chatman to step into a bigger role in the secondary. Chatman entered the game and immediately intercepted Book’s pass on the next play, but it was called back for a questionable roughing the passer penalty on Eli Adams.

Foster will be honored pregame next Saturday before Virginia Tech takes on the Demon Deacons. The Hokies control their destiny down the stretch in the ACC Coastal division with games against Wake Forest, Georgia Tech, Pittsburgh, and Virginia remaining.

“The big thing is we can’t let one affect another game,” Foster said. “We’re going to go dive into the conference schedule, the meat of it. We’re getting ready to play a tough Wake Forest team. We can’t let this game affect the next one. We can learn from it, grow from it.” 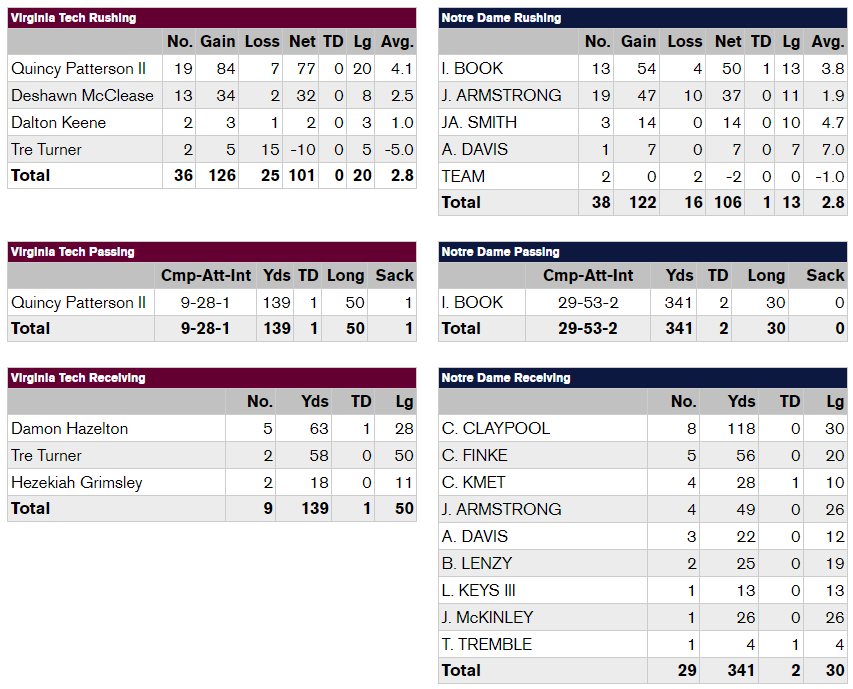